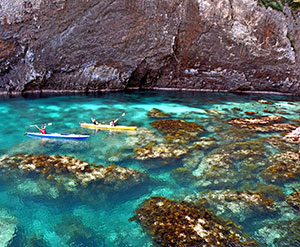 Viewed from the air, the Oki Islands of Shimane Prefecture look like verdant cushions gently sitting atop the Sea of Japan. As our propeller-powered aircraft descends through clouds, more details emerge. Rows of settlements, roads and waterways hewn out of earth sit in a great valley, connecting one end of the islands’ emerald seashore to the other.

On the ground, the perspective shifts entirely. Signs of human habitation seem few and far between. A few outbuildings and a two-storied airport terminal stand before us. Heavily forested mountains jutting out of the light blue sea frame the horizon.

We walk from our plane across the pulsating tarmac. The sun hovers directly above, the intense midday heat tempered by a soft breeze.

Within minutes, we clear the reception area and gather our luggage from the small carousel. As we emerge into the main area of the terminal building, Ryuji Miyahara and Teresa Sadkowsky, our guides, greet us with broad smiles.

A native of the Oki Islands, Miyahara is director of tourism promotion at the Oki branch of the Shimane prefectural government. Sadkowsky, who hails from Australia, is a coordinator of international relations on the Japan Exchange and Teaching Programme, who also works on the Oki Islands Global Geopark Promotion Committee.

“The vast nature—characteristic of the Oki Islands—and traditional lifestyles that remain here, have been identified by the United Nations Education, Scientific and Cultural Organization as something special”, Miyahara told BCCJ ACUMEN. “I think that visitors can experience this through interaction with the local people”. Sadkowsky heartily agreed.

Certainly, the Oki Islands’ natural endowment, together with its distinctive cultural assets and thoroughly agreeable locals, are a special combination.

In 2013, the islands became part of the Global Geoparks Network, which defines geoparks as “single, unified geographical areas where sites and landscapes of international geological significance are managed with a holistic concept of protection, education and sustainable development”.

Such designated areas, which may include a coastline, forest or rock formation, “may have aesthetic beauty or scientific importance—or both”, said Sadkowsky. 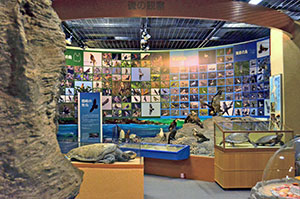 The Oki Islands UNESCO Global Geopark provides a number of services, such as local guiding, education including fieldwork with schoolchildren, and academic research in partnerships with universities. Located there are the Oki Nature Museum and Oki Islands Geopark Visitor Center, which has exhibits on the islands’ ecological and geological past.

Since the inception of the network in 1998, the number of global geoparks has grown to 120 in 33 countries as of June 2016. In Japan, there are eight, including the Oki Islands.

Located 40–80km off the coast, the Oki Islands consist of the Dozen Islands—Nishinoshima, Nakanoshima and Chiburijima—and Dogo Island, the largest of the four inhabited islands. There are also about 180 islands in the area that are uninhabited.

Due to the region’s geological heritage, a bio-diverse ecosystem has emerged that is distinctive, both on land and in the sea. This can be seen from the flora, fauna and geological features. 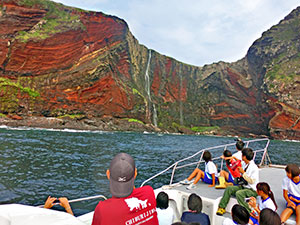 From the awe-inspiring Sekiheki Red Cliff and the ethereal Dangyo-no-taki Waterfalls to the enigmatic, 800 year-old Chichi-sugi (Japanese cedar) , the islands are a living natural history museum.

Anthropological evidence suggests humans have lived in the region for around 30,000 years. By the middle ages, the islands had become notorious for hosting noblemen in exile, such as the 14th century Emperor Godaigo.

Later, merchants sailing north along the Sea of Japan relied on the islands for ports, dropping anchor in inclement weather, in particular.

The sailing ships of the day, called kitamaebune, are also thought to have spread far and wide cultural trends like renge-e-mai, which is an ancient court dance of the Heian era (8–12th century).

Today, evidence of the islands’ affinity with the sea can still be seen in the fishing towns. One of the islands’ many charms is that small boats, anchored next to homes, line a myriad waterways.

Cultural forms of expression—such as the gore-furyu festival, where horses are led to the Tamawakasu-mikoto Shrine on Dogo Island—are also popular features of local life: “One of the things I really enjoy is the variety of cultural events on the islands”, Sadkowsky shared.

In early September, she explained, visitors can enjoy the Dangyo Shrine Festival. “When you get there, you’ll see a bull ring with people sitting around it on the hill. That is where you can see the bull sumo matches, which pit one bull against another. A winner is determined as soon as one bull turns away, at which point they are separated to avoid injury”.

The bouts are accompanied by people singing and cheering. “It’s an atmosphere that I’ve never encountered before, anywhere in Japan”, she added. 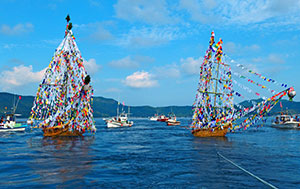 The calendar of festivals on the islands runs between April and November. One highlight is the colourful shara-bune (spirit boats) festival on 16 August when locals say farewell to their ancestors.

Activities are a hit, and include swimming in the sea (June–September), sea kayaking tours of coastal caves (April–October) and diving. There are also a number of immaculate beaches.

Recreational fishing is growing in popularity, perhaps having been given a boost when tennis champion and Shimane Prefecture local Kei Nishikori said he loves eating nodoguro (sea bass).

Cruises along the Kuniga Coast go past the jagged Matengai Cliff and through the Tsutenkyo Arch to the ghostly Akekure-no-iwaya Cavern. This 250m sea cave is locally known as the cave of light and dark.

Hiking through primeval forests with the Geopark-led eco-tours, picnicking at the stunning Akao Lookout on Nishinoshima Island, or camping in the idyllic Jodogaura Campground on Dogo Island provide endless wonders for visitors. And, each year, an ultramarathon of 50 or 100km is held on Dogo Island, while a half marathon is held on Nishinoshima Island.

“I love being able to jump into the car, drive a couple of minutes, and be surrounded by stunning nature”, said Sadkowsky, who has lived in the area for more than four years. 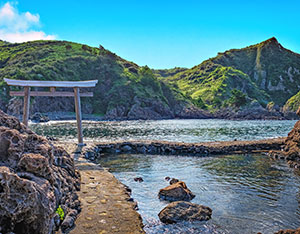 The first port of call during our whistle-stop tour was Saigo-misaki Cape Park on the southern coast of Dogo Island.

From a lookout next to Saigo-misaki Lighthouse, we enjoyed a breathtaking view of the rugged coastline as we strained to spy the enigmatic Tokage-iwa rock, which famously resembles a lizard. The rock is located on Mount Washigamine and Mount Tsuzurao, some 12km from the lookout.

After lunch and a pitstop at the geopark visitors’ centre, we drove past Tsuma Bay, stopping briefly to take in the fresh air, on our way to the spectral beauty of Dangyo waterfalls. Its kachi-mizu (winning water), which is said to bring good luck to those who drink it, is renowned.

Our thrilling experience around the islands had two highlights. The first was our overnight stay at Minshuku Tajimaya, a traditional family inn. Our host, chef and entertainer was the charismatic manager Yoshie Uno. Not only did she take care of our every need, including answering questions in English about Wi-Fi availability, but she also served up the most delicious local dinner.

A meal of fresh Oki rock oysters, sumptuous red sea bream sashimi—caught that morning by Uno’s fisherman father and son-in-law—delectable tofu and vegetable tempura, all washed down with the local sake, is the stuff of culinary dreams. 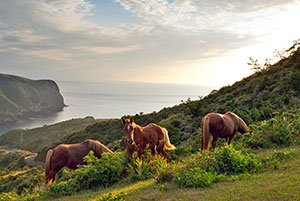 On top of that, she serenaded us with a sonorous rendition of four of the best local tunes to the accompaniment of a shamisen. All the while, her irrepressible smile did not leave her face.

The second highlight was the devastatingly beautiful view from Onimai Lookout on Nishinoshima Island. From there, you have not only splendid views of the Sea of Japan, but also verdant farmland. Enjoying the view, while cows and horses grazed lazily nearby, was satisfaction itself. Rumour has it that these are the happiest cows and horses in the world. It is easy to understand why.

Gilbert Murray, an Australia-born British scholar and public intellectual, played a key role in the International Committee on Intellectual Cooperation. This group advised the League of Nations, the forerunner of the United Nations, which established UNESCO Global Geoparks.

Similarities exist between the global geoparks of the Oki Islands and Shetland, the UK’s most northerly archipelago. While the climate is vastly different, both areas offer stunning coastal scenery, geographical and ecological attractions and a vibrant local culture.