For two days in early March, a little corner of Roppongi’s Midtown shopping complex was turned into a slice of the UK.

Office workers looked down from the towering block as an authentic Yeomen Warder—commonly known as a Beefeater—from the Tower of London posed for photos, while passers-by stopped to listen to a DJ playing tracks by the Rolling Stones, The Beatles and Queen.

A large crowd gathered to watch models strut their stuff in two fashion shows, one displaying the designs of Alice Temperley—the Duchess of Cambridge is famously a fan—and the second an exhibition of British Airways uniforms from the past 60 years.

The Big British Invite, jointly staged by VisitBritain and British Airways, was part of a new global marketing campaign to attract even more visitors to the UK by showcasing just some of the things for which we are rightly famous.

The team behind the new push dismissed concerns that the tourism industry might find it tough to follow up on the spectacular successes that the UK enjoyed on the international stage in 2012, including the pageantry of Queen Elizabeth II’s Diamond Jubilee celebrations and the 2012 London Olympic and Paralympic Games that many have acclaimed as the best in living memory.

“That’s what the common belief might have been, but there has been a huge amount going on post-games”, said Patricia Yates, director of strategy and communications for VisitBritain.

“We have already had the new James Bond film being released and the 50th anniversary of Bond”, she pointed out. “We were allowed to use Bond images for our campaign for free and we have just had the Oscars weekend.

“We think that this year, there are a number of new reasons people will come to the UK, including the 200th anniversary of Jane Austen’s Pride and Prejudice, 100 years of the RHS Chelsea Flower Show, the recent opening of The Shard, the tallest building in western Europe, and then in July, precisely one year on from the opening of the Games, there is the opening of Queen Elizabeth Park on the site of Olympic Park.

“On top of all that, the core reasons that visitors come to Britain are still there”, she added.

The UK’s tourism authorities learned from the experiences of other Olympic venues in years gone by. Instead of sitting back and assuming the job was done as soon as the Games were over, and that the visitors would continue to arrive, VisitBritain kicked off its new campaign on the very last day of the Paralympic Games.

The immediate result was that visitor spending in December was up 15% on the same month in the previous year.

VisitBritain has set itself an ambitious target of attracting 40mn visitors per year to the UK by 2020 and bringing in £31.5bn annually.

The four-point strategy to achieve that aim involves building on the UK’s image and playing to our strengths, ensuring that the travel trade is aware of the destinations that are on offer, improving the range of products that are available to travellers, and making it easier to get to the UK.

“Japan is one of our priority markets, we have a good staff here and this is a long-term project”, Yates told BCCJ ACUMEN.

“Japan is an interesting but rather distinctive market, with specific challenges. There are wealthy individuals and a greying population who are interested in the culture and history of Britain. But not enough of them are actually travelling [there]. We want to revitalise their interest”.

History and culture have long been a big draw, along with the UK’s world-class museums and shopping opportunities. However, one statistic that Yates and her team are aiming to rewrite is that fully 54% of visitors do not go outside London during their visit.

The Japanese actually buck this trend and do tend to travel beyond the capital when they visit. Yet, traditionally, they follow a route that includes the picturesque villages of the Cotswolds and Peter Rabbit country in the Lake District.

“We have to get them to explore and experience more”, she said. “There is so much more to Britain than a single city, and the scale of the country means that it is easy to get to, say, Scotland or Wales in just a couple of hours”.

With 85% of Japan’s long-haul travel organised through travel agencies, VisitBritain is stepping up its engagement with this sector to ensure that knowledge of what the UK has to offer is passed on to the consumer.

“We are not a single-product country, promoting only beaches or sunshine”, she stressed. “We have history and modern culture—fashion, music, football, shopping, gardens, golf and whisky tours. We need to focus on the interests of Japanese travellers and are here to talk about what the Japanese want and how—whatever their interest might be—they can find it in Britain”.

The local office of VisitBritain, headed by Ashley Harvey, is co-operating with Virgin Atlantic and online travel firm Expedia Inc. on their London Plus campaign to underline just how much more is available to see and do outside the capital.

“We know that people will visit London, because that is usually where they will land, but we are trying to give them something else”, Harvey said. “That could be something such as 72 hours in Brighton or three days in Scotland”.

“It’s a compact city but it has everything that a visitor would want”, said Harvey. “It’s a stone’s throw from Liverpool, north Wales and the Lake District. Beyond that, there is the north east and Scotland, so Manchester is a great gateway to a large part of the UK.

“We are launching a video campaign with Kagawa, with him talking about what he likes in the UK and what he has done”, he said.

“Football players have a different reach to people who are interested in history, for example.

“Kagawa has significant pull beyond football because he’s articulate, well-dressed and is a well-known face here in Japan”.

Yet the VisitBritain team knows there are some perceptions— some deserved, others less so—that need to be reversed.

“There are a few perceptions of Britain that we know we have to work on for the Japanese market”, Yates agreed. “We are never going to be seen as a cheap destination, but we are a good value-for-money destination.

“Our luxury products are very highly rated, while our pubs and bed-and-breakfasts, for example, are also very highly rated, so there are different price points. For shopping, we range from Burberry to Topshop, and we have to make sure that we get across the message that we offer value, whatever your budget”.

The other misconception that deserves to be righted is about British cuisine.

“I think our food is incredible”, she said. “We have seen a huge rise in interest in regional and organic produce, in many of our local dishes, food and produce. We have some great chefs who go out and promote British food and Jamie Oliver is one of our brand ambassadors”.

There are, for example, more than 150 restaurants in the UK with at least one Michelin star, putting the UK in the top five in the world for food.

“We have to get this knowledge over to people before they start thinking about travelling [to the UK]”, she added. 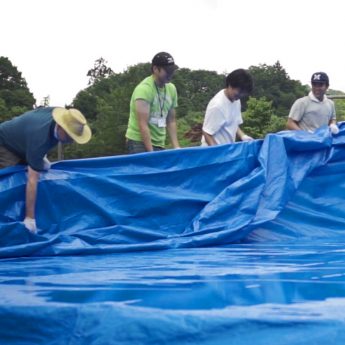 A mind for the other Walk on the Wild Side

A rising number of visitors to Japan want to take the road less travelled, opting for outdoor tours over sightseeing buses.