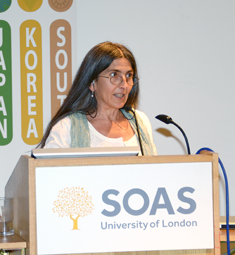 The use of honorifics in Japanese, the firm grasp among native speakers of what is being conveyed with the slightest inflection, the respectful bow, and a myriad of other signs, both spoken and unspoken, make this country arguably the most polite in the world.

And that makes it a fertile hunting ground for researchers who specialise in politeness in different societies.

Sponsored by the UK branch of the Sasakawa Foundation, the eighth International Conference on Politeness was held over four days at the University of London’s School of Oriental and African Studies. No fewer than one-quarter of the 51 research presentations referred to the Japanese language.

“Although of course it has a long tradition in Japanese scholarship, it is probably fair to say that it was brought to universal attention by the 1978 seminal work by Penelope Brown and Stephen Levinson, and has been booming ever since”, Pizziconi said.

A journal dedicated to research into politeness was founded in 2005, and the field is constantly expanding as the notion of politeness—which must also take into account impoliteness—is understood in broader terms, she said.

There is also growing recognition that the study of the language of social relations should not be a purview of honorific-rich languages like Japanese, she said.

This year’s conference attracted more than 80 participants. It focused on teaching and learning politeness and exercising social relations through language.

“This aspect of the phenomenon of politeness has not received sufficient attention so far. [This is] in spite of the fact that the social transmission of politeness norms is a fairly tricky business, both in a first language—children’s education and socialisation to the norms of a community—and of course in a second language, such as the instructions to language learners in language classrooms, textbooks and so on”, she said.

For researchers in this area, in which Pizziconi is recognised as a world leader, Japanese is prominent not only in terms of the theoretical challenges it poses to conventional wisdom, but also in quantitative terms. This is due to the amount and scope of research available on the subject.

And while newcomers to Japan are inevitably impressed at how polite and considerate Japanese people are towards those around them, Pizziconi said it is not possible to quantify politeness in a language.

“Although some languages, such as Japanese, may have dedicated linguistic devices specifically devoted to the expression of politeness-related meanings, polite attitudes and polite behaviour can and are expressed in any language—even in the honorific-poor English”, she said.

To illustrate, Pizziconi highlighted the different intonations that can be used for a request and indirect forms such as “would you mind doing this” rather than “do this”.

“Moreover, when we think about politeness, we should not confine it to verbalised behaviour”, she said. “Language is not a separate, independent mode of communication, and polite signals can be expressed in many forms, such as body posture, clothing, and various other norms of behaviour.

Pizziconi has focused on this topic for 20 years and said she felt, from the start of her research, that much more emphasis needs to be placed on other mechanisms and strategies that are available in Japanese to express polite meanings.

“We must study the whole gamut of signs available to speakers to express their evaluation of status or rank, affective stances such as respect, social distance, disdain or aggressiveness, or even to project specific social personae”, she said. “The manipulation of honorific systems plays only a partial role in this semiotic behaviour”.

As well as a theoretical significance, such as the linguistic mechanisms available to verbalise polite meanings, the study of politeness has many real-world implications, she said. This would include the analysis of misunderstandings in communication.

“Second-language users, for example, often find themselves in confusing, stressful, or even conflictual situations, due to the fact that their notion of what constitutes polite or impolite behaviour is at odds with that of native speakers”, she said. “Explicit instruction—which politeness research can inform—can help them cope with this incongruence”.

Foreign business people often complain about the low level of spoken English among their Japanese contacts, while human resources managers at Japanese firms complain that employees’ English is inadequate. However, on the basis of having taught English and run corporate training programmes in Japan over the past six years, I know this is not true.

Not Lost in Translation

With Europe’s longest place name—Llanfairpwllgwyngyllgogery-chwyrndrobwllllantysiliogogogoch—Welsh can be more like an exercise in tongue twisting than a language. Yuko Nakauchi, however, has got her vocal chords around all those tricky consonants and stray vowels and so was, in May, named winner of the British Council Japan’s inaugural UK Alumni Talent Show for people who had studied in Britain.