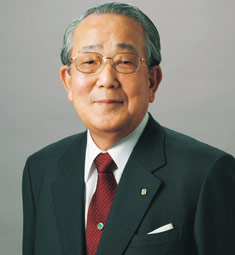 Conventional wisdom has it that whether a firm prospers or fails depends on its financial and creative capabilities, as well as its corporate strategy.

And while Dr Kazuo Inamori agrees these are certainly key factors, he believes intangible elements are far more critical to a firm’s well-being.

Addressing an audience drawn from the spectrum of UK firms in Japan at a British Embassy Tokyo event in April, Inamori stressed the importance of the mentality of a firm’s employees and its corporate culture.

Inamori is the founder of several firms, including Kyocera Corp., a Kyoto-based outfit that has grown into a world leader in advanced technology. The business icon also set up the Kyoto Prize in 1985, and was ordained as a Buddhist priest in 1997.

But of all the challenges he took on, it is rescuing and rebuilding Japan Airlines (JAL) that is likely to go down as his most remarkable achievement.

The methods he used to turn around the firm—which was the nation’s largest non-financial enterprise to file for bankruptcy protection since World War II—drew heavily on both his experience and personal beliefs.

This approach can be applied to any firm that is willing to change the way it does business, Inamori said.

“It all depends upon employees’ mentality, whether they have pride in the company, a strong desire to develop it, and a willingness to exert sincere efforts to achieve success”, Inamori told the symposium, which was sponsored by Rolls-Royce Japan Co., Ltd.

As the nation’s flagship carrier, JAL was at the forefront of Japan’s internationalisation throughout the 1980s, and grew as rapidly as the domestic economy.

That aggressive expansion strategy left little room for turning a profit, however, and the firm’s performance began to stagnate when the economic bubble burst in the early 1990s.

The decisive blow came with the Lehman shock. In January 2010, with debts of almost ¥2.3trn, JAL applied for protection under the Corporate Rehabilitation Law.

Inamori, who is in his 80s, resisted several requests from the government to help the ailing firm, saying he was too old and had no experience in the airline industry.

He finally capitulated, but severe restructuring measures had already been imposed on the airline, including the elimination of 16,000 jobs, salary cuts of up to 30% and a dramatic reduction in the number of routes.

Morale, he said, was at rock bottom. But five things turned that around.

“I think the fact that I assumed the chairmanship without pay affected JAL employees in tangible and intangible ways”, he said, highlighting the first reason for his success.

The second factor was identifying what Inamori terms noble causes, namely, three reasons that motivated staff to work harder. These were the effect on the national economy should JAL go under, the need to safeguard remaining employees’ jobs, and provision of stable air travel for the public.

The third element of Inamori’s plan was emphasising the objective of the rebuilt company, the “material and intellectual growth of all our employees”. Putting people over profit will improve their performance and benefit the firm in the long run, he said.

In tandem with this and despite their reservations, he required senior staff to undergo leadership training.

He instilled in them lessons such as humility and the pursuit of what is right. Such concepts were eventually embraced and trickled down throughout the firm.

The final change was the introduction of the Amoeba Management System, which required every division to give details of their expenditures and earnings. Inamori had also implemented the system at Kyocera.

Previously, he said, financial reports had been outdated and inaccurate. Now, everyone in JAL knows just how much they are contributing to the firm’s bottom line and takes responsibility for their section.

“By implementing these five factors while receiving encouragement from the people supporting us, all employees started to have a sense of mission that, ‘This is our company. We must rebuild it by ourselves’”, he said. “At the same time, a sense of unity was created as all employees saw they were in the same boat”.

As a result of Inamori’s efforts, JAL generated an operating profit of ¥188.4bn in the first year of its reconstruction, followed by ¥204.9bn for the year ended in March 2012.

“I believe that any company facing tremendous difficulties can not only overcome them, but also grow their business significantly, as long as all employees are united under their leaders and exert sincere efforts with an indomitable spirit”, he said.