A British pilot attempting to become the first person to fly an open-cockpit gyrocopter around the world has had to rethink the charity flight after waiting four years in vain for permission from Russia to overfly its territory.

Norman Surplus, from Larne in County Antrim, Northern Ireland, has appealed to the Russian government and its various agencies for permission to use an airfield in the Russian Far East after taking off from northern Japan and heading for the Aleutian Islands, in the US state of Alaska.

Privately, many of the Russian authorities that he contacted say there is no reason that 51-year-old Surplus cannot continue his record-breaking flight.

However, the country’s principal security agency, the Federal Security Service (FSB) of the Russian Federation, has declined to acknowledge his requests. Without their approval, Russia’s Civil Aviation Authority (CAA) cannot grant permission for the flight to enter Russian air space.

Despite sending several letters directly to the president of Russia, Vladimir Putin—even when Putin was in Northern Ireland for the G8 summit in 2013—Surplus has received no response.

Speaking to BCCJ ACUMEN, Surplus has admitted to being “hugely disappointed and frustrated”.

“We have tried everything we could think of to get the FSB to respond— including through their Foreign Ministry, the CAA and the British Embassy in Moscow—but we just can’t get a reply out of them”, he said.

“This is frustrating as we have no concerns about the aircraft, the route or the weather, but mostly because if the Russian side does have reservations, they could communicate that to us”, he added. “We could then change our approach or find some sort of compromise”.

“But our hands are tied; we can’t make them respond and after four years of trying we are going to have to skip that part of the route, and that’s a great shame”.

Surplus and his support team were forced to ship the gyrocopter to a port on the west coast of North America to continue the journey. The autogyro has the registration plate G-YROX and is nicknamed Roxy. She is currently stored in a temporary display at the Evergreen Aviation & Space Museum in Oregon, thanks to having received free hangarage over the winter.

Roxy will be in good company as the museum is also the home of Howard Hughes’s gigantic Spruce Goose flying boat.

Despite the problems so far, Surplus is determined to continue the flight, regardless of geographic or bureaucratic obstacles.

Certified by the Fédération Aéronautique Internationale as a world record circumnavigation, the flight was intended to travel about 43,452km over 24 countries. The terrain to be traversed includes deserts, jungles, mountains and oceans.

If successful, Surplus will be the first person to circumnavigate the globe in a gyrocopter. He is using the epic journey to raise awareness of, and treatments for, bowel and other forms of cancer.

Surplus himself underwent treatment for bowel cancer after being diagnosed with the disease in 2003, at the unusually early age of 40. The round-the-world flight is an indication of his determination to overcome the illness.

For his journey, Surplus is flying a two-seat AutoGyro MT-03, which is powered by a 115 horsepower 914 Rotax engine and has no autopilot.

The 5-metre-long aircraft can cruise at over 120km/hr, and has a maximum flight endurance of around 6.5 hours—enough to cover around 900km. With an open cockpit, it is reminiscent of 1920s-era aircraft.

After leaving Northern Ireland, Surplus flew southeast over Britain, crossed the English Channel and traversed the Continent. Hopping across the Mediterranean Sea, he touched down in Egypt shortly before the nation was engulfed in its revolution. 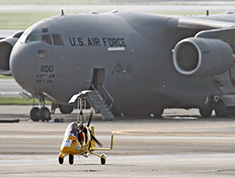 The gyrocopter lands at Kadena Air Base in Okinawa Prefecture. • photo: hitoshi maeshiro

He continued his journey through the Middle East, breaking the world record for the distance flown in a gyrocopter when he arrived in Calcutta, India, in April 2010. From there, he crossed the subcontinent to Bangladesh and continued on through Thailand and the Philippines to Japan—the 18th country en route—in July 2011.


Appropriately, gyrocopters have a close connection with Japan thanks to the James Bond film You Only Live Twice. In the 1967 thriller, Sir Sean Connery flies an aircraft, known as Little Nelly, against the forces of evil genius Ernst Blofeld, whose headquarters are concealed inside a volcano.

Even before coming up against the intransigence of Russian bureaucracy, Surplus’s journey had not all been plain sailing. He had to fly across raging forest fires in India, which was no small feat in an unprotected cockpit only a couple of thousand feet above the ground.

The pilot also had to make two emergency landings, one in the desert of Saudi Arabia, and the other in a lake in Thailand.

When planning the round-the-world route, Surplus explained that travelling from Japan across the Pacific Ocean by island hopping had been considered. However, while feasible in western parts of the ocean, the distances between potential landing sites in the eastern reaches made it impossible.

This made the northern route—from Hokkaido to Russia and on to Alaska—the only feasible path and, even then, only in the benign summer months.

Because of the distances involved, Surplus would require a minimum of one refuelling stop in Russian territory. Although he has received permission to land for this purpose from no fewer than eight airfields in the region, he has been denied the opportunity by official silence.

“It is not as if a global world record attempt such as this poses any sort of meaningful security issue for any particular country”, Surplus said.

“Rather, it should be held up and viewed for what it is: a friendly, positive symbol of international cooperation, much like any other truly global sporting event, such as the Olympics or the football World Cup.

“Those events would simply not happen unless all the participating countries agreed to work together simply, and for no other purpose than, for the advancement and celebration of sporting achievement throughout the world”, he added.

“The world community is enriched by such events, and they are a constant reminder of our common humanity on this planet”.

Timing is important in order to keep to the schedule of making the potentially hazardous crossing to Greenland in June or July 2015. The final leg of his journey will take him to Iceland and back to Larne.

“Even though gyrocopters have been around for 90 years, this remains the last type of aircraft that has yet to fly around the world”, Surplus explained. “We will build the campaign again and finish the circumnavigation; it’s just a pity that it will have to be without the Russian leg”.

Brompton: on the right track

The colour and compact size of the British firm's bicycles have proven popular here.