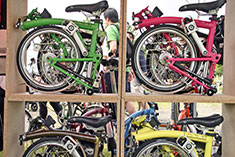 Brompton bicycles are compact and sold in a range of colours.

Glorious eccentricity is a hallmark of the British, but the enthusiasm with which the Brompton Japanese Championship was embraced suggests that national absurdity might just be infectious.


Staged at a park on the beach close to the Makuhari Messe international convention complex, in Chiba Prefecture, the day-long event attracted around 400 dedicated Brompton bicycle owners. They competed to take part in the world finals of the event which was held at the Goodwood motor circuit, England, in July.

Many of the riders—and plenty of the spectators—got into the spirit of the 13km race by celebrating the Britishness of the bike. Union flags were in abundance, and were also featured on socks, braces and hats. Other racers opted for bowlers, top hats and even a fetching deerstalker.

One cyclist took part in a blinding-yellow suit and top hat, competing against pedal pushers in immaculate white dinner jackets, or plus fours, full formal office attire and bow ties. One competitor went as far as a cravat.

“It’s great fun”, said Will Butler-Adams, managing director of Brompton Bicycle Ltd., of the competition. “We have these qualifying races in 14 key markets around the world, but the Japanese really do pull out all the stops. It is all done with such gusto”.

Working with local distributor Mizutani Bicycle Co., Ltd., the west London-based firm sold around 4,500 of its iconic bikes in Japan last year. Both businesses have high hopes for the market here.

“We first started importing Bromptons in 2004, because it was clear from the very beginning that they are perfect for this market”, Makoto Nakane, president and CEO of Mizutani Bicycle, told BCCJ ACUMEN.

“Firstly, there’s the compactness, as it folds down very small, which is ideal for Japanese homes”, he pointed out. “But it is still rigid and strong. It comes in a lot more colours now than it did initially, while a lot of our lady customers like the Brompton because it is so fashionable. 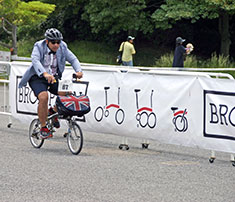 Union flags were popular at the event.

“And when we do our marketing, we play up to the fact that these are high-quality bicycles; they are unique, reliable and made in England”, he said. “Japanese do love to see the Union Jack on your products”.

“Our bikes resonate with cyclists here”, Butler-Adams agreed. “But it’s far bigger than that”.

“The world’s populations are still migrating to cities and there is less and less space in those cities”, he said. “In the West, the biggest problem facing governments and societies is the health of their citizens”.

An inordinate percentage of the money allocated to addressing health issues is spent on lifestyle-related diseases that are brought on by poor diet and, increasingly, a lack of exercise. Studies suggest that as little as 20 minutes of light exercise every day will cut, by around 60%, the likelihood of lifestyle-related illness in people aged 60 and over.

“That is why cities like London, New York and Paris are putting in bicycle schemes”, Butler-Adams said. “It’s not to reduce congestion; it’s to make people more healthy”.

Japan has also discovered recreation over the past 20 years, he explained. This development has created a whole new leisure sector, and has had a positive impact on firms such as Brompton.

Yet, he warned that, in the years to come, Japan faces some of the same problems that have afflicted the West, and some fundamental issues need to be addressed.

There are a number of impediments to people cycling to work, he said. For example, some firms pay their staff’s commuting costs, meaning there is no incentive for workers to try to save money by getting on their bikes. Additionally, businesses are liable for staff who cycle to work.

In stark contrast, firms in the UK buy fleets of Brompton bicycles, paint them in their corporate colours and tell their staff to hit the road.

There are around 70,000 Bromptons on the streets of London, although a mere 4% of residents in the city go to work by bike, Butler-Adams said. In Copenhagen, that figure is 47%.

While it may take a while to convince Tokyo’s commuters of the benefits of cycling, Brompton is committed to working with the city authorities and the Japanese cycling associations to bring about the necessary changes in attitudes.

The British firm is also committed to the market here, with Butler-Adams describing it as “mega-important”.
“Japan sets trends”, he said. “People in South Korea, Hong Kong and Singapore look to what Japan is doing before trying something themselves.

“It is also safe to do business here”, he added. “The people you are going to be working with are trustworthy, honest and careful, as they think things through carefully. That sense of being nicely cautious is good for us”.

A British pilot on a round-the-world gyrocopter voyage is determined to complete the flight.