Mention Tohoku and most people instantly recall images of the Great East Japan Earthquake and Tsunami of 11 March, 2011. This is understandable and expected. But Tohoku wants to be known once again as more than just a region struck by disaster. Yet recent events and extensive press coverage—in Japan and abroad—make this difficult. 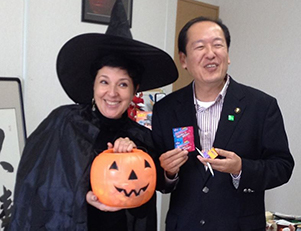 Miller and Mayor Toba bring Halloween to the kids of Rikuzentaka.

I have come to know the Tohoku region—speci­fi­cally the city of Rikuzentakata—well over the past eight years. Although I am American, I was born and raised in Japan and have spent about 25 years of my life here.

In 2011, I was back in Boston, Massachusetts, living with my husband and enjoying what we called our second honeymoon—our son having recently left for university. We had few complaints in our day-to-day lives. Then, on the morning of 11 March, I woke up to the news that Japan’s north-eastern coastline had been hit by a massive tsunami. That changed everything.

I unexpectedly returned to Japan several weeks later, having agreed to volunteer as an interpreter for a US disaster relief organisation. After a few days running in and out of the Embassy of the United States in Tokyo, I took a night bus and arrived in Rikuzentakata.

What I thought would be a stay of a few months at most ended up being much longer. Mayor Futoshi Toba asked me to remain, and Rikuzen­takata became my home for seven years.

Like much of Tohoku, Rikuzentakata is very isolated. This is rural Japan, personifying what is wonderful about life away from major cities as well as the downside of residing in a small town. The city is still very much an active construction zone, and with the anniversary of that life-changing date comes difficult memories. To share the experience with ACUMEN, I sat down with Mayor Toba recently to reminisce.

Mayor Toba takes a hands-on approach to rebuilding the community.

This was the first time in my life I knew what true despair was. I evacuated to the roof of the town hall and watched as the city was swallowed up, wave by wave. People were clinging to rooftops, cars, lumber—whatever they could grab on to—and screaming and calling out for help. All I could do was yell to them, “Hang on! Hang on! Don’t let go!” But I knew they wouldn’t survive. It was like a horror movie. I didn’t know immediately, but my wife was one of those who died. Her body was found a few weeks later. I became mayor, a widower and a single father all within six weeks. No one can possibly prepare for a major life shift such as this. My life changed forever. Everything changed.

How is the revival progressing?

This is a difficult question to answer. Rikuzen­takata’s population, today about 19,000, is largely elderly. It is similar to what you see in cities and towns throughout Japan. More than half of the people are aged 50 and older. It’s hard to ask grand­parents to be upbeat, cheerful and to look on the bright side. There’s not a lot to be happy about because recovery is painfully slow. It’s tedious and everywhere, every day there are reminders of loss, of what was, what used to be.

There’s also a general undercurrent of dis­satis­faction with me, the government and how slow the process is. I said before that no one can prepare for something like this, and I truly believe all manuals and handbooks on recovery policy are useless in the face of such a catastrophe. I’ve done the best I could as mayor over the past eight years, but I know many in the town are not happy; and this pains me.

Anything that brings in visitors and tourists is welcome. This, obviously, includes the Rugby World Cup. When you are a foreign guest, because you don’t blend in, people know you’re from out of town. It matters to us that you care and have taken the time and spent the money to visit. Whether they are here for the rugby or some other event, visitors make a difference to us. In many ways, you’re our sustenance—economically, morally and socially.

Where do you suggest rugby fans go?

The coastline in Iwate is stunningly beautiful and worth a drive. I have to pitch my city, though. Rikuzentakata is building a memorial park—what I like to call the Tohoku version of the memorial parks in Hiroshima and Nagasaki. We want people to come and learn about disaster preparedness, pay their respects regardless of religious pre­fer­ences—our facility is inter­denomina­tional inten­tionally—and see the beauty and power of nature. I hope they will take home stories of survival for future generations. 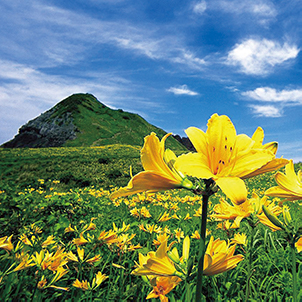