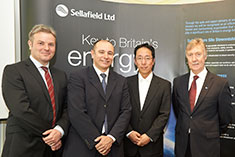 Representatives from the UK Parliament, REACT Engineering, TEPCO and Sellafield Ltd. at Cumbria in May.

From the first hours of the tragedy that hit north-east Japan on 11 March 2011, the government, people and firms of the UK came through with support.


Now, as the physical scars from the worst natural disaster to strike Japan in living memory begin to heal, Britain continues to provide its knowledge and skills to help Japan meet the challenges of recovery.

In particular, Brits are now coming to the table to help solve one of the most perplexing problems that emerged from the crisis: rendering the reactors at the Fukushima Dai-Ichi Nuclear Power Plant safe and, ultimately, completing the decommissioning of the facility.

The Sellafield site, in Cumbria, is the largest and most complex nuclear facility in Europe. It was first developed in the late 1940s to make plutonium for Britain’s defence programme.

That power was subsequently harnessed to generate electricity, with the Calder Hall plant switched on by Queen Elizabeth II in 1956, making it the world’s first commercial-scale nuclear reactor.

Fifty-eight years later, the lessons learned at Sellafield and other similar installations across the UK are being shared with the Japanese government and Tokyo Electric Power Co. (TEPCO), the operator of the Fukushima facility.

Decommissioning Fukushima Dai-Ichi is a task that has never previously been attempted. New technologies and approaches are constantly being devised, tested and tweaked to ensure that the eventual outcome is the optimum one, and British firms are enhancing their solid reputations in the sector.

“Nuclear operators around the world are very good at working together because the industry truly is a global network of partnerships and cooperation”, Ian Gordon, the head of external affairs for Sellafield Ltd., told BCCJ ACUMEN.

“The Nuclear Decommissioning Authority [NDA], which is responsible on behalf of the government for the decommissioning of all nuclear sites in the UK, led Britain’s response to the accident in March 2011”, he said.

“As the UK’s biggest site, it’s understandable that we were major contributors in that initial phase”.

Several experts from Sellafield have examined the Fukushima facility, while Japanese engineers and policy-makers have visited the UK to exchange ideas.

British firms and organisations have shared their own experiences on everything from environmental monitoring to the specifics of decommissioning techniques and stakeholder engagement, which builds on the long standing relationship, Gordon said.

Sellafield has worked closely with Japanese firms since the earliest days, when power stations were built according to the now obsolete Magnox reactor design, which originated in the UK.

The Tokaimura nuclear facility in Ibaraki Prefecture, which was Japan’s first commercial nuclear power plant, was built on that design. In addition, Japanese support was “crucial in the development and operation of the thermal oxide reprocessing plant [Thorp, set up on the Sellafield site] in the 1980s”, he said.

Since then, Thorp has been reprocessing fuel from Japanese utilities. This essentially involves recycling spent fuel into plutonium and uranium. About 97% of the original fuel can be used again.

The remaining 3% is reduced to liquid nuclear waste and transformed into solid glass form that can be more easily stored or disposed of than the original fuel. Waste from the reactors operated by TEPCO and other domestic utilities is shipped back to Japan after processing.

Britain was also involved in the operation of Japan’s mixed oxide plant, making fuel for the facility until the programme was halted in 2011.

“This latest cooperation agreement is a natural extension of an extremely successful relationship that is decades old and has led to many mutual benefits”, Gordon said.

Historic alliance
On 1 May, a deal described as “historic” by the two sides was signed at University College London by Prime Minister Shinzo Abe and Ed Davey, the secretary of state for the Department of Energy and Climate Change.

“We have much that we can help the Japanese with initially, as they move their focus from power generation to cleaning up and decommissioning”, said Tony Price, managing director of Sellafield Ltd. He emphasised that the arrangement is anything but a one-way street.

“The technical expertise of the Japanese is renowned the world over. They are experts in design and manufacturing and—judging by their past performance on everything from motorcycles to nuclear reprocessing—once they start decommissioning in earnest there will be much that they can teach us.

“What this cooperation statement will do is formalise a working relationship which has existed for 60 years, between the UK nuclear industry and the Japanese, and it opens up channels for us to work more closely together now and in the future.

“There are many similar challenges that we’ll be facing on our sites over the coming years and we can share our experiences, access to our supply chains and any advancements that come in the future”, Price added.

In Britain, Sellafield’s close ties with a number of industry specialists have led to opportunities at the Fukushima site for UK firms, such as REACT Engineering Limited.

Located just outside Whitehaven, on the West Cumbrian coast, REACT was founded in 1994 and has become a key provider of creative strategic and engineering solutions for nuclear decommissioning.

“We’ve got an engineer from West Cumbria out in Japan right now, working on the roof of the reactor at the Fukushima Dai-Ichi plant”, said Peter Woolaghan, founder and director.

“As an industry we need to work together and I’m delighted that we are able to help the Japanese”.

More than robots
Dr Keith Franklin, first secretary with responsibility for nuclear issues at the British Embassy Tokyo, believes the alliance with Sellafield is precisely what Japan’s utility firms required.

“TEPCO is an electricity generation company and they have had to learn how to be a decommissioning and clean-up company very quickly”, Franklin told BCCJ ACUMEN.

According to TEPCO, several elements of the overall decommissioning project at Fukushima are making progress.

A remote-controlled robot built by Swedish firm Husqvarma AB and modified by Toshiba Corp. has been deployed at the site. It commenced decontamination work inside the Reactor 2 building, where radiation levels are still too high for humans.

Equipped with 12 cameras to enable controllers to direct its movements, the robot is suctioning up radioactive dust from walls, cable trays and the surfaces of control panels as much as five metres above the ground.

Work is also progressing on an “ice wall” created by a network of pipes laid in trenches around the reactors and designed to stop ground water leaking into the basements of the reactor units and becoming contaminated with radiation.

“There is more to clean-up [operations]than just technology, and I feel that outside the industry people feel the answer is ‘we need fancy robots’”, Franklin said. “Robotic technology is needed in some instances, but it is more important to have your strategy and plan worked out.

“It is important to spend money in places where it will reduce the overall hazard by the biggest amount”, he added. “Japan realises that they need to benefit from those with experience in these areas, and this is one of the areas where we feel the UK can help”.

As of 16 June, 1,078 of the 1,533 fuel rods that were stored in the pool at Reactor 4 have been recovered and safely transported to a common pool at a more secure inland location.

“UK experts with experience in damaged fuel rods were involved in examining the methods which were to be used to remove the fuel from the fuel pond in Reactor 4”, said Franklin, who has been on secondment to the embassy from the National Nuclear Laboratory since 2011. “They were content with the proposed method.

“It is important to understand that removal of fuel from fuel ponds is an activity which goes on at every power station around the world on a regular basis”, he said. “There was potential for some of this fuel to be damaged, and the lifting equipment had to be reconstructed, which is why there was additional focus on this activity.

“British technology is currently being used on site, and British experts visit on a regular basis”, Franklin said. “We have been impressed at the speed of some of the projects; the emptying of the fuel ponds, for instance, has taken place very quickly”.

But the public and the media must understand that some tasks—particularly those that have never been attempted before—will take longer and it is “important to manage expectations”, he said.

“To quote Adrian Simper, the NDA director of strategy, Fukushima Dai-Ichi is no longer a power station having a bad day; it is a clean-up site having a normal day. The issues you see reported on a regular basis should be seen as operational problems, not incidents that will cause harm to health or the environment”, he said.

Changing mindsets, N-landscape
Other people agree that there is a need for better public understanding of an event portrayed in some quarters as one of the greatest industrial catastrophes to befall mankind.

On the contrary, explained Wade Allison, emeritus professor of physics at the University of Oxford, what has happened at Fukushima actually demonstrates the inherent safety of nuclear energy.

“The fear that people have of nuclear energy is completely unjustified”, Dr Allison said at a BCCJ event on his last visit to Japan. “The public reaction to the Fukushima situation has not only raised questions about radiation, but also about public trust—and I believe that is the more serious problem that we have to deal with”.

“We need a comprehensive education programme because the world is not capable of supporting 10bn people unless we face up to accepting nuclear energy”, he said.

As well as offering advice and technological assistance at the Fukushima plant, British know-how is being brought to bear in broader changes regarding the nuclear energy landscape here.

Invited in October 2012 to join a panel set up within TEPCO to institute a culture of safety throughout the organisation, Lady Barbara Judge is full of praise for what British firms and organisations have managed to achieve.

“Britain was the first to develop nuclear power plants and a lot of them are getting old now, so we have had to develop the experience to decommission them as well”, the two-term former director of the United Kingdom Atomic Energy Authority told BCCJ ACUMEN. “That has made us the best in the world at that task.

“Even though we are facing problems that no one has ever faced before, British companies excel at solutions. We have the skill and desire to see things through”. UK entrepreneurs find success in bringing Japanese products and services to the masses.