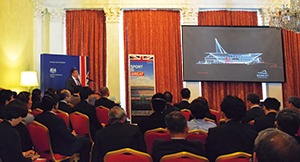 With the 2019 Rugby World Cup and 2020 Olympic and Paralympic Games approaching, Japan has a lot to organise and restructure. The Japanese government is aiming to boost the national economy by using sport stadiums and arenas in a more effective way, and the UK is seen as a model for success in the field.

With this in mind, a forum was held at the British Embassy Tokyo on 14 March with the aim of finding potential businesses with sports facilities and delivering excellence and leadership from the UK. Two UK speakers were invited to provide insight to a mostly Japanese audience.

Ambassador Paul Madden CMG’s opening remarks were followed by words from Hiromichi Moriyama, deputy director of the Industrial Structure Policy Division, Economic and Industrial Policy Bureau, at Japan’s Ministry of Economy, Trade and Industry. Andy Young from New Resolution, a firm helping stadium and venue owners maximise their opportunities, was Arena Director of The O2 Arena in Greenwich, south east London, when it first opened and head of event services for the London 2012 Olympic and Paralympic Games.

Generate revenue
Young focused his presentation on informing the keen audience how major venues can generate more money, and provided examples from his experiences at Wembley Stadium and The O2 Arena. “The people you employ are assets and resources. It’s only right that you think about maximising their use”, he said.

He highlighted the fact that a key feature of both places is that they were designed specifically to make money. “A stadium or arena provides lots of vast space. By designing [the space] carefully, it’s possible to use it in many different ways and to think of it as a commercial asset”.

Programming the venue is another key aspect that Young emphasised. It is important that a venue allows for ease in the setting up and dismantling of a variety of events, and provides good hospitality, allowing visitors to spend more time at a venue and spend more money there. He said it was crucial to consider investors in the hospitality industry.

“If you are effective in selling tickets, and you provide an excellent service to the customers who arrive, those guests will return”, said Young, claiming this to be the basic principle adopted when The O2 Arena opened. Event organisers will be delighted if the event sells quickly, and this will give them confidence to host more events. In short, the more events one hosts, the more tickets one sells, he said.

Young emphasised the need for clarity when defining strengths, weaknesses, opportunities and threats in the local market. 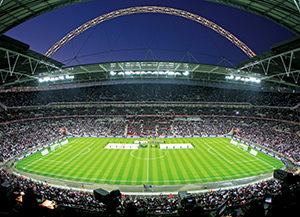 “Wembley is unique, so is The O2. You can’t just copy their model, it has to be appropriate. You have to understand the market context. You have to understand your own costs and revenues, so that you can be adventurous with your rentals, because you may need to take some risks when bringing events in that may be in their infancy”, he said.

If you increase the amount of time that people spend in a venue, this will also generate more revenue. As Young concisely put it, “If you cross a meal time, people will eat”.

Vaughn looked to see what various sectors were doing to engage people with technology. He looked particularly at the airport sector, the retail sector—mainly shopping centres—and restaurants in the hospitality industry. “We needed to bring that experience into the venue sector”.

He put all aspects that he considers related to technology in the hospitality industry under one umbrella, which he calls The Three Pillars: connect, communicate and conduct.

For people to connect, Wi-Fi is crucial in hotels and in other locations, and should now be seen as an essential service, Vaughn said. “If you have connectivity in your venue, it allows those visitors, those fans to connect from their seat and to become potential marketers”. 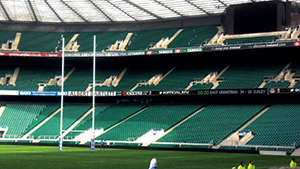 And when visitors use different social media channels, such as Facebook and Twitter, venues can utilise this communication for their brand to promote it.

In terms of making payments, Vaughn stressed the benefits of changing to contactless. At Twickenham Stadium, they look at how people pay in venues to analyse how they could improve payment efficiency and costs. Impressively, although Twickenham is an old stadium, it is now fully contactless, and is the first venue in the world to be so.

At Twickenham, they use technology to gain live information for avoiding queues by driving people to different levels using their Internet Protocol television. By connecting every till to a back-end system in real time, they know the source of all the sales, and these live analytics lead to improved operations, Vaughn explained.

Examples of other ways to bring in technology and new markets to the venue range from E-sports, such as video games, to drone racing to offering virtual dimension tickets for watching booked-out events at home.

“Whether we like it or not, technology is driving change. It’s moving at such a pace now that it’s likely to move faster than we can evolve with it. The general experience that people have in the venue has to mirror what is going on outside in everyday life. We are one of the last sectors to embrace that fully”, Vaughn added.

Future Challenges
Following a tea and coffee break, the speakers went back to the stage for a panel discussion. Regarding what challenges Japan might face, Vaughn pointed out that, in the UK, venues are increasingly being managed by third parties. This means that investment in venues is easier than if they were fully managed in a public sector environment. “For Japan, I think the challenge is how can you form partnerships and how can you build a local economy to support those parties and get a return when more people enter the market.”

Both speakers also highlighted that Japan should consider how it will make a legitimate career for people in the events and venue sector.

“I think one of the challenges for Japan is that the events and venue sector is not seen as a strong career path and, perhaps, that part of the service sector is not elevated yet to being something that will draw the best talent—but also something people would aspire to be involved in. If that changes, it builds capability”, Vaughn said.

Reflecting
When asked by BCCJ ACUMEN about his thoughts on the forum, Young only had encouraging words. “I thought it was really successful. I think the feedback from the audience was positive. The questions were intelligent and really applied to the context for Japan. The audience know that there are challenges here—it sounds as if they’re really facing up to that. So I thought it went well”.

Regarding his impressions of Japanese sports facility management, Young praised the forum organisers and attendees. “My first impressions are that, having set up a forum, to have so many people attend [was wonderful]. And I sense it’s not always usual for Japanese people to ask loads of questions—and yet we had lots of questions. That’s really positive”.

The UK can support Japan in terms of management capability, said Young. To work together effectively there needs to be an open, transparent relationship where the Japanese firms are confident that their British counter­parts are there to share information, to do so in a contractual way which makes it fair for both parties. “A lot of intellectual property needs to be shared for Japan to be effective in delivering the world cup and the Olympics and future events.”

Vaughn was equally as optimistic about the forum as Young, and believes that there is a huge appetite for change in the Japanese events industry. “I see a lot of similarities to where the UK was, perhaps 20 years ago, and it’s evolved very quickly. The benefit that Japan has, certainly from a technology perspective, is that technology now is developing so much faster that it may not take that long—if there is an appetite—for them to actually come up to speed”.