Standing by her mantra that “normal people tell the best stories”, Layla McCay, founder of the Perfect Liars Club, should know. Having perfected a sell-out show in which lies, deception and invention are positively encouraged and the suspension of disbelief is a fool’s errand, we discussed the creative scene in Tokyo and the comedy show’s winning formula.

Invented on a whim based on fond memories of a childhood game, the event’s success lies in its simplicity: four storytellers regale the audience, who then quiz them in an effort to root out the liar, all before the grand revelation. While it seems simple enough, years of practice have helped McCay streamline the show, with little twists and charms that add to the intrigue, while keeping it firmly structured.

Most vital, of course, is the knack for picking great storytellers and great stories.

“If you’re the sort of person who would tell funny stories round the dinner table then you’re going to be all set for Perfect Liar’s Club”, McCay explained. And in terms of stories? “You need to catch that fine balance between interesting and crazy, but not so crazy that it’s obviously a lie, and not so boring that people stop listening”.

Luckily, she has the storytelling down to a fine art, and with a little revision and coaching, so do the performers. However, “whilst it’s really fun listening to the stories in the Perfect Liars Club, the interrogation is still the best bit. It’s set up in such a way that they always get laughs”.

Key to the process, the interrogation depends on the audience, and there were some initial concerns about bringing the show to Tokyo, where it now takes place at the Good Heavens pub in the Shimokitazawa district.

“I was worried people wouldn’t ask questions and would be a bit shy, but I was surprised—the Tokyo crowd really get involved and ask some very shrewd questions”. 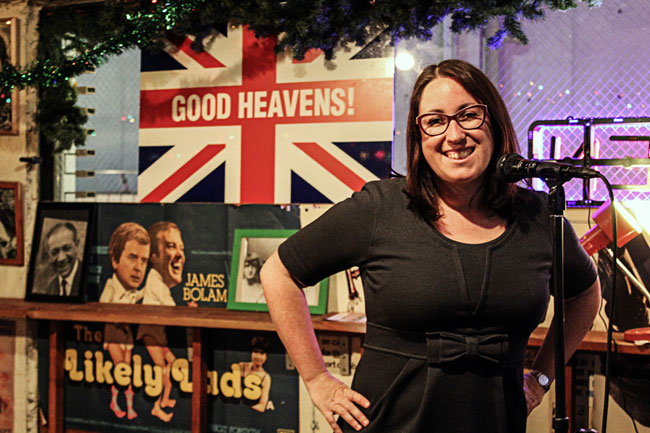 Global origins
Started in Washington, DC, in 2013, the Perfect Liars Club was an instant sell-out success.

“Tickets once sold out in 90 seconds. That was our glory moment; we felt like rock stars. It started to get really crazy: people were getting their grandmothers to wait for the release online. There were lots of ticket strategies”.

They moved to a bigger location and then took the show to the Capital Fringe Festival in 2014 and again in 2016. But, as McCay noted, “although that was a bigger venue and it was really successful, I think it’s the sort of thing that works best in a bar, with people chatting and people scheming together rather than sitting separated in theatre seats. [For] the sort of show this is, a certain intimacy is quite important”.

With many audience members working in politics and with probing questions part of their everyday work, it’s no surprise the show was a hit in Washington, DC. But Tokyo was seen as a risk.

“In Washington I was tapping into this big established storytelling scene where people knew what to expect, whereas here it was a matter of introducing the format and hoping it worked”.

Following the success of the opening night, however, any fears were soon forgotten.

“At that first show, where the liar was caught and everyone was screaming, I felt like I was in DC. But also it felt like this was a show that would work anywhere, because it just taps into human nature”.

This was by no means a leap into the dark, however. There was a strategy, and integrating into the Tokyo scene was key. To that end, McCay had a plan: her trademark newsletter and, most important, friendliness.

“I spent six months going to all the shows and making friends with everyone because I like being able to talk about other people’s events and trying to build the audience together”.

Never a bystander, McCay soon joined in, performing in both English- and Japanese-language stand-up comedies, as well as writing A Brit About Town, a listings blog for spoken word and creative nights in Tokyo. The blog proved to be a great help, as it had in Washington.

“Everybody loved this blog back in DC, and even more so in Tokyo, where it can be hard to find interesting events on in the evenings, particularly if your Japanese isn’t great. So it helps build the audience, not just for Perfect Liars Club, but for all the other great things that are happening across the city. Also, the other shows like that, I advertise them and attend their events, so they often reciprocate—it’s helped build a nice community”.

Her combined efforts have meant that, rather than appearing from nowhere, the first Perfect Liars Club was already long awaited, and performers from established local shows such as Improvazilla and Stand-Up Tokyo have already taken to the stage with their stories.

Alongside familiar local faces, there have also been some special guests, including the director of Billy Elliot Japan, Simon Pollard, and the apparently adept liar, Tim Hitchens CMG LVO, then-UK Ambassador to Japan.

“My personal highlight was getting the British ambassador to perform. He was just about to leave Tokyo, so he was looking for fun things to do and he thought this was a hilarious idea—he insisted on being the liar!”

Beguiling the audience with a tale of penguins murdered in the name of the Queen on a distant press trip, the ambassador fielded questions with alarming skill and was eventually crowned a perfect liar, much to the astonishment of the crowd. 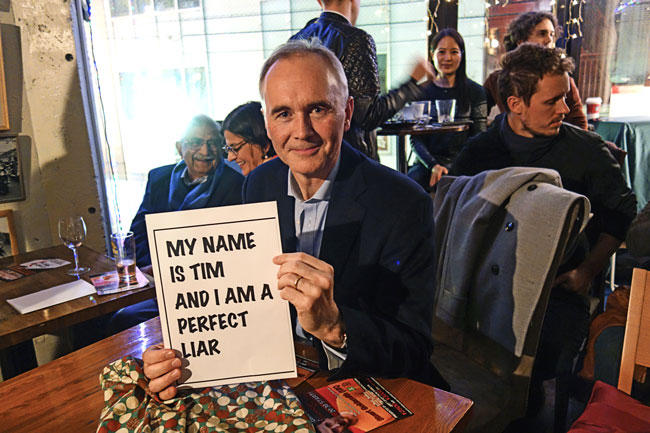 Hitchens successfully fooled the audience with his tale.

Fostering a successful English-language creative scene is a priority for McCay.

“As the wife of a British diplomat, we have moved from place to place, but it’s really important to me to not just be a visitor, or someone passing through—as long as I’m here I want to feel part of the city”.

By focusing on encouraging a culture of English-language accessible events, she hopes to help Tokyo develop a strong and open international arts scene that caters to diverse tastes and attracts the somewhat elusive expat community, as well as Japanese people.

“When you look at big cosmopolitan cities around the world, many of them having thriving English-language arts scenes, and Tokyo really is quite Japanese focused”, said McCay. “Obviously we’re in Japan, but it doesn’t need to be like that—we can have both [languages in the arts scene]”.

Having already tested the waters with Japanese comedy, there are some plans to develop this further.

“I hope one day to do Perfect Liars Club in Japanese. Not regularly, but as an occasional thing”.

With the seemingly unstoppable Perfect Liars Club plan in place, it is certainly a space to watch.