My father was a big fan of British motorcycles and had a leaky and rattly old BSA 500cc single-cylinder machine and a silver pudding basin crash helmet. When my brother and I were children, he used to take us for rides along a winding country lane in our Norfolk village.

It was a noisy bike and one Sunday evening a large, grumpy gentleman in a sweat-stained vest came out of his house, waved us down and said something like, “I’m trying to get my kids to sleep. Ain’t you got nothing better to do than ride up and down all night making a racket!?”

I was puzzled: what could be better than that?

When I was old enough to get a bike of my own there were no thoughts in my mind whatsoever about buying British. In those days you could ride a 250cc bike on a provisional licence, which is to say, as a 17-year-old without having passed a test of any kind. 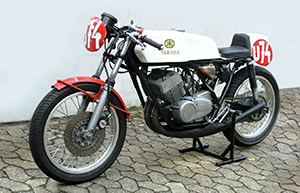 I know I wasn’t the only teenager who worked all through the summer of his 16th year and bought himself a 90mph-plus Japanese bike for his 17th birthday.

Then Yamaha brought out the 100mph (the magic “ton” in motorcycle parlance) RD250 liquid-cooled two-stroke. It was too much for the lawmakers in Whitehall, who promptly lowered the provisional licence limit to 125cc, incidentally condemning me to a sobering-up period on a Honda C90 Cub while I slowed down enough to get through the test.

Decline
Domestic production of British bikes peaked at 187,000 in 1954 using a labour-intensive manufacturing process which, by the 1970s, still enabled production of a mere 15 bikes per employee per year. Meanwhile, in Japan and Germany, the decision had been made to invest heavily in the latest equipment and technology leading to breakthroughs which, in the same decade, allowed the likes of Honda to produce 100–200 bikes a year for each employee.

By the late 1950s, around the time my father became old enough to have a bike of his own, Honda’s total output was larger than that of all the British manufacturers combined.

One reason the British found it hard to compete was the huge domestic market in Japan which gave Honda et al the means with which to expand abroad. However, this could as easily have been an excuse for them to rest on their laurels. And, indeed, in the 1960s some in the Honda organisation thought it was madness to try to sell motorcycles to a previously dominant Britain and car-obsessed America.

Instead, Honda chose to continue to innovate and expand, and developed the practice of spending 3% of gross revenue on research and development. In 1960, they opened their first R&D facility, about which British makers were deeply sceptical, and which they emulated only much later in the decade—when it was already too late.

Contrary to the popular stereotype, it was not slavish copying that led to the domination of the big four Japanese manufacturers (Honda, Yamaha, Suzuki, Kawasaki), but big dreaming, virtually superhuman determination and single-mindedness harnessed to adaptability, and seemingly divinely endowed engineering skills.

The man who embodied these world-beating qualities was Soichiro Honda. Again, contrary to the stereotype, Honda was a fiercely independent Tokyo man, who had little time for formal education and the effrontery and drive to personally berate the Minister of International Trade and Industry (MITI, now METI) before building a car in record time and getting it into the Tokyo motor show in 1962.

Honda started Honda Motor Co. in 1948, the same way that, in 1902, Siegfried Bettmann—a German émigré living in Birmingham—started what was to become Triumph Motor Company, by making motorised bicycles.

Both firms attracted the best engineers, who quickly learned to make high-quality, high-performance motorcycles that embodied innovative technology and were attractive to the consumers of their day.

By the time Honda retired in 1973, his firm had reached the landmark of 20mn bikes produced and had changed the motorcycle world forever with the introduction of the 67 horsepower, 123mph four-cylinder CB750 which sold for the almost unthinkably low price of $1,495 in the US.

By contrast, in Britain, 1973 saw the dissolution of the deeply indebted major British industrial combine, the BSA Group. Founded in 1861, it now abandoned its final attempt to build a world beater, after the firm’s accountants concluded that it would sell for double the cost of the equivalent Honda in the United States.

Triumph struggled on for another decade with the support of Harold Wilson’s Labour government and the left-leaning Minister of Trade and Industry Tony Benn. This led to the famous Meriden worker’s cooperative, which finally threw in the towel in 1983. 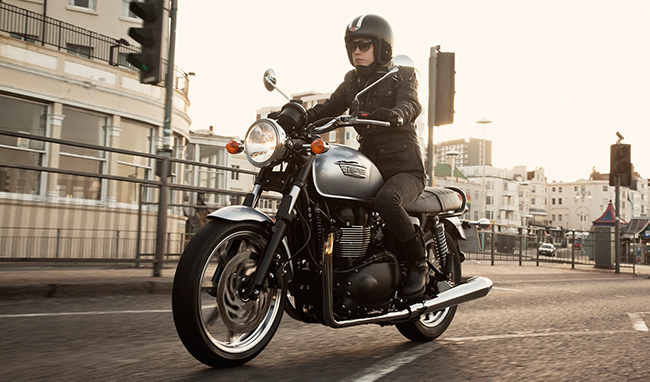 The British Fight Back
When the Meriden co-op went into receivership, two men stepped into the breach. The first was millionaire real estate developer John Bloor, who bought the Triumph name and patents—wisely taking his time to watch and learn, including several trips to Japan, before opening a new Triumph factory in Hinckley, Leicestershire in 1991.

The second was Les Harris, an enthusiast from Devon who bought the leftover parts and supplies and purchased a five-year licence from Bloor to produce Triumph Bonnevilles. He built a remarkable 1,255 machines, thereby ensuring the continuity that allows Triumph to claim the title of the world’s longest continually-operating manufacturer of motorcycles.

The new Hinckley Triumphs were just that—modern, liquid-cooled, mostly three cylinder machines that bore little resemblance to their predecessors in looks, reliability and performance. And they have proved amazingly popular: 63,400 bikes were sold in 2016, not only in Britain (where Triumph has a 16% share of the lucrative big bike market), but in more than 30 international markets. These include Japan and Thailand, where Bloor has built fully British-owned factories that supply parts and also assemble complete bikes.

A big test for the new company came in 2002 when a large part of the Hinckley factory was destroyed by fire. Out of the soul-searching that followed, and with the help of Danish-born branding expert Tue Mantoni, Triumph made the decision to build a niche that would differentiate them from the Japanese and give them an edge when the growing threat from Chinese makers inevitably crystallises in the near future.

Brits on Bikes
Last autumn, a wine-fuelled conversation with a fellow Brit who shares my love of both motorcycles and golf led to the idea of a trip around Japan riding from one golf course to the next, sending the clubs ahead by door-to-door parcel delivery and exploring along the way.

A series of happy coincidences then led to Paddock Motorcycles in Okayama offering to lend us two bikes for the journey. Their suggestion was two imported Triumph Tiger 800cc machines. If that’s not ironic I don’t know what is. But one thing’s for sure: with the new Tiger motor being smooth running and gentle on the ears we won’t have to worry about dealing with irate parents who can’t get their children to sleep. 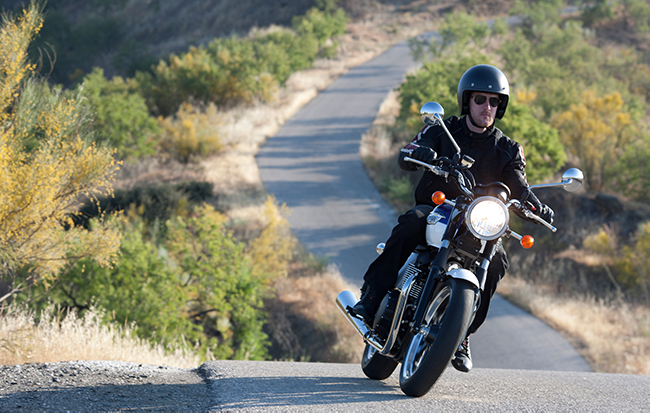