Myanmar is where India and China meet, and its history makes it the last frontier for development in South-East Asia. A group of McGill MBA students visited this fascinating country in summer, and were immediately struck by the people’s kindness and gentle nature, and the potential that the country possesses. 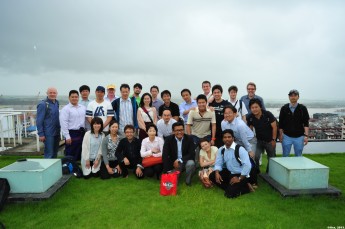 McGill students were overwhelmed by the generosity of the people in Myanmar.

The Myanmar of 2013 is a country that, in some ways, is frozen in time. Over the past 50 years, the people of Myanmar have lived under a series of military and socialist governments.

During this time, living standards failed to rise at the same pace as in the rest of South-East Asia. Myanmar, once the breadbasket of the region, was left the poorest country in the area.

The past five decades have seen minimal infrastructure investment, a decline in the English-language capability of the population, and misadventure in cross-border energy agreements. These developments have left the government and people of Myanmar with some very tough challenges to overcome.

The lifting of sanctions by the US two years ago opened up Myanmar to a wave of interest from Western countries and Japan. Some very basic statistics point to huge contrasts within the country: only about 16% of Myanmar’s 58 million people have access to electricity; yet, the literacy rate is 98%. The real story is nuanced, frustrating and inspiring.

In July, McGill MBA Japan programme students—led by Professor Alfred Jaeger and the programme director, Philip O’Neill—undertook a study tour to Myanmar. This marked the first such visit made by a major Western university since the lifting of sanctions.

A large proportion of Myanmar’s population practises Buddhism, which is a dominant theme in the behaviour of the people: calmness, gentleness, self-confidence and openness to strangers, among other traits. The capital, Yangon, is reputed to be safer than Tokyo and our experience confirmed this.

Our tour included visits to Japanese and local companies, meetings with foreign diplomats, and a visit to the Myanmar Chamber of Commerce and Industry. We also had the chance to visit the Myanmar Union Parliament, the Hluttaw, where we witnessed a session and spoke with several parliamentary leaders.

The government of Myanmar, in its purpose-built capital of Neypitaw, is working hard to pass at least 400 laws that are necessary to make the country a functioning democracy again.

For Myanmar to be able to effect meaningful changes a lot of courage will be required on the part of investors. A number of special industrial zones have been started along the coast to attract investment, but there are issues.

The power supply is not constant, while questions surround intellectual property rights, copyrights and investment law. Banking transactions, meanwhile, are all on a cash basis.

I am hoping that our trip will not be regarded as a dreaded 4L adventure, namely, one that enabled us to merely look, listen, learn and then leave.

Given the optimism and capabilities of the people in Myanmar, and the very long road to development, I believe there will be outstanding opportunities for investment in, and trade with the country.