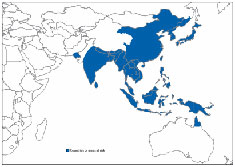 Countries and areas at risk for Japanese encephalitis

Who needs to be immunised against Japanese encephalitis

Between 1993 and 1995, I spent two years in Japan teaching English. Before moving, I dutifully went to see my general practitioner in the UK to ask about travel vaccines.

The news was mostly good; for many infections that were and still are endemic in the rest of Asia—such as hepatitis—Japan was listed as “low risk” and vaccines were not required.

However, when the nurse who was advising me reached the section on Japanese encephalitis, she looked a little uncertain and read it out to me: “Vaccination only required for those living close to both rice and pig farms”.

We decided that I could skip the shot. Shortly thereafter, I was installed in my apartment on the edge of a small town in Yamagata Prefecture, surrounded by rice paddies.

Just after moving, the nurse’s travel advice came flooding back to me when, on taking a walk in my neighbourhood, I discovered that some low-rise sheds visible from my kitchen window in fact belonged to a pig farm. This gave rise to some anxiety as to whether I had made the right choice in not getting vaccinated.

As a doctor now practicing in Japan, I am frequently asked about Japanese encephalitis. Concerned parents usually come by after receiving a request for their children to be immunised on the Japanese vaccination schedule. For pre-school children, this includes three shots, the cost of which is covered by the ward office.

Typically I’m asked whether this is a necessary vaccine and what are the chances that a child or adult will get infected while living here. Few foreigners who have moved to Japan have been vaccinated, as most travel health services regard the country as a low-risk area for the disease.

It turns out that I need not have worried back in 1993. Japanese encephalitis is extremely rare in the Tohoku region and non-existent further north in Hokkaido. Only rare, sporadic cases—with a higher frequency in the southern and western parts of Japan—are reported.

The disease is largely seen in rural areas, as it is a virus spread from animals (mostly pigs and wading birds) to humans by mosquitoes. This means it often crops up during the rainy season in the summertime.

It is very rarely reported in cities, even in other Asian countries, where the virus is still a significant health concern.

In Tokyo, the last fatality was reported in 1969 and no infections have been recorded since 1990.

The majority of people who contract this virus experience only a mild fever or no symptoms at all. However, for reasons not yet understood, a small minority of people who are infected develop severe encephalitis, or infection of the brain, which is fatal in up to 20% of cases and causes permanent neurological damage in up to a third of survivors.

At present there is no treatment other than supportive care in hospital.

So, taking all of this into account, I would recommend that anyone who is going to live or spend an extended period of time in rural Japan be vaccinated, particularly for areas west and south of Tokyo.

This applies to entire families, not just children who are invited to have the routine vaccine offered by the Japanese government.

Although named Japanese encephalitis, because it was first isolated in Japan in 1935, this form of the condition is much more common in parts of Asia outside Japan.

This means that those Japan residents who frequently travel in the region may also need to be immunised. However, for anyone living exclusively in Tokyo for a brief period and travelling only sporadically, the risk of infection is so small that vaccination isn’t required.