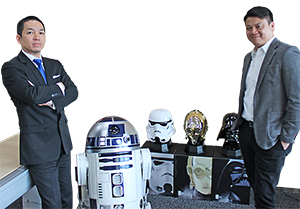 Two years may be relatively short in big business but, in that time, Yoshiaki Ito has carried out a successful relaunch of a business. On becoming president and chief executive of an ailing consumer electronics firm in February 2014, Ito set about turning it around by drawing on his wealth of experience as a change agent for brands including Sony, Coca Cola, Adidas and Dell.

Top of his proprieties was recruiting, as chief marketing officer, Alan Ng, a branding expert—and long-term friend—who has worked in the United States and across Asia.

Together, they turned the firm into a profitable business after it had spent 15 years in the red. But Ito believes there is still a long way to go.

“I would call ourselves a zombie”, he said. “Yes, we are becoming alive. We have stopped the bleeding. But we still need to bring the patient back”.

Central to this process, according to Ito and Ng, is the recent rebranding of the firm as AQUA Co., Ltd.

“With white goods, people buy because they need to, not because they want to; then they come back and buy the product every 15 to 20 years”, said Ito. “We thought, ‘What if we change this paradigm? We have to do something to attract attention’”.

The answer came in the form of the much loved and well-known Star Wars character R2-D2.

A fan of both the story and watching films at home, Ito considered a gap in the market: a fridge that brings drinks to you rather than you going to the fridge. According to Ito, no one is better than R2-D2 to play that role: “It’s something you have been dreaming of since you were a kid”.

Having had experience in the film industry, the pair were well placed to secure the licence agreements necessary to make those dreams a reality. And no time or expense were spared to ensure the product is identical to the droid.

The moving R2-D2™ Moving Refrigerator began being made to order in October 2015, and instantly drew attention; media covered the new product in 26 languages. The appeal of the product appears to be its authenticity.

“We know that the back side [of R2-D2 in the films] is pretty lousy. They just shoot the part viewers can see”, said Ito.

The team at Aqua therefore watched the films numerous times to create 3D data of the droid, ensuring nothing was missed.

“I approved the paint”, said Ito. “I had to change providers a few times to find the right paint—so it could be at the high level we wanted”.

“The sounds are also the actual sounds of R2-D2”, added Ng.

The fridge—which moves by remote control and includes a projector function—is not the only Star Wars-related product that Aqua has brought to market. In December, their product Cooling Mask: Darth Vader was launched, followed by C-3PO and a Storm Trooper in January.

“Being somewhat different makes us unique; it makes us interesting to consumers and retailers”, said Ng. “That is quite important to a very competitive market like Japan”.

And these novelty items are only the beginning according to the pair.

“We are pushing our engineers to think differently from before”, said Ito. “We are the company that is really crashing through the boundary between white goods and brown goods. Most white goods are just a commodity. Instead, we are making products that people want”.

“There are still a lot of entrepreneurial spirit and opportunities in Japan”, said Ng. “Our company is bringing optimism back”.