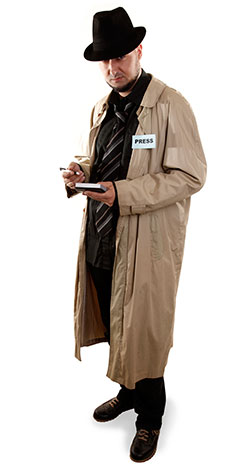 What does it mean to be a writer? I confess this is not something I’ve given much thought to but, over lunch the other day, an interviewer put the question: “So what kind of writer are you?” It is hard to find an answer.

For much of my professional life, writing has been a key part. As a BBC producer and presenter, I wrote the greater part of the programme content for which I was responsible—including promotional materials—and that continued through my secondment to NHK, the Japan Broadcasting Corporation.

Thereafter, as a creative director, writing was a part of my daily tasks, which continued as I moved into the executive directorship of the British Chamber of Commerce in Japan. Still now, at TELL, the telephone and face-to-face counselling service, writing is part of my work.

I have published works of short fiction and a book, The Business Travellers’ Directory to Japan, but does that make me an author? I review books, interview people, write features and write a regular opinion piece.

I suppose that means I am, at the end of the day, a journalist. But that is a tag I have tended to avoid. I wasn’t brought up on Fleet Street and I certainly never earned my stripes in the provincial press. To this day I do not hold a membership of the Foreign Correspondents’ Club of Japan.

It is not that I do not respect journalism as a profession per se. At its best, it can be inspiring. I think of prominent British journalist James Cameron—in whose memory an annual memorial lecture is given—and novelist, columnist and writer, Keith Waterhouse, for example.

Both alike in talent (and yes, dignity), but as different as chalk and cheese when it comes to focus and intent. These are giants I could aspire to stand beside and I like to think that over the years I have learned something of what passes for my craft from each of them.

This question was brought into sharp focus a matter of weeks ago, when the actor and comedian Robin Williams was reported to have been found dead, apparently by his own hand. This was, of course, a major media magnet. But, what was alarming was the way in which the death was reported.

As mentioned on page 44, the World Health Organization (WHO) has issued very clear guidelines on how suicides should be covered in the media.

Research has conclusively shown that suicides by celebrities often prompt others to attempt to kill themselves, and the way in which such deaths are reported can have a significant effect: both positive and negative.

Famously, when Marilyn Monroe took her own life, the number of suicides in the US spiked: a total of 200 more than the average number in August. Closer to home, a similar situation occurred in 1986 when Japanese pop singer Yukiko Okada jumped from a building in Yotsuya, Tokyo, resulting in her death.

Japanese media have been alerted to the WHO guidelines, with representatives of the major media outlets invited to the workshops that the organisation provided. Yet, in reporting the death of Williams—as with that of so many others—the guidelines were largely ignored.

By contrast, the UK media—aside from some of the more sensationalist organs—were by and large in line with the WHO recommendations. But, even so, as with so many newspapers all over the world, so little attention was paid to the people left behind, people so much at risk. Who, in the media fray, cared about them?

Bereavement of any kind deals a harsh blow to those closest to the deceased; a suicide makes the loss even harder to deal with, for often those left behind are plagued by guilt, wondering if they could have done anything to prevent the death.

Journalists play an important role in society. At their best they help to keep us honest. They hold a mirror up to nature. But they must also hold themselves responsible for what they do and how they do it.