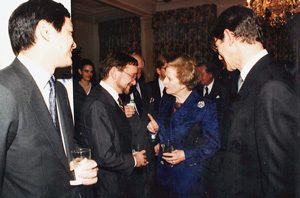 UK Prime Minister Theresa May’s recent visit to Japan was somewhat overshadowed by the firing of a North Korean missile over the Japanese island of Hokkaido the day before she arrived with a delegation of business and government leaders. The main focus of the visit was intended to be trade and investment, with Mrs May seeking to reassure Japan that the UK will remain an open and willing partner after Brexit. Her visit is the latest in a long series of prime ministerial missions to this country.

One of the most talked about is that of Margaret Thatcher in 1982. The Japanese Prime Minister at the time, Zenko Suzuki, was seen both at home and in the UK as a lightweight, but that didn’t stop Thatcher from tackling corporate Japan for all she was worth. It’s widely believed that it was this visit that helped persuade Honda Motor Co., Ltd. and Nissan Motor Co., LTD. to agree to use the UK as their European investment base.

Thatcher made several other visits over the years and became a highly respected figure in Japan. Shortly after the 1982 visit, there was a change of premiership in Japan and Yasuhiro Nakasone came to power. There was an immediate rapport between the two leaders.

In her memoirs The Downing Street Years, Thatcher wrote: “Under Prime Minister Nakasone, Japan began to play a more active role in international affairs. So, when he made a visit to Britain in June 1984, I felt I was dealing with a Japanese leader who understood and sympathised with Western values and had shown that he was prepared to make steps in the right direction on economic policy”.

Thatcher also visited Japan after she had stepped down from her role as prime minister, and she was the object of much admiration in Japan’s corporate world. I clearly remember a very lavish black tie dinner at the Imperial Hotel in Tokyo to which I was invited (years before I was hand-bagged at a chamber breakfast in 1993 after the event did not go exactly to plan!). Each of the guests was presented with an autographed photograph in a splendid Mappin and Webb silver frame.

New era
Prime Minister John Major led a 12-member trade delegation to Japan in the early ’90s. His was the first visit to the newly installed coalition government of Prime Minister Morihiro Hosokawa.

Tony Blair’s visit later in the decade was an altogether higher profile affair, attracting a good deal of media attention. One of the highlights, and of particular significance to the British Chamber of Commerce in Japan (BCCJ), was the official opening of the British Industry Centre (BIC) in the Yokohama Business Park.

This initiative, run by the UK government, Nomura Real Estate and the BCCJ sought to make it easier and cheaper for British firms to enter the Japanese market. Tony Blair performed the niceties in the presence of the British ambassador, the mayor of Yokohama and other dignitaries.

I was extremely nervous on the day as I was master of ceremonies and the event had to be conducted in English and Japanese. Blair—who appeared genuinely interested in the genesis of the BIC—was very reassuring. He complimented me on my Japanese presentation, but how he could judge it is anyone’s guess.

David Cameron continued the tradition of such visits in 2012, when he led a delegation to South-East Asia, beginning in Japan.

Making an impact
It is probably impossible to say, overall, how much such visits are worth to the UK economy. But there is no doubt that they play an important role in keeping the relationship between Britain and Japan the focus of attention.

As the UK moves ever closer to Brexit, the country needs to be sure of new free trade possibilities. Japan is an important trade partner and our countries’ leaders need to work closely to ensure that the relationship is maintained. Mrs May’s recent visit is a key step, and it follows in the path of several important prime ministers who have visited here before.