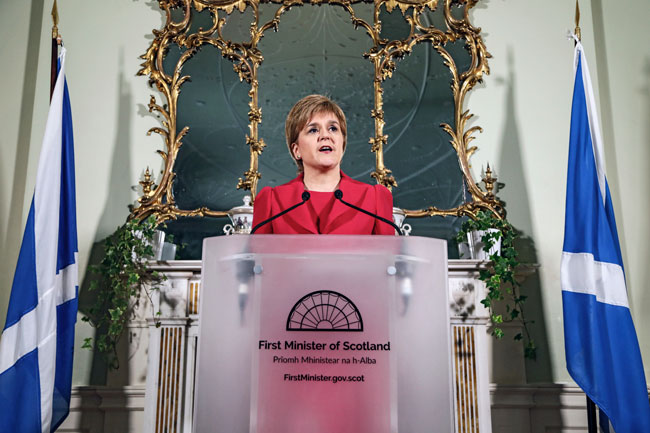 When Scotland went to the polls in 2014 in a referendum over independence, the belief was that it would be a once-in-a-lifetime event. With a majority of almost half a million voting to stay in the UK, the outcome was in no doubt. Who would have thought that, less than three years later, the issue would be back on the table?

Yet Nicola Sturgeon, first minister in the Scottish government and leader of the Scottish National Party (SNP), has announced in no uncertain terms that there will be a second referendum on Scottish independence in late 2018 or early 2019—a proposed timetable that British Prime Minister Theresa May has called the “worst possible timing”. A debate on triggering the process that was due to be held in late March was postponed following the terrorist attack at Westminster on 22 March, but Sturgeon has promised it will go ahead in due course.

Her reason for insisting that a second referendum is necessary is tied to the June 2016 referendum on whether the UK should remain in the European Union (EU). Fully 62% of Scots voted to stay, as opposed to 53% of the English who voted to leave. Thus, Sturgeon argues, there has been a “material change of circumstances” that justifies a new referendum.

However, the majority of people in Scotland simply don’t want one. There is no overwhelming evidence of an advantage to an independent Scotland. All the arguments against separation that were put forward in 2014 are still valid, and there is now one more.

Under the so-called “Barroso doctrine”, Brussels has ruled that if any part of an existing EU country becomes independent, it must reapply for membership, and that is a process that could take many years. Such an independent Scotland would be very much an outsider, especially as by leaving the UK it would also have to leave NATO. Here again, reapplying for membership is a possibility, but it could also take several years for the allies to give their approval.

Other things have changed, too, since the previous referendum. North Sea oil and gas prices have fallen steeply. One thing that hasn’t changed: Scotland today receives more in payments from London than it returns in taxes.

Despite all this, the SNP hardliners feel they have a better chance of winning the vote this time around. Sturgeon knows she has to win since a loss would put an end to her ambitions for a long time to come. On the other hand, May does not want to be seen as the prime minister who lost Scotland. Little wonder relations between Westminster and Edinburgh are frosty.

Meanwhile, May has her sights set on the aftermath of having triggered Article 50, the legal mechanism that started the EU “divorce” proceedings. True to Whitehall rumour, this happened on 29 March. One early step will be publishing detailed plans for restoring the UK Parliament’s sovereignty over areas hitherto covered by EU law.

These will include proposals for converting those EU laws into UK law and repealing the legislation that took Britain into the EU in the first place—the European Communities Act 1972. The process for converting EU law to UK law is seen as controversial because of provisions known as Henry VIII clauses. These give the government the power to change old laws by means of secondary legislation, which limits parliamentary debate.

Brexit Secretary David Davis has defended the plans, saying that, “to ensure continuity we will take a simple approach … That is what people voted for: power and authority residing once again with the sovereign institutions of our own country”.