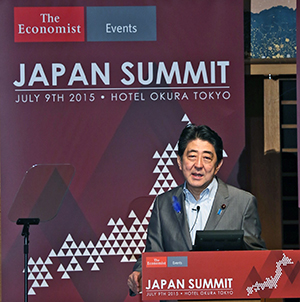 Prime Minister Shinzo Abe underlined the economic achievements of his administration over the past 12 months at The Economist’s Japan Summit 2015, pointing to buoyancy in the stock exchange, the decline in the unemployment rate and tax revenues climbing to a 21-year high.

Abe also expressed optimism that the budget deficit can be halved in the near future, explaining that more women are employed, productivity is undergoing “a revolution”, and the time is ripe for more foreign firms to set up shop in Japan.

He also took the opportunity to dismiss suggestions that his Abenomics policies have run out of steam—although analysts, who addressed the audience at the 9 July event after his keynote speech, were more measured in their assessments of progress to date. And some were scathing in their criticism of his pet economic policies.

Elements of Abenomics have come under the spotlight for failing to deliver so far, notably, the “third arrow” of meaningful structural reform. Yet Abe was bullish as he spoke at the event, held at the Hotel Okura Tokyo.

“At the end of last year, I called a snap election, asking the voters to endorse Abenomics”, he said. “One year ago, it was beyond my wildest imagination that such a thing would come to pass”.

Emphasising that his policies had “garnered a clear mandate from the voters, which was most helpful”, Abe expressed his determination to ensure that the third arrow hits its target.

“I will accelerate my growth strategy at an even greater pace”, he said. “I will all at once break through the regulations, systems and conventions that are like solid bedrock and have hindered Japan’s growth for many a year”.

He said that his administration is not preoccupied with the debate over national security and reiterated the improvements that can be seen in the Japanese economy since he addressed The Economist’s Japan Summit 2014, last April.

The earnings of firms listed on the Tokyo Stock Exchange have surpassed the ¥20trn (£107.2bn) level for the first time in history, Abe said. At the same time, the ratio of job offers to job seekers has hit a 23-year high, while Japanese corporations across the board raised wages by more than 2% at the start of the financial year.

The three-percentage point hike in the consumption tax rate in April 2014 caused “a dip” in the economy, Abe said, adding that this is in the past. Now, corporate profits are on the increase, and “those profits are getting cycled back into growth of jobs and wages.

“Call it a virtuous cycle of economy, which has finally been set in train”, he said, adding that the Japanese economy is at present growing at an annualised rate of 9%.

The government’s tax revenues for 2014 hit a 21-year high of ¥54trn (£289.1bn)—which exceeded the government’s own expectations by ¥4bn (£21.4bn)—and the 2015 budget includes measures designed to halve the nation’s primary deficit, he added.

“See?” Abe said. “Our economic policies have stopped providing a point of contention. Little wonder the opposition stopped debating Abenomics. The more they discuss it, the greater value they will have to admit in the improved numbers and figures”.

And he insisted that Abenomics is “picking up acceleration”.

Legislation to reform agriculture cooperatives has passed the lower house of the Diet and is being debated in the upper house; more than 2,000 publicly traded firms have adopted Japan’s Corporate Governance Code in the past two years, and the number of firms appointing independent non-executive directors roughly has doubled.

“A new mindset that has been embraced should encourage the people of Japan to look beyond their home country at the far wider world, and set sail vigorously into the rough waters of international competition”, he said. “That, fundamentally, sums up my own belief that is at the base of my growth strategy”.

Not everyone, however, was completely won over by Abe’s rosy picture of the state of the national economy.

“There were some very upbeat assurances there on the economy and structural changes, but my feeling is that the prime minister is somewhat on the back foot when it comes to the economy, as he focuses on the key issue of the security bills that are before the Diet”, said Andrew Staples, director, Economist Corporate Network, North Asia.

Ensuring the security legislation passes will inevitably use up some of Abe’s political capital, which he will still need to tap to ensure the success of Abenomics, Staples said. He added that citing increases in foreign direct investment into Japan as evidence of successful policies is somewhat disingenuous, because inbound investment starts at such a very low base. 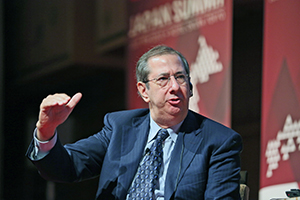 Richard Katz, editor-in-chief of The Oriental Economist Report, was even less impressed by Abe’s comments, singling out the annual target of 2% growth in annual GDP.

“Ninety-five percent of economists do not believe that the Bank of Japan will be able to achieve that 2% growth—and, even if they do so, I believe that Abenomics is broken and needs to be fixed”, he said.

Of Abe’s three arrows, only his policies to curb the strength of the yen can be classed as a complete success, Katz said, with the fiscal stimulus measures hampered by having “one foot on the accelerator at the same time as having one foot on the brake”.

Critically, none of the three arrows work without the other two being effective, and the failure of Abenomics can be seen in the fact that GDP has not managed to recover to levels seen before the global economic crisis of 2008, Katz said.

Asked what steps he would suggest to Tokyo to trigger real improvements in the economy, Katz identified three moves that would have an immediate impact.

Ensuring equal pay for equal work would encourage more women to return to the workforce and, at the same time, ensure that staff in temporary or non-contract positions earn a decent wage. That, in turn, would encourage consumption.

Second, he proposed abolishing the agricultural sector’s monopolistic control of the food and drink industry, and encouraging imports of cheaper food. Finally, he said, the regulations against maternity harassment that are currently generally ignored—despite being on the statute books—need to be enforced.