Japan has been spending plenty of time pondering the future course of its economy.

Most people in government, the corporate sector and academia agree that serious reforms will be key to achieving sustained growth in a society struggling with a rapidly ageing population. Where there’s disagreement concerns the specific changes needed and how far reaching they should be.

For instance, Seijiro Takeshita, professor at the School of Management and Information at the University of Shizuoka, isn’t impressed with what many hailed as a groundbreaker: Japan’s first corporate governance code.

Speaking at the The Economist’s Japan Summit: Future Works conference on October 21, Takeshita gave a personal analogy. His wife, he said, recently saw a suit in a catalogue that looked stunning, so she prodded her husband to go to a department store to try one on.

“But I looked like a clown”, he told the audience. “The body structure of what she saw in the catalogue and mine were totally different. “Governance”, he added, “is exactly the same”.

Takeshita was stressing the importance of being selective when it comes to reforms. Japan taking a “copycat” approach by adopting ideas originating elsewhere can be a bad idea. That’s because the country would be ill-advised to ditch or modify certain characteristics that have worked well for it. These include Japanese-style collectivism and the close relationships cultivated in contracting.

“These directly equate to our competitiveness. This is where we should really sustain our strength”, Takeshita said. 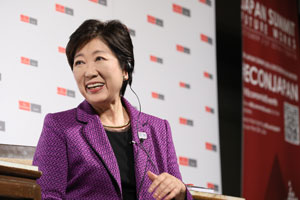 Beyond overtime
The theme of the one-day Japan Summit was “how policy, technology and global trends will change the workforce”. Bank of Japan Governor Haruhiko Kuroda and Yuriko Koike, governor of Tokyo, were among the speakers. The event’s timing was unintentionally significant; it came after news that work inspectors had ruled the suicide last year of 24-year-old Matsuri Takahashi as death from overwork, or karoshi. Takahashi was working at Dentsu Inc., Japan’s largest advertising agency.


The highly publicised case cut across some of the topics discussed at the event: women in the workforce and the common practice of employers expecting their workers to log excessively long hours.

“I think this is ridiculous. I think the management of the company should be fired”, said Fujiyo Ishiguro, president and chief executive officer of Netyear Group, drawing applause from the audience.

Fellow panellist Machiko Osawa, director of research at the Japan Women’s University’s Institute for Women and Careers, said, “I think Japanese corporations are still very inefficient in the way they [require overtime] for unnecessary tasks”.

Kaori Sasaki, founder and chief executive officer of ewoman, a think-tank and consultancy, called an initiative by Prime Minister Shinzo Abe to put more women in senior positions “a big step”. But, she added, changes to rules and regulations need to go well beyond the central government level—to the very offices where people work. 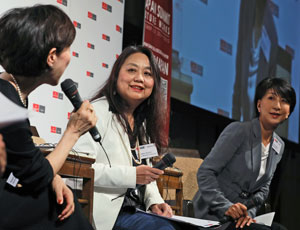 “Take child leave. [Men] know that once you take that leave, you won’t get a promotion”, Sasaki said. She suggested new kinds of incentives, such as giving automatic promotions to workers who take such leave. “Then, I think you’d see men taking leave”.

In her talk, Tokyo Governor Yuriko Koike covered a sweep of issues, from the environment to education. Still, she had the time to stress that the habit of putting in long hours at the office is out of step with today’s realities.

“I used the term ‘life–work’ balance instead of ‘work–life’ balance”, she said. “Working long hours means that people will not have enough time to improve their skills”.

Koike added that her administration is working on a “mechanism” to get departments inside local government to compete against each other to cut down on overtime.

“We want to make Tokyo a place where it’s easy to work”, the governor said.

The third arrow
The diverse proposals heard during the summit spanned from overhauling the socio-economic system down to simple points at the individual level.

Yoichiro Hirano brought up Tokyo’s summertime heat and oppressive humidity when he spoke about productivity. “Japan has long commutes, and this environment is bad, with packed trains … so when people get to the office, they’re very tired, lacking energy. That’s very bad for productivity”, said the Infoteria group chief executive officer.

The solution—especially during summer, when merely stepping outdoors can be an ordeal—is telecommuting, when the weather and other factors require it. People working in comfortable and familiar environments makes them far more productive, not to mention happier, Hirano believes.

Prime Minister Abe, who had spoken at previous Japan Summits, was unable to attend. However, an adviser to his cabinet and a keynote panel member, Tomohiko Taniguchi, addressed the audience on the topic, “Has the ‘Third Arrow’ Become Tangled in the Bow?”

Taniguchi raised the subject of the Trans-Pacific Partnership (TPP), one of today’s top economic issues. The ambitious trade deal seems to be in jeopardy in the United States, where the leading presidential candidates are coming out against it.

However, Taniguchi argued that whether the TPP flies or dies, it already has triggered “unprecedented” changes in Japan’s farming sector, as it braces for a possible surge of imports. Agriculture is often viewed as Japan’s biggest barrier in trade negotiations. 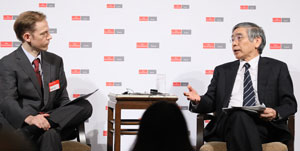 In one example, he pointed to the secondment of an official from the Ministry of Economy, Trade and Industry (METI) to a senior position in the agricultural ministry. Working directly under him are two other officials from his ministry.

“Some say the agricultural ministry has partially been under occupation by METI. The sector is the most important constituency for the ruling coalition parties”, said Taniguchi, explaining the significance of the current arrangement.

Taniguchi tried to convince the audience that “Abenomics”, the bold set of policies named after the prime minister, is continuing to make a big difference, despite its failure to hit a 2% inflation target and some other recent setbacks.

“I am saying to investors from abroad that … Abenomics is now playing a very, very long game”, Taniguchi said. “We’re talking about the birth rate, demography, changes in the style of work. And so you’ve got to play a very long game”.