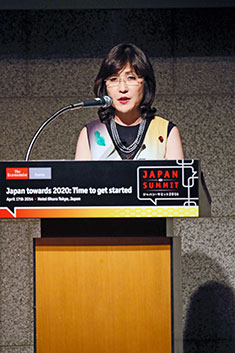 Prime Minister Shinzo Abe emphasised the twin issues of trade and security in his keynote address at the Japan Summit 2014, hosted by The Economist in mid-April.

And, while the immediate focus was on making headway in discussions on the Trans-Pacific Partnership (TPP) agreement, ahead of the state visit by US President Barack Obama, the Japanese leader went out of his way to underline the importance of a similar agreement with Europe.

“I am accelerating negotiations on economic partnership agreements, or EPAs, with our various partners around the world at an entirely different degree of speed than we did in years past”, Abe said.

Committing Japan to overcoming “mutual differences” with the US, he said the aim is to “forge a sturdy economic order for Asia and the Pacific in the 21st century”.

“We wish to create an unshakable foundation for growth. We will also make all-out efforts towards realising an EPA with the EU”, the prime minister added. “On the one hand, we have the TPP, and on the other we have the EPA between Japan and the EU. The realisation of these two agreements means the advent of a truly immense market.

“What will emerge is a free and open, as well as highly advanced and integrated market—a single, enormous growth engine that will benefit the entire globe and kick life into the economy”, he said.

The prime minister detailed a range of measures he is implementing to boost the domestic economy, including the introduction of corporate tax cuts, efforts to increase the representation of women in the workforce and making it easier for foreign workers to come to Japan.

“I think there is a lot of optimism in Japan right now”, Gerald Curtis, a professor at Columbia University, commented after Abe’s speech. “The country is getting out of deflation and Mr Abe has set a vision for the economy that is much more positive”.

There are caveats to this optimism, he agreed, including overcoming the bureaucracy and vested interests in a number of business sectors, and standing up to nay-sayers in Abe’s own Liberal Democratic Party.

“I hope he understands that he has to make some tough decisions and only then will we be able to see changes”, Curtis said. “His popularity and his ability to stay in office depend on his economic policies, so they have to work”.

A key to achieving better overall economic figures will be increasing exports in new sectors, primarily “soft power” products and services. This includes everything from film to cuisine, anime, computer games and “cosplay” (dressing up as characters from popular anime or film series), and it is in this opportunity area that Japan can take a leaf out of Britain’s book.

“I lived in Europe for a couple of decades and, going back many years, European countries have differentiated their brands and products based on their national identities rather than just on the product”, said Ken Okuyama, founder and managing director of Ken Okuyama Design.

“In Italy and the UK, for example, national culture is a big differentiator”, Okuyama said. “In Japan, we have never had to think like that because before there was no-one who was able to compete with our products and services.

“Now there are a lot of Asian countries that have similar products, but that cost less than half the price”, he added. “We have to learn how to use our national identity for the first time”.

Cool Japan
A good degree of the responsibility for exploiting this sector falls to Tomomi Inada, the minister tasked with carrying out regulatory and administrative reforms, as well as promoting “Cool Japan” and the Challenge Japan Initiative.

In her address to the conference, Inada—who, at the Tokyo International Conference on African Development in May 2013 had worn a Gothic Lolita-style outfit (emphasising dark makeup and Victorian fashion) to promote Cool Japan—said that there is also a need to alter corporate mindsets in Japan.

“We have to change the regulations that hinder the start up of new companies, but we must also construct an economy and society in which people can take on challenges without a fear of failure”, Inada said, pointing to her experiences in Silicon Valley, where the failure of a company is seen as a valuable learning experience.

“In Japan, we tend to be afraid of failure. Young people tend to be inward looking and want the stable life associated with working for a big company”, she added.

Inada also said Japan lacks the entrepreneurs needed to exploit the technology and know-how that exists and is being further developed here.

That thought was echoed by Takashi Mitachi, the managing director of Japan operations for the Boston Consulting Group, who suggested, “We need to see a cultural change”.

“During the bubble era, there were many who believed that anyone who stuck out in business would be punished by everyone else in society”, Mitachi said. “We have to learn to applaud and praise those who take risks”.

There is huge interest in many ideas for products and services that emerge from Japan; Inada cited as an example the enthusiasm seen overseas for heated toilet seats. She also said her ministry’s efforts are moving into a second phase of promoting Japan.

“Interest in Japan has never been as high as it is now”, she said. “And that is a legacy of the efforts of previous generations. We will have to add new things to Japanese traditional products to improve our brand power, to attract new eyes to Japan and to show ourselves to the rest of the world”.

One of the beauties of Japanese soft power is that it has numerous potential markets, Inada added.

“We do not have to decide on one sole market, as there is the potential to sell Japanese goods, ideas, images and so on anywhere”, she said. “We have not been trying to appeal to the outside world enough before now, so this is our opportunity”.

Summing up her impressions of the day’s discussions, Tamzin Booth, head of the Tokyo bureau of The Economist, said she had been struck by the “ambitiousness of the prime minister’s agenda”.

“That includes immigration, the overhaul of the Government Pension Investment Fund and the changing environment for entrepreneurs”, Booth said. “There seems to be an amazing commitment to getting things done and I find myself much more optimistic now”.