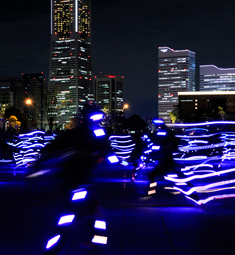 Illuminated against the autumn sky, artists in suits jogged, sprinted and cavorted through Yokohama’s streets and parks on 3 and 4 November, as part of the contribution by British artists to the Smart Illumination Yokohama Festival 2012.

First performed at the Edinburgh International Festival earlier in 2012, the Speed of Light designers were subsequently invited to attend the festival’s international debut at the annual Yokohama event, with the theme of sustainability and energy-saving technology.

The public art performance—brought to Japan by the British art charity NVA and the British Council—involved 50 people, wearing special suits fitted with LEDs, who ran in the dark to create patterned sequences of movement and living, moving art.

The participants started their show after dusk in the city’s Yamashita Park before proceeding to Zonohana Park, the Terrace Ferry Terminal and the Red Brick Warehouse shopping district.

“Running in a city allows you to get a perspective on, and find, your place within the surrounding topography”, said Angus Farquhar, creative director of NVA. “Even as a visitor the same can be true; when I travel to any city I haven’t visited before, I often run to an open vantage point to see where I am.

“Speed of Light is based on the interaction of intentional movement, light and sound over specific terrain”, Farquhar said. “It changes the way we see, and feel about, our environment—in this case, the visual qualities of Yokohama. It lets us look again at familiar perspectives of a city and appreciate where we live”.

Farquhar, who collaborated on the project with Japanese choreographer Makiko Izu, described Japan’s architecture as “a powerful mix of modern and historic, created through the necessity of rebuilding after physical disasters”. 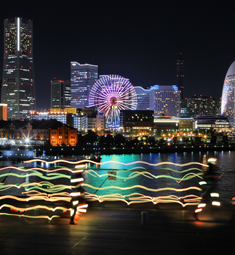 Although Yokohama is a teeming, often frenetic urban environment, the city still benefits from public space and good design precepts that have helped make life in the city function well.

Set up three years ago, NVA takes its name from the Latin term nacionale vitae activa, the 2,000-year-old Roman concept of being an active citizen and helping to construct the world in which we live by participating in how it develops.

A key tenet is to be involved in democracy rather than relying on the political class to implement change, Farquhar added. The NVA uses that same principle to make a special form of public art in which the collective actions of those taking part—in this case, runners—complete the work.

The light suits worn by the participants contained small battery packs, while remote wireless technology enabled the wearers to independently control the lights’ colours and intensity, as well as the speed at which they flickered, Farquhar explained, enabling the “narrative to change across the length of the run”.

“NVA’s landscape works have focused on how what you see changes as you move through a particular location”, he said. “Movement is seen as fundamental to how we order our perception of the world, thus the rhythm of movement becomes a source of creativity in itself.

“It demonstrates a way to collectively invest deeper into a sense of where we are and how that extends our understanding of the world”.

The British Council was delighted that NVA chose Yokohama for its first overseas performance of Speed of Light, fighting off competition from several other cities around the world.

“[The event’s] focus on innovative lighting technology as well as human movement and mass participation fits well in Japan, where new energy-saving technology and collective action—along with the recognition of the need for a creative response from the arts—are all features of the aftermath of the March 2011 Great East Japan Earthquake”, according to Manami Yuasa, head of arts at the British Council Japan.

“At the British Council in Japan, we are fond of saying how creative the UK is and how many opportunities there are for the development of partnerships using Japan’s very special creativity.

“Speed of Light is a very exciting example of this”, Yuasa added. “I’m sure that the blending of sport and art in this way will be very appealing for audiences here, and am thrilled that so many people at Smart Illumination Yokohama 2012 will be able to experience this wonderful collaboration between the UK and Japan”.