Beach, a slightly scruffy nine-year-old brown and white setter, could be forgiven for thinking that he has died and gone to dog heaven.

His owners’ home was destroyed in the Great East Japan Earthquake on 11 March 2011, and his future looked uncertain when local authorities in Tohoku decreed that pets were not welcome in the temporary housing units set up for evacuees.

But Beach was one of the lucky pets to find a new home—albeit temporary—with Animal Refuge Kansai (ARK). What’s more, as soon as his family has got back on its feet, Elizabeth Oliver MBE, founder of ARK, hopes he will be able to return to them.

“He’s a lovely dog and he really enjoys being able to go for his daily walks with our volunteers”, said 73-year-old Oliver, who has lived in Japan since 1968, and founded ARK in 1990.

“I’m confident he will go home one day as his owners have been to visit him here”, she added.

Sadly though, not all the animals that find their way to ARK have such caring and responsible owners. The sheer demand on the organisation means it has had to open a new branch, in the wooded hamlet of Shitsukawa Shimo Aza in Sasayama-shi, a 40-minute drive from its original headquarters in the village of Nose, Osaka Prefecture.

Oliver says she is fortunate to have such dedicated staff and caring supporters and donors, although the constant stream of abandoned and abused animals means ARK can always use more assistance. 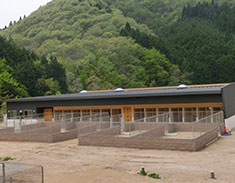 The state-of-the-art facility is located in a wooded hamlet.

The organisation purchased just over two hectares of land on a natural bend in the Shitsukawa River in 2010. The initial work involved clearing the land, levelling the areas to be built on, installing drainage and sewerage systems, and erecting fencing. The first building, as well as roads, a barbecue and picnic area, and a warehouse are already in place.


Tange Associates, the world-famous architect firm, donated its design services for the new sanctuary, including the first building—kennels for 29 dogs—which was officially opened with a party on 25 May.

UK pet organisations have also leant their support to ARK in the form of funding, support and advice, with the registered charity Dogs Trust, in particular, coming up trumps.

“They have given the yen equivalent of around £44,000 for the new kennel complex, along with plenty of advice from their own experiences”, Oliver said. “They were also quick to step forward with a donation of ¥5mn immediately after the Tohoku earthquake in 2011”.

That money has been used to fund designs for the kennels—and imports of special materials to build them—based on blueprints used by the Dogs Trust for its shelters across the UK. 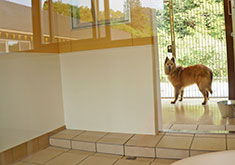 Dogs are housed in spacious enclosures

The high-quality materials required for a state-of-the-art Sasayama unit, including its interior glass doors and run gates, came from Syspal Ltd., a Shropshire-based firm that works with stainless steel equipment used in veterinary clinics across the UK.

Such was the concern over the construction of the kennels that specialist craftsmen who have worked for the Dogs Trust were brought to Japan just to ensure that all the components went together smoothly.

Dogs in the ¥90mn state-of-the-art facility are housed individually or in pairs in spacious enclosures with outdoor areas and under-floor heating. ARK’s team of volunteers also ensure that the animals get a good run in the spacious grounds every day.

“Dogs come to us for reasons that are very similar in the rest of the world”, said Oliver. “Changes in family situations are the biggest reasons; divorce, bankruptcy, an owner dies or is elderly and needs to go into a care home, and so on.

“The difference is that in other countries, such as the UK, there is a safety net and somewhere that will always take them in”, she added. “There are not many other places like us in Japan, so pets simply get thrown away or taken to the city authorities to be disposed of”.

Officially, local authorities across Japan put as many as 500 unwanted pets to sleep every day.

While that is an improvement on the some 3,000 that are believed to have been destroyed daily in the 1970s, Oliver believes the current true figure is far higher as pet shops and unscrupulous breeders simply kill surplus animals that are no longer young and, thus, appealing to buyers.

The next phase of the Sasayama sanctuary is the construction of a cattery that will be able to house around 100 cats, which make up the majority of the animals that ARK takes in every year. Advice has been forthcoming from Cats Protection and a host of other UK-based animal charities, with which Oliver and the ARK team have been building links.

“We have already taken in a litter of three kittens today”, Oliver said. “We get at least 10 calls a day about cats. Some of them are pets that have been dumped but many of them are semi-feral. We can’t take those in, but we have a policy of trapping, neutering and releasing them”.

Thought to be due to the limited space afforded in Japan, with small homes and gardens, cats are also frequently the target of abuse. They are often injured when they enter other properties or are deliberately poisoned.

Eventually, it is hoped the facility will have a clinic, a training and education building, a reception area and facilities for full-time staff.

While ARK tends to focus its efforts on dogs and cats, the charity has, on request, opened its doors to a host of other animals, including pigs, chickens, goats and ducks.

Last year, the year of the rabbit in the Chinese zodiac, the charity was inundated with unwanted rabbits, although it eventually found good homes for all of them.

Oliver has, however, had to turn down requests to take in penguins and a polar bear from a failing zoo. Despite this, she did help to find the animals safe new homes.

A visit to the ARK headquarters makes it clear just how critically important the new Sasayama centre is to the future of the organisation and the thousands of animals it helps. 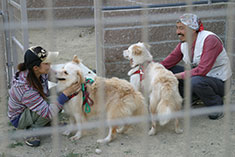 Dedicated staff interact with the animals.

In a wooded valley above the town of Nose, ARK has been forced to expand its kennels and cat cages up the stepped hillside. Space is at a premium for both animals and staff, and volunteers are busy caring for the newest arrivals.

Three kittens—one brown and white, the others ginger—who are so young their eyes have only just opened, are being cared for by a member of staff. She is using a pipette to feed one of the kittens, but it appears fidgety and unable to drink. Oliver says that at this age, the kittens will need to be fed every two hours throughout the night.

In the neighbouring quarantine facility, six fluffy Shiba Inu puppies are chasing their tails and leaping on their mother. The mother and entire litter had been discarded a couple of days earlier.

In one of the outdoor kennels, a dog named Wireless is hopping about agilely on three legs. The 5-year-old had been found by a local authority in Yamaguchi Prefecture with a wire. It had become so embedded in the shoulder of his front left leg that the wound had become infected and the leg had had to be amputated.

“There’s a tremendous need for the Sasayama facility, and I see tremendous potential at the site”, said Oliver. “It has already been a lot of hard work and there’s more to come, but we’re seeing real progress now. We just need to keep the momentum going”.

Named in honour of the CEO of Dogs Trust, who retired this year after serving 40 years at the charity, the special accolade recognises Oliver’s outstanding contribution to animal welfare outside the UK.

Gareth Thomas, head of international at Dogs Trust, said the organisation could think of no better person to receive the award.

“Elizabeth has dedicated her life to animals”, Thomas said. “The staff and volunteers at ARK work tirelessly to rescue and rehabilitate unwanted, abandoned and abused animals in order to find them permanent, safe and loving homes.

“This year, Elizabeth crowned her achievements by opening an incredible new rehoming centre that aims to rehome many more dogs, and save them from destruction”, he concluded.