1. Masters of ceremonies Madoka Kato and Guy Perryman.
2. The event featured British-themed cuisine.
3. A Land Rover was on display.
4. Volunteer Jane Best OBE played a key part in the event.
5. A Brompton bicycle was one of the evening’s keenly contested prizes.
6. Guests enjoyed a six-course meal with wine pairings.
7. Guests took part in a game of heads and tails to win the bicycle pictured.

Firmly established on the British Chamber of Commerce in Japan (BCCJ) calendar as a must-attend event, the evening attracted a record 274 bookings.

That figure made the 2014 BBA—sponsored by the Royal Bank of Scotland plc—the largest event in the 66-year history of the BCCJ.

The BCCJ also received 50 nominations for the six awards that were presented on the night.

This year’s gala was also memorable for the impromptu and energetic dancing that broke out as soon as UK band Stone Foundation struck up the first chord of their rock, soul and jazz-fusion set. Prominent among the dancers were Alison Jambert, former BCCJ president, and Ambassador to Japan Tim Hitchens CMG LVO and his wife, Sara.

Warm reception
Held at the Hilton Tokyo in Shinjuku on 14 November, the evening commenced with a Champagne reception.

Guests also sampled the London G&T Bar, provided by Whisk-e Limited and ably assisted by Fever-tree and Sipsmith. Ale drinkers were not disappointed, with BrewDog plc—fast becoming an institution in Roppongi—keeping up a steady flow of its Punk IPA.

A photo booth for award nominees was operated by Hasselblad Japan President WIlliam Penrice, and photographer Alfie Goodrich, who both also donated prizes.

Stone Foundation—also known as the UK’s best unsigned band—took to the stage for their first set as the doors to the ballroom were opened and guests began to take their seats.

Many were sidetracked, however, to admire the stunning Jaguar F-TYPE coupé and the Range Rover Evoque Prestige that acted as sleek-lined automotive magnets at the rear of the room.

Vibrant turnout
Guy Perryman and Madoka Kato, the voices of London Hit Radio on InterFM and joint masters of ceremonies, got the evening under way by introducing David Bickle, BCCJ president.

“This is a night to showcase and celebrate the success of the Japanese–British business relationships and the tremendous achievements of our individual and corporate award nominees over the past year”, he said. 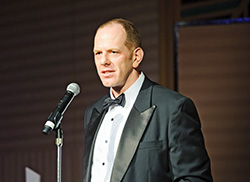 Bickle pointed out that the record turnout of members of the chamber and their guests “bodes well for the BCCJ and reflects the vibrancy of the contribution being made by British businesses in Japan”.

He expressed his gratitude to the British Embassy Tokyo, the BCCJ executive committee—who helped organise the event—and the “generous sponsors who have made the evening so special”.

Turning to the achievements and contributions by all the firms, organisations and individuals put forward for the prestigious awards, Bickle added that it is always worthwhile to reflect on the examples set by others as a source of inspiration.

Delving into events that fell on 14 November in years past, he explained that there are some worthy precedents of this innovation.

On the same day in 1922, for example, Bickle said that the BBC began domestic radio broadcasts from London. It was the start of a service “synonymous with trust and quality”.

The first official UK Singles Chart was also released on 14 November—in 1952. Further evidence of the tremendous creativity of Brits, the chart was the first of its kind in the world, and soon became a globally respected and popular phenomenon.

Finally, on that date in 1994, commercial Eurostar service began through the Channel Tunnel, linking London with Paris and Brussels.

“It was the culmination of a dream that had tantalised and inspired engineers for almost 200 years”, Bickle said. “It is synonymous now with determination to overcome seemingly impossible challenges”.

“So there you have it: Trust, quality, creativity and determination—values that I am sure will stand both Japanese and British businesses in great stead as they look to take advantage of the business opportunities of the future”, he concluded.

Taste of the UK
After the toast, the guests resumed their seats for a sumptuous British-themed six-course meal, accompanied by a selection of wines.

Dinner started with roasted pumpkin soup with baby scallops, garlic coriander butter and Melba toast. A duo of wild mushroom and onion tart and Scottish smoked salmon tartar was accompanied by a green salad with grain mustard dressing, followed by a sharp elderflower sorbet with a splash of gin.

The main course was a tender tournedo of Angus beef with sautéed green beans, truffle-mashed potatoes, Madeira sauce and Stilton crumb, followed by golden syrup sponge with warm vanilla custard. To complete the feast, coffee was served with Welsh cakes.

After the meal had settled and breath had been recaptured from the dancing, Hitchens was invited to the stage for the start of the awards ceremony.

BBA spotlight
Vying for this year’s awards, once again sculpted by Iwate Prefecture-based Scottish artist Kate Thomson, were firms and organisations from across the business spectrum. Nominees represented many sectors, from power and airlines to engineering and hospitality, a bakery and hotel to construction and shoemaking.

“I look forward to seeing what the future holds for tonight’s winners and all 50 nominees, and encourage others with ties to both countries to consider entering next year’s BBA”, Hitchens said.

He explained that the awards shine a light on the organisations and individuals that are forging new successes and partnerships between the UK and Japan.

The first award of the evening was a new category—New Market Entrant—introduced this year to recognise the most impressive newcomer. Rhino Rugby fought off competition from eight other firms to lift the trophy for its work to spread the game in Japan ahead of the 2019 Rugby World Cup.

The Community Contribution award went to Fermenstation Co., Ltd., which is working with the community of Oshu City, in Iwate Prefecture, to create a new business through manufacturing rice ethanol.

Elizabeth Handover then took the Entrepreneur of the Year award for her achievements with Lumina Learning Asia, while the fiercely contested UK–Japan Partnership award went to Telehouse International Corp. of Europe Ltd. with KDDI Corporation, for the development of data centres in the UK.

The Person of the Year award, determined by BCCJ members’ online votes, went to Sue Kinoshita, director of UK Trade & Investment Japan. A key driver of UK–Japan trade relations, she immediately dedicated the prize to her “brilliant team” at the British Embassy Tokyo and the British Consulate-General Osaka.

The final award of the evening was the most keenly anticipated and contested, with the British School in Tokyo emerging ahead of 11 other organisations to take the title of Company of the Year.

Accepting the award from Hitchens, Principal Brian Christian said 14 November would now be known as the day on which the school’s headmaster was lost for words.

The evening ended with guests playing a game of heads and tails to win a bicycle provided by UK–Japan Partnership award nominee Brompton Bicycle Ltd. and Mizutani Bicycle Co., Ltd., before the evening moved on to an after-party at the hotel’s Zatta lounge.

A number of firms also donated a selection of prizes for the raffle and goody bags.