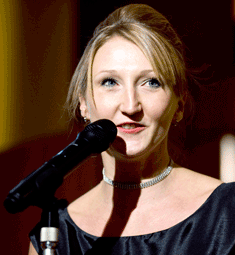 One of the biggest cheers of the evening was for BCCJ Executive Director Lori Henderson, who was instrumental in the success of the event.

The annual British Business Awards continue to go from strength to strength, with a record number of nominees vying for this year’s titles.


Fully 180 members of the British Chamber of Commerce in Japan and their guests attended the glittering prize-giving ceremony at the Conrad Tokyo hotel on 2 November.

GlaxoSmithKline K.K. walked away with the Company of the Year award, after fighting off stiff competition from some of the biggest names in British business operating in Japan.

The Social Responsibility title went to Lush Japan Co., Ltd., the Entrepreneur of the Year award was won by Price Global, while Yagi Tsusho Limited & Mackintosh Ltd were honoured in the UK–Japan Partnership category.

But the evening’s biggest round of applause was saved for the winner of the Person of the Year award.

Ambassador Sir David Warren KCMG dedicated the award to all those he had worked with at the British Embassy Tokyo since taking over the post in July 2008. 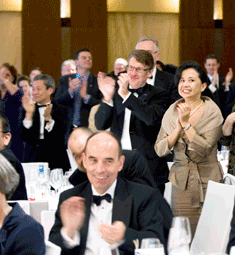 “I really do not feel that I deserve to receive this award, but it is an honour and a privilege”, he said, to a standing ovation. “Really, this honour goes to the embassy team; they do such a sterling job on behalf of the British community in Japan”.

The gala evening began with the guests being greeted in the foyer of the hotel’s ballroom to melodies played by a classical string quartet with a British twist. Bar staff from the UK served remarkable concoctions—including excellent martinis as well as gin and tonics—by London-based boutique spirits firm Sipsmith.

Guests took their seats to the strains of the VITA Brass Ensemble performing well-known tunes by The Beatles.

No sooner had they been seated, than attendees of the event were treated to a video demonstrating precisely why Britain—and not only the business aspect—is great. The year 2012 will go down as one of the greatest in its history. 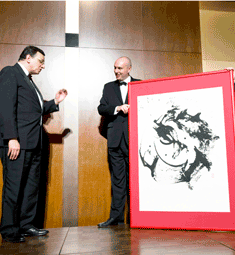 The BCCJ awarded Ambassador Sir David Warren a work of calligraphy by Ishinomaki artist Sougen Chiba, as a gesture of appreciation for the work he has done during his four-year tenure in Japan.

In the video, Jessica Ennis powered to victory in the heptathlon at the London 2012 Olympic and Paralympic Games and Mo Farah cruised to gold in the 10,000m event. The UK’s paralympians also featured heavily, alongside images of the Best of Britain, ranging from Scottish lochs to cuisine, art, sport, fashion, culture, design and history. And not forgotten was the queen’s diamond jubilee, and her unforgettable role in the opening ceremony of the Olympics.

Nick Walters, BCCJ president, then took the microphone and quickly reminded our Australian cousins that the London games were the best ever.

Walters reeled off a series of numbers that show why 2012 has been such a good year for the UK in Japan, from the 450 British firms that are operating here, to the £8bn worth of exports in the form of British business and services and the £125mn that has been invested by Nissan Motor Co., Ltd. in the UK this year.

A very British meal was served to mark the occasion, starting with traditional ham hock jelly with British piccalilli, autumn pumpkin and roasted woodland chestnut soup served before the classic beef wellington arrived. The stilton and ricotta cheese terrine was followed by an apple crumble tart with cinnamon ice cream.

Throughout, the dishes were matched with an array of wines courtesy of Berry Bros. & Rudd, the UK’s oldest wine merchant, including the 2005 Nyetimber Classic Cuvée, the 2011 Berrys’ Own Selection White Burgundy and the Berrys’ St James’s Finest Reserve Port.

A bottle of the award-winning Talisker Single Malt Scotch Whisky was placed on each table, and quickly found a number of new fans. 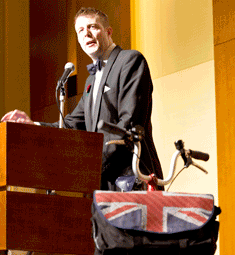 Brompton started out as a small firm making bicycles in a railway arch in East London and found it difficult to secure funding from banks to help it expand, Roberts said.

Undeterred, the firm had enough self-belief to continue on the same track and, in 1995, was recognised for its persistence by being awarded the Queen’s Award for Excellence.

Similarly not being put off by the apparent need for a kick stand for a bicycle to be a success in Japan, Brompton is increasingly seen on the streets of the nation’s cities, Roberts said, and at all levels of society.

“When David Cameron came to Japan in April, he gave Prime Minister Yoshihiko Noda a Brompton bicycle, so our products have become gifts of state”, Roberts added. 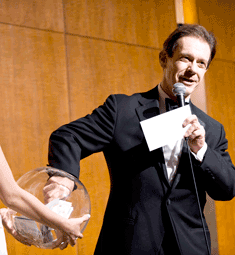 Gregor Andréewitch, general manager of the Conrad Tokyo hotel, draws a card for a two-night stay in a Conrad suite.

The evening then moved on to the main event, with BCCJ Executive Director Lori Henderson announcing that a record 38 nominees had been put forward, representing member firms across many industries, from education and the media to engineering, helicopters and mining.

“This just goes to show that British business runs wide and deep in this country”, Henderson said, before handing over to Sir David for a brief introduction.

“Over the last 35 years of British trade relations with Japan, I have made many happy memories working with the chamber of commerce”, he said.

“I first knew of the work the chamber did back in the late 1970s, and it has been my privilege to work with you during the last few years.

“This is a superb chamber of commerce”, he added.

The ambassador paid tribute to the way in which information is shared among member organisations and the assistance that is provided to newcomers to the Japanese market, as well as to all the firms that have contributed—and continue to contribute—to the recovery and reconstruction efforts in the Tohoku region in the wake of the catastrophic events of the 2011 Tohoku earthquake and tsunami.

For its efforts in north-east Japan, the Social Responsibility award went to Lush Japan Co. Ltd, the UK-based cosmetics firm that was founded in 1998 and arrived in Japan the following year.

The firm—which has 151 shops here, a factory in Kanagawa and over 1,600 employees—has produced a number of items designed to support regions affected by the Great East Japan Earthquake.

Speaking to BCCJ ACUMEN after receiving the award, the firm’s Emi Akiyama said: “I think this award will give new confidence to our staff and the people of Tohoku and we are very happy to have been recognised in this way.

“We will continue to do our best”, she added.

Suzanne Price, founder and CEO of Price Global, was then called to the stage to accept the award for Entrepreneur of the Year.

Established in Japan in 2005, Price Global provides consulting and facilitation services across the Asia-Pacific region.

The third award of the evening, for UK–Japan Partnership, went to Yagi Tsusho & Mackintosh, the textiles manufacturer that has been making quality garments since 1946.

Accepting the award, Osamu Nakamoto, director of Yagi Tsusho, which imports and promotes high-quality fashion goods, said: “This has come as a big surprise. It is a big honour to our company and we will do our best to continue to contribute to business between Japan and the UK”.

The decision for the Person of the Year must have been one of the easiest for the panel of five judges: Sir David’s links to Japan date back to his first posting here in 1978 and the queen knighted him for helping Britons after last year’s triple disaster.

Having a key role in the effort to promote trade and investment between Japan and the UK, Sir David was instrumental in significant new investments in the UK involving Hitachi, Ltd., Nissan Motor Company Ltd. and Mitsubishi Heavy Industries, Ltd.
Following his retirement, Sir David will assume the post of chairman of the Japan Society in the UK.

“This award goes to underline the vast array of expertise and skill that is to be found in the British business community here in Japan and the commitment of our companies to this very important market”, he said.

The final award of the evening—and arguably the most prestigious—was for Company of the Year. Yoshiaki Komatsu and Yukari Yomo accepted the honour for GlaxoSmithKline on behalf of CEO Philippe Fauchet.

The firm, which aims to launch as many as 40 new products in Japan in the next few years, has also been very active in corporate social responsibility efforts in the Tohoku region through its Team Orange volunteers.

Speaking to BCCJ ACUMEN just moments after accepting the award, Komatsu said: “We can go back to all our staff now and say ‘look what you have all won’.

The 2012 awards ceremony concluded with an after party at the hotel’s Twenty Eight Bar & Lounge.

Person of the Year—Sir David Warren KCMG
Ambassador to Japan from July 2008 to November 2012, Sir David has promoted British interests across all fields in Japan and ensured the maximum potential for UK trade and investment during his tenure.

Company of the Year—GlaxoSmithKline K.K.
Since its establishment in 2001, GSK Japan has outpaced the market in terms of growth and ranks among the top 10 pharmaceutical manufacturers in the country. The company has served the people of Japan through innovative pharmaceuticals, vaccines and consumer healthcare products.

Social Responsibility—Lush Japan Co., Ltd.
Has started buying fresh raw materials such as apples, potatoes and rice from Kessenuma and other disadvantaged areas in Tohoku, to produce its handmade cosmetics. Donates all its Charity Pots profits to grassroots organisations in Japan.

Entrepreneur of the Year—Price Global
Established in 2005 by Suzanne Price, Price Global—a leading resource for Diversity and Inclusion, People Development and Wellness—has serviced over 20 multinational clients and provides consulting and facilitation services in Japan and across the Asia Pacific region.

JUDGES
To ensure transparency, each judge independently returned their score sheet to the BCCJ Secretariat by the deadline. The scores from each judge were totalled for each nominee and the nomination with the highest accumulative score was declared the category winner. The final results remained confidential until the BBA ceremony on 2 November.