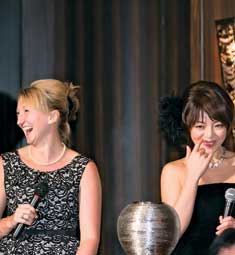 The ability, knowledge and sheer determination to succeed that is displayed by British businesses in the fiercely competitive Japanese market were again on display at the annual presentation of the BCCJ British Business Awards.

The glittering 1 November event, hosted at the Mandarin Oriental, Tokyo, also marked the 65th anniversary of the British Chamber of Commerce in Japan.

Although the chamber is today a vastly different organisation compared with what it was in 1948, British firms’ commitment to this market remains unchanged.

The record 62 nominees across six categories contested this year reinforce that belief. As Lori Henderson MBE, executive director of the BCCJ, aptly stated, the nominees ranged from education to engineering, cars to cupcakes, and hospitality to helicopters.

The gin and tonic was sublime; the sweet vermouth and rosehip bitters martinis packed a fierce punch. 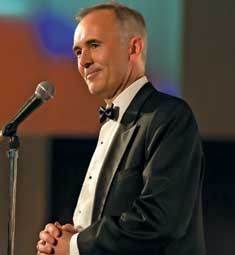 Guests were ushered into the ballroom to the accompaniment of classic British rock tracks by The Beatles, Queen and The Police, among other musical greats, performed by Mac & Aimee.

MCs Guy Perryman and Madoka Kato, the voices of London Hit Radio on InterFM, then began the formal proceedings for the evening.

As well as being the 65th anniversary of the chamber, BCCJ President Alison Jambert pointed out that 2013 also marks 400 years since the first diplomatic mission from Britain arrived in Japan. You can read more of her speech on page 15.

The ballroom then descended into darkness as virtuoso violinist Diana Yukawa took the stage. Just before she struck her first note, the stars of the night sky were projected onto the walls of the ballroom, and were replicated by lights in her dress.

As the first course was served, Harry Sugiyama, goodwill ambassador for the British Embassy Tokyo’s Food is GREAT campaign, took the stage. He reminded the guests that UK cuisine is about far more than fish and chips, reiterating his commitment to getting that message across to Japan.

The first course alone demonstrated just what Britain has to be proud of when it comes to food: Dover sole and clotted cream with a toasted English muffin, aioli and tomato coulis with vegetables.

That was followed by an equally impressive baked Scottish salmon with basil crust, served with sautéed spinach and truffle-flavoured lemon chutney. Guests were then treated to grilled Okuni beef with grain mustard-flavoured gravy, fidget pie and braised red cabbage with a hint of Earl Grey tea.

To round off the meal, guests were served a dessert platter containing Stilton cheese, a nut and dried fruit tart, and Cotswold honey ice cream with blackcurrant compote. 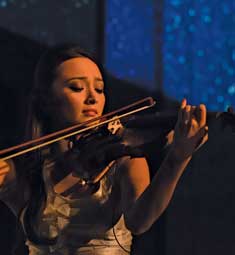 Throughout the evening, a selection of excellent Berry Bros. & Rudd wines was served, including a 2012 New Zealand Sauvignon Blanc and a 2010 Argentina Malbec. Each table was also provided with an impressive bottle of malt whisky, courtesy of the Scotch Malt Whisky Society.

Ambassador Tim Hitchens prefaced the announcement of the winners by expressing his gratitude for the support the embassy receives from UK businesses in Japan and applauded those firms’ achievements.

“This evening is a wonderful testament to what has been happening in the British business community here in the last 12 months”, Hitchens said.

He then singled out a number of firms for their recent successes.

These include the firm behind the Hailo taxi-hailing smartphone application, the advances made in Japan by Airbus S.A.S—its planes’ wings are built in the UK and its aircraft are powered by Rolls-Royce engines—as well as the joint project involving the BBC and Sega Corporation to develop Orbi, the interactive nature-themed attraction in Yokohama.

Five of this year’s award recipients were selected by a panel of six external judges. These individuals were able to draw on a wealth of Japan and UK experience in business, finance, culture and the arts.

The first award of the evening was for Community Contribution. Lush Japan Co., Ltd. fought off competition from 11 other firms and organisations to take home a British Business Award for the second consecutive year.

Accepting the award for the Dorset-based firm, Emi Akiyama and Maho Takahashi described Lush’s efforts to assist local communities as “our life’s work”.

Expressing his gratitude for the honour, Crane admitted he had “stumbled across Japan”, but had very quickly fallen in love with the country, its people, and the cuisine. “[Those things] motivated me to build my career here, to be a part of the very special place that Japan is”, he said.

The third award was for UK–Japan Partnership, with helicopter manufacturer AgustaWestland and Kawasaki Heavy Industries, Ltd. recognised for their alliance.

Andy Symonds, president of AgustaWestland Japan, said the collaboration is certain to grow over the coming years, given the recent signing of a series of security and defence agreements between Britain and Japan.

The award for Global Talent, sponsored by the British Council Japan and IELTS, was accepted by Brian Christian, principal of The British School in Tokyo, which will next year celebrate 25 years of education and has this year nurtured 21 students through A-levels and on to some of the top universities in the world.

Guy Perryman was, for once, speechless when it was announced that he had won the Person of the Year award. Recovering his poise to accept the honour, which was voted on by chamber members, Perryman expressed his gratitude.

“I love what I do, the music I play and the people that I get to meet. This is an amazing reward for something that I already love to do”, Perryman said.

The final accolade of the evening, contested by seven firms that include some of the biggest and most successful names in British industry, went to Custom Media K.K. for its growth and development over the past 12 months.

Accepting the award from the ambassador, Robert Heldt, president of the firm, thanked the judges for “recognising small businesses and the role they play in today’s challenging business environment”.

The 2013 awards concluded with an after-party at the hotel’s Signature bar on the 37th floor.

A special thanks to the sponsors and judges of the event:

In association with
This is GREAT Britain
VisitBritain
British Council Japan