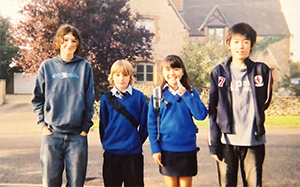 When I turned 11, my parents told me that our family would move to Britain for my dad’s work. It was my first time travelling abroad, let alone the first time moving house. I had never been on an airplane and could not sing “The ABC Song” to the end. While I was young enough to be excited about my first flight abroad, I still remember missing my friends so much that I burst into tears at Narita International Airport on the day of departure.

When I arrived at Heathrow Airport with my mother and brother, there was a small man waving to us. He was one or two heads shorter than the people around him. That was my dad. He had left Japan a couple of weeks before us so that things would be ready for us to adjust seamlessly. I had always thought my dad was tall. Seeing him here was when I finally realised I was no longer in Japan.

Driving to my new home from the airport took about two hours. It was in a little village in Swindon called Hannington. All I could see were green fields. There were no people waiting, but cows and sheep greeted us. 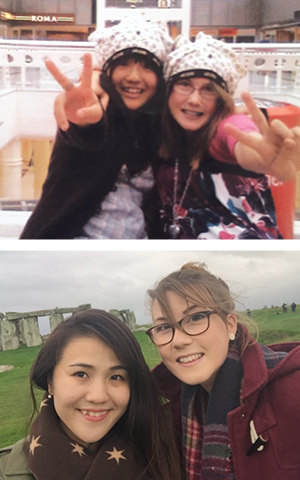 My brother went to a boarding school in London, but my parents decided that I should attend a local school. Fortunately, there was another Japanese girl there, but she returned to Japan only a few days after I enrolled. Then I was alone.

On the first day, I followed the instructions in the letter from the school and went to the bus stop 10 minutes before the appointed time. I waited 20 minutes more and finally a large car, presumably the “bus” mentioned in the letter, arrived. I was very worried that I would be late for class, but the other students did not look as concerned. I came to understand that if you say, “The bus was late”, the teachers would not count you as tardy. How surprising!

On my first day of class, being someone who could not fully sing “The ABC Song”, I could not understand what everyone was saying. The teacher started calling out names, and I could at least guess that we were taking the register. “Kaide … Kidie … Kaedy,” she called. Everyone looked at me on hearing an unfamiliar name. I figured that was me and said, “Yes”. From that day, I became Kaedy instead of Kaede.

Many Japanese names are difficult to pro­nounce for English speakers, so I decided to give up my real name and chose the closest-sounding one. It was not just the pronunciation that was difficult; my bus ticket showed different surnames each year. Hasejava, Hasaguwa, Hasegeua … I finally got my actual surname on there for my final year.

There were so many cultural differences that shocked me at school. For example, students were not allowed to shave their hair, but they could dye it, unless it was a novel colour, such as green. Even girls had rugby lessons and were asked to own a pair of rugby shoes. Students were allowed to leave class to go to the dentist or music lessons. Every day was fresh and full of surprises.

One day, I took home a difficult math question. It was something along the lines of calculating √873.74. I was wondering how I would ever do this, since I was not familiar with square roots. I asked my mother but she was also uncertain, so we went out to ask our neighbour, a grand lady.

She welcomed us very kindly and gave me a scientific calculator. She started typing in the numbers and said, “This is very easy. Just press this button and this one”. My mother and I had not expected it to be so simple. We had never heard of using a calculator at elementary and junior high schools in Japan. It was, again, a big surprise.

Our family was blessed to have wonderful neighbours. Some gave us raspberries from their garden, some took us to famous tourist locations and some invited us to Pilates lessons held at the village community hall. Every neighbour was our family’s British teacher and someone on whom we could rely. 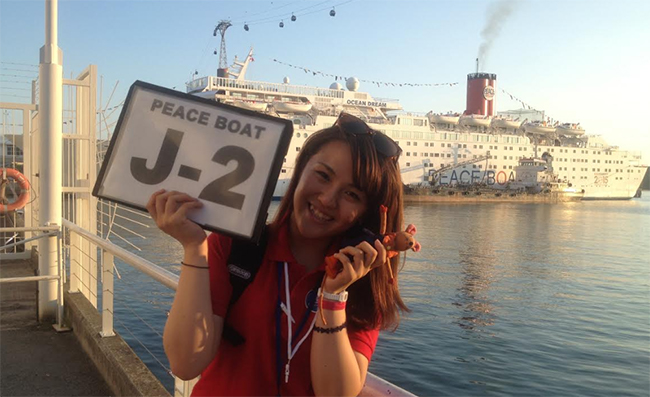 Through my local school life, I was able to find a lifelong treasure: British friends. They always supported me with English behind the scenes, helped me answer questions when the teacher asked me, and we would always go out for lunch together. I was able to learn many English words, and about British culture in general, by being with them.

What was so special and kind about them is that they showed an active interest in where I came from. Our interactions started when they tried my Japanese stationary and blurted out, “That’s so cool!”

We talked about any and all things, including Japanese cuisine and snacks, school life and current fashion trends. When I invited my friends to a sleepover, we played with Japanese TV games and a portable photo-shooting machine known as purikura. My friends enjoyed trying on yukata and eating the hand-rolled sushi and curry my mother made.

One day, when I went out shopping with my closest friend, she suggested buying matching necklaces, which was then popular among middle-schoolers. One of the necklaces read “Best” and the other had “Friends” on it. From that day on, we became best friends.

Not only did my English improve markedly after making the acquaintance, but I gradually began to fit into British society. I preferred to have a birthday cake with colourful, heavy icing and I would put bacon crisps in my sandwich. I would leave midway through class to have a private guitar lesson, and it became a routine to stop by the fish and chip shop after school. Perhaps most surprisingly, I found myself placing my shoes in a suitcase when travelling, without first wrapping them in a plastic bag.

The same best friend once invited me on her family trip to Scotland. We travelled with her grandparents and parents and stayed in a caravan for a month. As a lasting memory of the trip, her parents bought us little matching toy mice at the Isle of Skye. I named mine Skye. When they gave this to me, they said, “It will be your travel buddy from now, please take it on lots of wonderful journeys.” And I have. 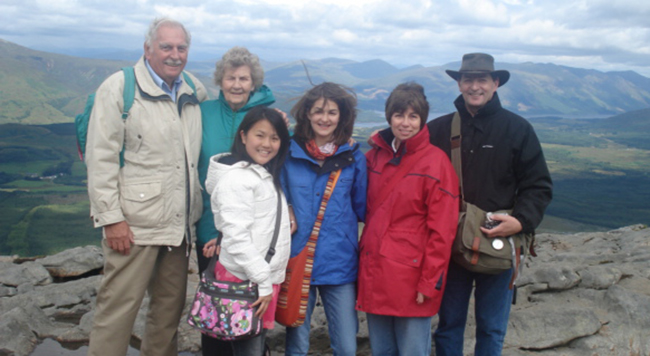 An unforgettable family trip to Scotland 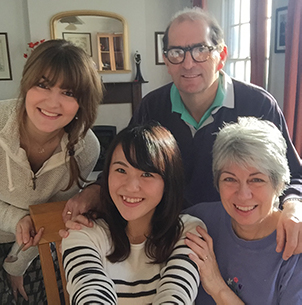 Reunion with my best friend’s family after seven years

When my fifth year in Britain was coming to a close, I was told we were moving back to Japan. Although there were many nights—particularly early on—when I looked up at the sky and longed to return, I no longer wanted to move back. I cried once again at Heathrow Airport, just as I had done when I first left Tokyo. I still remember my best friend’s dad, who looks a little scary and strict at first glance, crying together with me when he heard I was leaving.

On returning home, I wanted to ensure that I made use of my English skills. So, I travelled around the world for three months and visited 20 countries as a volunteer interpreter for a non-governmental organisation. Of course, I took my travel buddy, Skye, with me.

After visiting and getting to know other countries, I realised how much I liked Britain and also how courteous British people are. Even a little boy opens the door for others and points out steps. “After you,” is always at the forefront of the British mindset, and the English used is so polite and beautiful.

Seven years after leaving, I travelled there again. My friends allowed me to stay at their homes for two months and drove me to places that I wanted to revisit, in the same car in which their parents used to drive them. My best friend’s dad, who had cried with me when I left, invited me to his garden and we planted an ornamental poppy together, Remembrance Sunday being just around the corner. He said: “Remember, this is your British home. You are always welcome to come back.”

From my experiences in Britain, I learned that to learn another language, you need to under­stand the culture and customs of the country. You must get to know the country itself. I tried to learn about Britain, tried to fit in and get acclimated to the environ­ment. I am very grateful to my friends who, with a generous heart, accepted me for who I am.

Next summer, I will again be in Britain, attend­ing my best friend’s wedding as a bridesmaid.