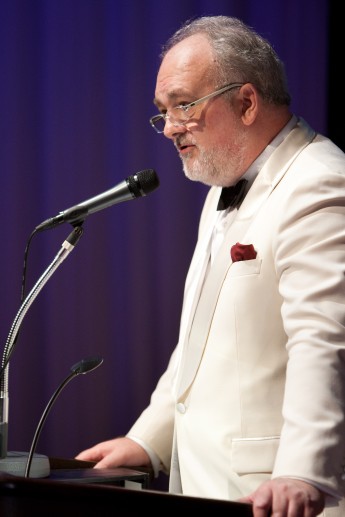 The fourth British Business Awards (BBA) attracted a record number of entrants across the five categories, with the glittering presentation ceremony on 4 November that raised about ¥3.2mn to support business regeneration and capacity-building in Tohoku.

The evening began with a video production by Custom Media—publishers of BCCJ ACUMEN—that featured pillars of this quintessentially British event: cool, classic, cultured and creative products and people.

This year will go down as one of the most testing for the British Chamber of Commerce in Japan (BCCJ), which organises the annual awards, and the UK firms that operate here, and Ambassador David Warren was full of praise for the way in which the British community had responded to the 11 March disasters.

“All of us here tonight have lived through a difficult and traumatic year in Japan”, he said in his address to more than 150 guests. “And all of us have been humbled by the resilience of the Japanese people. We know that Japan will recover, and we will be with her all the way as she does so.

“I would like to thank, on behalf of the embassy, the chamber for all that it has done and for being a beacon of calmness in the immediate aftermath of the disasters”, he said. “You have played such a committed part and an active part in the reconstruction effort, and we are all extremely grateful for that”. 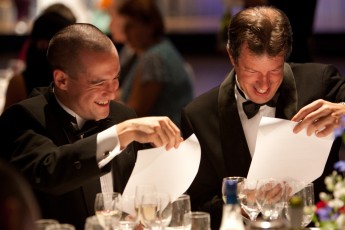 The ambassador said he had been struck by the speed with which people had begun to recover from the “extraordinary psychological shock” of the triple disaster and how they had wanted to re-engage so soon after. He emphasised the importance of the work being undertaken by the BCCJ and the British Embassy Tokyo, as well as the related activities they expected to carry out in the months and years ahead.

The reception began with guests sampling an excellent British sparkling wine provided by the UK’s oldest wine and spirit merchant, Berry Bros. & Rudd. Setting the tone for the evening, the Nyetimber is from West Sussex.

The guests were treated to a stirring rendition of tunes by the Tokyo Pipe Band, resplendent in their full Scottish regalia. A lone band member then piped the head table to their seats, thereby formally starting the evening’s proceedings, overseen by Master of Ceremonies Tom Wilken.

Once all had been seated, the microphone was turned over to Michael Di Stasio, producer of Rock Challenge Japan (RCJ), which will be staged in Shinjuku in February. An initiative to engage young people in dance, music and performance, RCJ has been held here annually since 2006. Its forthcoming theme will be “Healing through the Arts”. 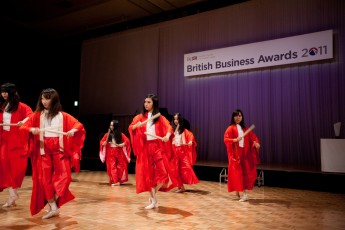 One of the dance groups that will be performing at the February event is the Austrian Ballet School, who provided guests with a preview of their routine. A fusion of ballet with modern rhythms and moves, it featured nine girls and a boy in dazzling red-and-white outfits performing tightly choreographed steps with strong Japanese undertones.

The meal was then served, with each table receiving a bottle of fine Scottish whisky—such as a 14-year-old Arran single malt—and Royal Deeside water provided by Whisk-e.

The menu for the evening was created by the executive chef of the ANA InterContinental Tokyo, Jean-Marie Pougnet, who incorporated some of the much-loved delicacies of the British Isles.

Representing Wales was a heart-warming leek and potato soup served with laver bread, while Scotland offered its grilled salmon with asparagus, smoked tomato jam and lentil vinaigrette. A taste of England came in the form of traditional roast beef and Yorkshire pudding, potato gratin and seasonal vegetables with horseradish sauce. Northern Ireland was to thank for the curd cake and blackberry sorbet.

Entertained by The Terrific Trio—performing classical tunes on piano, violin and cello—diners were able to admire a sparkling Range Rover Vogue and the eye-catching new Jaguar XJ parked at the front of the room. Guests were also regularly encouraged to step out into the lobby to attach their names and bids to items being offered in the silent auction, the proceeds of which will go to the Tohoku region. 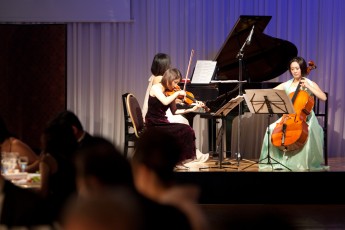 The Terrific Trio on piano, violin and cello.

Articles in the silent auction included an extra-large rugby shirt signed by members of the England rugby team; a baseball cap signed by British Formula 1 stars Jenson Button and Lewis Hamilton; a two-day trip to Kyoto with Walk Japan; and stays at some of the top local hotels including the Shangri-La, Mandarin Oriental, Tokyo, Conrad Tokyo, Peninsula Tokyo, Grand Hyatt and the Hilton.

The auction included copies of the book Mrs. Moneypenny: E-Mail from Tokyo, a special edition published in support of the Japan Society Tohoku Earthquake Relief Fund and signed by the author, who was the evening’s guest speaker.

As well as being a columnist for the Financial Times and star of Channel 4’s Superscrimpers, Mrs Moneypenny explained how she finds time to fly a plane, raise three boys—she calls them “cost-centres”—and look after a golf-mad Australian husband. 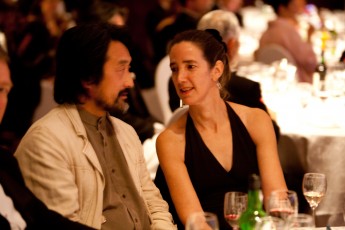 A resident of Tokyo between 1998 and 2000, when she worked for a Dutch bank, Mrs Moneypenny said Japan holds some “extraordinary memories”—including the length of time required to get from Narita International Airport to Tokyo, and the comfort of heated toilet seats.

“I have been profoundly affected by what happened here on 11 March”, she said, adding that it had inspired her to publish all her columns in one book and donate the proceeds to Tohoku relief.

“I get lots of opinions from readers and the column I wrote immediately after the 11 March disaster received one of the biggest responses”, she said. “I am proud to have lived here in Japan, and being British citizens living in Japan provides a great opportunity for us. I know that Japan will rebuild itself and that it will remain the most special place on Earth”. 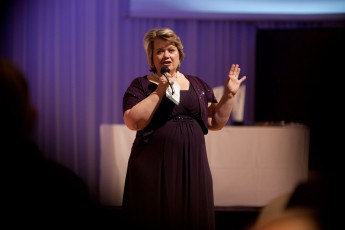 Mrs Moneypenny’s humorous asides were followed by a video, put together by a young boy called Kai, that has become a hit on YouTube. Titled “Fix You” and set to music by Coldplay, the video contains comments of encouragement and support, and spreads the message that, with the help of friends around the world, Japan can recover.

Next on the agenda for the evening was a live auction. One BCCJ member paid ¥100,000 for a framed football shirt signed by Homare Sawa, captain and top scorer of the victorious Japan team in the 2011 Women’s World Cup. Among the other donations were the loan of a Range Rover Evoque for a weekend; tickets to the VIP area at the Tokyo Motor Show and a champagne reception; as well as a one-night stay at the ANA InterContinental Tokyo’s presidential suite with dinner for six at Pierre Gagnaire’s three-star restaurant. 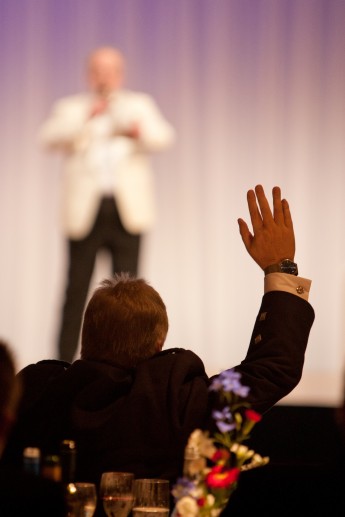 British Airways plc provided two return business-class seats to London Heathrow with two nights at the Chester Grosvenor Hotel, while a master calligrapher, who had lost his home and studio in Ishinomaki on 11 March, donated one of his works.

Ambassador Warren then had the honour of announcing the BBA winners, who had demonstrated business excellence in Japan over the previous 12 months, and presented them with elegant works in marble, sculpted by Tohoku-based Scottish artist Kate Thomson.

The Design and Innovation award went to Nissan Motor Co., Ltd. for its LEAF vehicle, which will go into production in Sunderland early in 2013, with an initial output of about 50,000 units.

A statue was presented to Simon Sproule, vice-president of Global Marketing Communications, with the ambassador commenting that “Nissan’s Leaf electric vehicle, developed in Kanagawa and launched in late 2010, is the world’s first affordable, mass-produced, zero-emissions car and marks a major milestone in the realisation of zero-emission mobility.

“I am thrilled to be able to present this award to Nissan, which will be building the Leaf in Sunderland from 2013”, he added.

The second award was for Environmental Contribution, with the ANA InterContinental Tokyo recognised for its Green Engage environmental programme—a comprehensive sustainability system that measures, reports and, ultimately, leads to a reduction in the amount of energy and water used at the firm’s three hotels in Tokyo, Yokohama and Narita. Presenting the award to Fergus Stewart, regional general manager for InterContinental Hotels Group, the ambassador pointed out that the programme had reduced the amount of energy used in the hotels by 12.6% and water usage was down 8.4%.

There were no less than 10 firms nominated for the Social Responsibility award, the winner of which was Second Harvest Japan.

“Second Harvest Japan, a non-profit organisation, is Japan’s first incorporated food bank and has been pioneering food banking in Japan since 2000”, the ambassador said. “Second Harvest Japan was an exceptionally efficient and effective first responder to the 3/11 disaster”.

The award was accepted by Charles McJilton, CEO and executive director of the NPO.

The penultimate award was Person of the Year, with an impressive six nominees.

“Steve Crane has been working on UK–Japan activities for 10 years and has shown a strong determination to succeed in 2011”, the ambassador said. “Steven runs Business Link Japan, acts as an advisor to UK and Japanese companies, and volunteers assistance regarding the wider issues of UK–Japan relations in the areas of business, education and culture.

“He is truly a positive ambassador for the UK in Japan”.

The final award was in recognition of the Company of the Year, and was accepted by David Swan, managing director of Robert Walters K.K.

“Robert Walters is a strong example of British success in Japan, growing from a handful of staff 11 years ago to become the largest foreign recruiter in Japan”, the ambassador said. “Robert Walters is committed to providing the highest level of services for clients whilst maintaining a positive work environment for staff of 13 nationalities in Japan”.

The evening was closed by BCCJ President Philip Gibb, who said the event had been “a celebration of all that is great in the Japan–UK relationship”.

He also announced that Ray Bremner, Unilever’s senior vice-president for north-east Asia, had graciously offered to cover the cost of all the meals served at the event.

“The people of Tohoku will appreciate the work that you have done tonight”, Gibb concluded.

WHO WON WHAT AND WHY

Design and Innovation
Nissan Motor Co., Ltd.
The Leaf electric vehicle is the first affordable, mass-produced, zero-emissions car; it will be made in the UK.

Person of the Year
Steve Crane
Promoting UK–Japan activities for more than 10 years including running Business Link Japan, advising firms, and voluntarily supporting relations between the two countries in the areas of investment, education and culture.

Company of the Year
Robert Walters Japan K.K.
The largest foreign recruiter in Japan, the firm provides a high level of service and a positive work environment for staff in Japan representing 13 nationalities