British nationals have once again been recognised for their work to further relations with Japan. Two honorary ambassadors—both long affiliated with the British Chamber of Commerce in Japan— are being celebrated for their achievements. 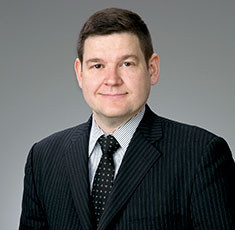 Mark Crowther, former president of International Nuclear Services (INS) Japan K.K., and now head of the firm’s overseas business, was awarded the Most Excellent Order of the British Empire (MBE) in the New Year Honours list for his services to the British nuclear industry in Japan.


Martin Barrow GBS CBE JP, an honorary ambassador for the UK’s Visit Japan campaign, has been rewarded by the Japanese government with the Order of the Rising Sun, Gold Rays with Neck Ribbon for his work to promote Japan as a place for British travellers.

Speaking about their acceptance of the awards from Japanese Ambassador to the UK Keiichi Hayashi, both Barrow and Crowther expressed surprise and a deep sense of honour at having their efforts recognised. Yet, they insisted that the awards belong to their respective teams.

Key bilateral work
“The period I was working in the INS Japan office was a significant period for the UK and Japanese nuclear industries”, said Crowther, who lived in Japan for more than 26 years after arriving in 1987. He joined INS in 2002.

“The UK started the return of nuclear waste—a by-product created in the UK—to Japan”, he said, adding that it was “a complicated international project, involving transport by sea of highly radioactive waste”.

This bilateral relationship in the nuclear sector is a long one, dating back to the 1960s when Tokyo decided that its first reactor would be imported from Britain. That initial import evolved into the provision of support in the form of reprocessing services and, more recently, decommissioning.

In the aftermath of the incident at the Fukushima Daiichi Nuclear Power Plant, following the earthquake and tsunami of March 2011, the relationship reached a new level of partnership.

“The Fukushima accident has brought the two countries closer together at government level, through commitments of cooperation between the prime ministers of the UK and Japan, and on a detailed practical level between organisations, companies and individuals, in which I played a key part”, Crowther said.

“The UK is clearly back on the radar in terms of nuclear industry support to Japan”, he added. “The respect between the two industries has grown significantly”.

Crowther, who moved back to the UK in 2014, also has a personal connection to the region. His wife is from Fukushima Prefecture and he is an honorary ambassador for the region.

Personal impact of disaster
“There are many memorable occasions from my time in Japan, but the strongest memory has to be that of the 2011 earthquake and subsequent nuclear accident at the TEPCO Fukushima Daiichi Plant”, he said.

“While the human tragedy of the tsunami far outweighed that of the Fukushima accident, all of the media focus was fixed firmly on Fukushima.

“Seeing the immediate impact of the state of the prefecture on loved ones was heart-breaking. Working in the industry certainly left me ambivalent in my feelings towards nuclear energy, as I tried to explain the situation to friends and family in Fukushima”, he added.

“It was therefore satisfying—personally and professionally—to be associated, even in a small way, with supporting recovery at the site”.

Early influence
Martin Barrow’s association with Japan goes back even further than that of Crowther. He first landed in Japan in 1964, at the age of 20, accompanied by two friends.

“We had travelled by land from London to South East Asia and then arrived in Kobe by ship”, said Barrow, 70. “We were in Japan for almost two months, travelling everywhere from Kyushu to Hokkaido—from where we left by ship to Vancouver—and we experienced the Japanese spirit of omotenashi so many times”.

A former president of the BCCJ, Barrow, who was born in the Lake District but lives in London, returned to Japan in 1967 to work for the Jardine Matheson Group. After his marriage to Noriko, he completed postings in Thailand and Hong Kong, before returning to Japan in 1974.

One of Barrow’s most prized memories is the four years when he presented giant bottles of White Horse Scotch whisky to winners of sumo tournaments. Another great honour, he adds, was his service to the chamber from 1979 to 1980.

More traffic for business
“Thanks to the good efforts of the Embassy of Japan in the UK, and so many others on both sides, Japan–UK relations are in very good shape, with so many common values and plenty of dialogue between the two”, he said.

“I hope we will see more people going in both directions: tourists to visit and students to study.

“The JET Programme does a tremendous job with so many young British people teaching all over Japan”, he added. “Hopefully, too, there will be more and more inward investment in both directions”.

Barrow’s particular focus is on promoting Japan as a destination for British tourists, emphasising the five key strengths of the country: spirit and hospitality, traditional culture, “cool Japan” fused with tradition, nature, as well as value and access.

“There are so many people across the world who have a deep interest in Japan”, he said, pointing out that they just need to be persuaded to make the trip. “I have never met anyone who has regretted a visit; everyone says after a visit they wish they had visited before”, he added. 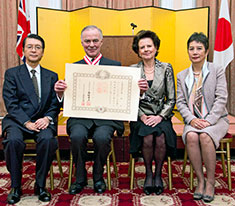 Hugh Trenchard (centre) received his award at a ceremony in December.

Hugh Trenchard, 3rd Viscount Trenchard, has also been recognised by the government here for his contribution to Anglo–Japanese relations. Trenchard was awarded The Order of the Rising Sun, Gold and Silver Star at a ceremony at the Embassy of Japan in the UK in December.

According to the award citation, he has “contributed to promoting parliamentary exchange and mutual understanding between Japan and the United Kingdom”. The honour comes 94 years after his grandfather, 1st Viscount Trenchard, was awarded Japan’s Order of the Sacred Treasure, Grand Cordon. 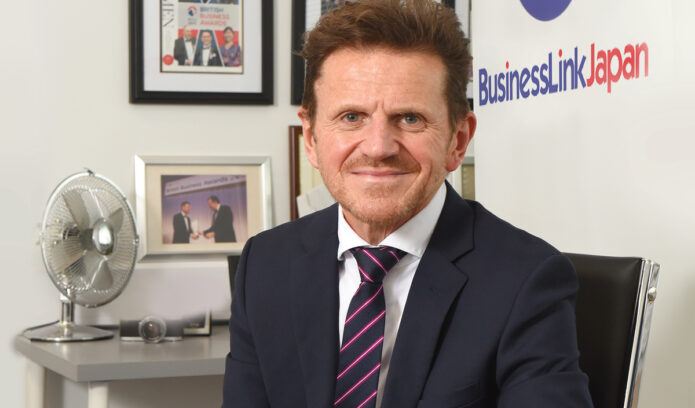