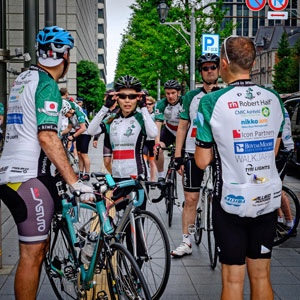 The Knights in White Lycra as they prepared to set off on their 2016 trip.

Founded by Britons Robert Williams and Nick Rees in 2012, Knights in White Lycra (KIWL) is a charity cycling team, comprising riders of all ages and abilities, that arranges annual cycle rides and other events to support community projects in Japan. That has seen the team raise money for regeneration projects in the Tohoku region, and now it rides to support the non-profit organisation Mirai no Mori, which organises camps for disadvantaged children.

To date, KIWL have raised more than ¥30mn—a figure they expect to increase significantly when they set out on their annual ride on 25 May. This year, they are targeting a figure of ¥7mn, and to raise that they need all the sponsorship they can get.

Much of the sponsorship has been driven by personal connections—Williams has long played an active role in British social life in Tokyo as a co-organiser of the monthly Brits at Lunch and often attends BCCJ events. 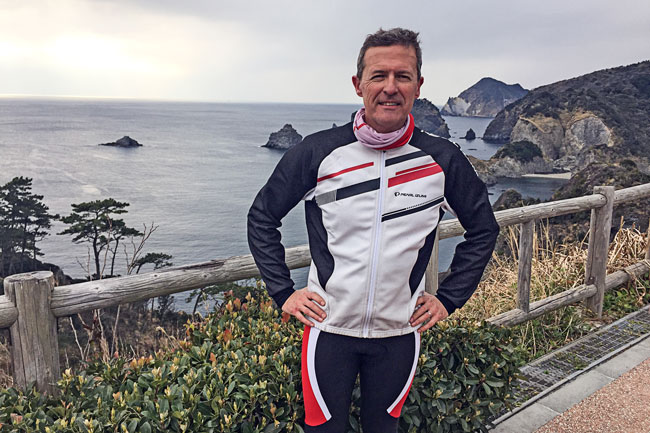 Williams on a training weekend in Shimoda, Shizuoka Prefecture.

“We’ve known Rob Williams from attending many BCCJ events over a number of years, so when he told us in 2012 about starting KIWL, we did not hesitate to help promote this great cause”, said Simon Farrell, publisher of BCCJ ACUMEN and co-founder of Custom Media.


KIWL enjoys a close relationship with its sponsors, given that many employees of sponsor firms participate in the rides and other events. In 2016, Team Thomson Reuters went out in force as five of us joined the charity cycling from Tokyo to Iwate—550km over four days—raising more than ¥7mn”, Ayaka Tsuchiya, a relationship manager at the financial information firm, wrote in an email. 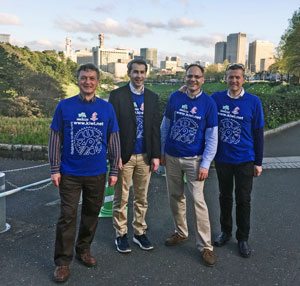 Rob Williams (right), with supporters at the Imperial Palace Cycle, Jog or Walk event in April, where they raised more than ¥500,000.

And in the case of Robert Walters, it was participation by their consultants that led the firm to sponsor KIWL.

“We find that it is easiest to solicit companies who have employees participating in the ride”, explained Williams. “That is why we like to accept new riders every year, as it brings new sponsorship opportunities. Not only on a corporate level, but also individual riders gain a lot of sponsorship for their efforts from colleagues, friends and family”.

Others have been able to participate in ways beyond taking part in the cycle ride.

“Rob [Williams] approached me three years ago to ask if I could help find a sponsor to supply a support vehicle from among my logistics company contacts”, said Jeremy Sanderson, chief executive officer of Icon Partners. “At that point, I offered to sponsor a vehicle through my firm and drive it myself”.

Making a difference
Among sponsors, specific motivations differ, but they all ultimately come down to the difference that can be made through the projects with which KIWL works.

“Supporting children in need is a no brainer, and Mirai no Mori touches the hearts of all who get involved”, said Tsuchiya. “Their influence is not only remarkable, but life changing”.

And the nature of KIWL, as well as the projects it supports, dovetail with the wider corporate social responsibility (CSR) initiatives of firms, making sponsorship even more appealing.

“We have always championed educational equity challenges in Japan, as well as driven diversity acceptance in Japan’s workplaces through our business and CSR initiatives”, said David Swan, managing director of Robert Walters Japan. “We also have a history of supporting sports teams and events, as we believe sports provide people the opportunity to acquire important abilities such as endurance, teamwork and leadership.

“Therefore, it was only natural for us to see great value in becoming a sponsor of the Knights in White Lycra”.

For many, sponsoring KIWL becomes a repeat commitment. Thomson Reuters, for example, have supported the team for four years and are a gold-level sponsor. 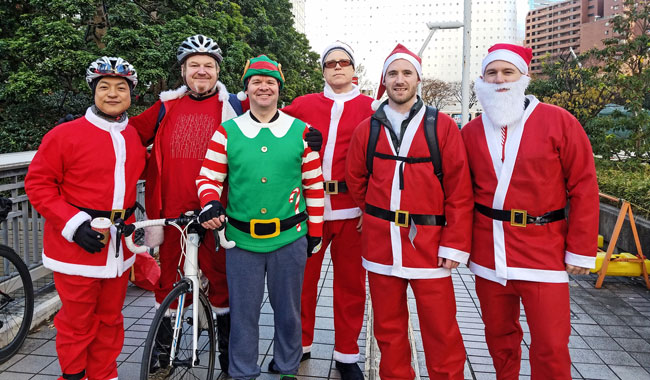 In December, the team delivered presents to a Tokyo children’s home.

“We approach previous years’ sponsors and many repeat their sponsorship because companies clearly see value in supporting us and the causes we ride for”, said Williams. “Indeed, many companies find it a positive association because we promote health and fitness, we welcome men and women of any ability and all ages, and we support local grassroots NPOs where the money we are capable of raising actually makes a positive difference”.

Looking ahead, KIWL is trying to expand its sponsorship base. Up until now, it has typically approached foreign firms, but that is beginning to change.

“A future goal is to encourage Japanese firms to sponsor us”, said Williams. “We are delighted that in our 5th year we have secured the sponsorship of our first ever Japanese company”.

KIWL is seeking sponsorship for their 25–28 May ride from Tokyo to Ichinoseki.
To find out more, visit www.kiwl.net