Everybody has had to adjust to life in the ongoing pandemic. Lockdowns and restric­­tions have not just impacted our daily lives, but also have affected global and national economies. Now, with vaccination programmes being rolled out, business people can tentatively plan for a post-pandemic future.

On 2 March the British Chamber of Commerce hosted a virtual event in which financial and economic experts examined the impact Covid-19 has had globally and looked ahead to what this year may have in store for Japan, its economy and the rest of the world. 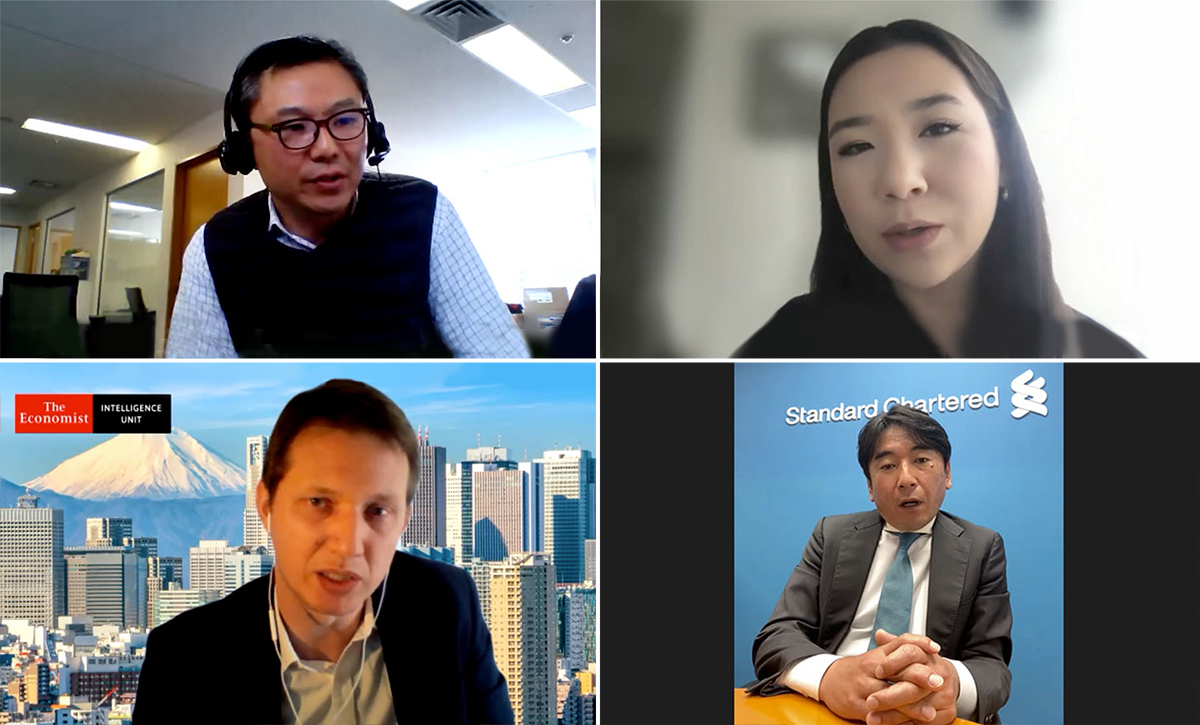 Look back to learn

Takuji Okubo, the North Asia director of The Economist Corporate Network, shared his predic­tions regarding Japan’s economic recovery after the pandemic. He also compared the immediate future with the nation’s recovery from the global financial crisis of 2008 caused by the Lehman shock. “So many economists, including the Economist Intelligence Unit, tend to feel that it’s going to be a slow recovery”.

He compared Japan’s economy before that disaster to its current state resulting from the pandemic. “I think one big difference between now and then is the strength of the yen. The value of the yen strengthened a lot between 2007 and 2011. The yen was actually as weak as ¥130 per dollar between 2006 and 2007. In 2011 and 2012, it strengthened to as much as ¥80 to the dollar. For Japanese exporters, it was very painful. So, I think this time around, fortunately for the Japanese economy, the yen remains stable. I think that’s actually a plus for the Japanese economy”, he said. Okubo explained that the recovery should only take three years.

Okubo also addressed the potential changes in geopolitics this year, highlighting China’s role in this. “Globalisation will continue, but at a slower pace”, indicating the acceleration of slowbalisation, namely, the slowdown of global integration. “China wants to continue to integrate with the global economy. I personally think we will be seeing deglobalisation or a decoupling of the Western economies with China’s economy”.

Dimitry Rakin, associate director at The Economist Corporate Network, North Asia, broke down China’s presence in the global market, noting some positive attitudes toward China by foreign countries. “Companies could feel a little bit more positive towards the business environ­ment in China because of the way China handled the pan­demic, and because of the way that the economy has been developing in China. We also saw from survey data that an over­whelming majority of the companies are still planning to invest more in China, and that is the main destina­tion in Asia for investment.”

Echoing Rakin’s sentiments, Okubo agrees on China’s role in leading the international economy during the pandemic. “Pretty much everywhere in the world—except China—suffered negative growth year on year”. He added that the world economy had shrunk 3.3 percent; Japan’s was down 5.3 percent, while that of the UK—with one of the steepest declines globally—was down 9.9 percent. The only country to experience economic growth was China, with a 2.3 percent year-on-year increase.

Another side effect of the pandemic has been the switch to digital. Working from home has been adopted by countless firms throughout the world. Japan, typically known for its paper transactions in banking and business, has also made changes to adapt.

“We are reducing traditional paper-based production as a bank, internally and externally. This is a critical initiative for the efficiency of business. Not only for the bank but also for clients”. As well as adapting to digital banking, Standard Chartered has also adjusted to working from home. “Our work from home rate is 50–70 percent, in accordance with government guidelines and the state of emergency”.

Tahara also welcomed the Japan–UK Compre­hensive Economic Partnership Agreement, as well as the UK’s application to join the Comprehensive and Progressive Agreement for Trans-Pacific Partnership.

“The UK and Japan can take up important roles and business opportunities here”, Tahara said, “and Standard Chartered can help those companies on the ground through our networks in trade finance, cash management and foreign exchange management”.