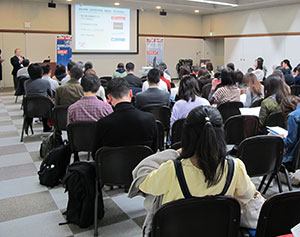 More than 300 prospective students of UK institutions participated in a British Council event.

In a low-key graduation ceremony at the University of Leicester in January 2016, Princess Mako of Akishino stepped forward to accept her postgraduate qualification in art museum and gallery studies from Chancellor Bruce Grocott.

The 24-year-old princess, the oldest daughter of Prince Akishino and grand-daughter of the Emperor, completed an eight-week placement at Coventry Museum as part of the course, but managed to keep her identity secret from fellow students until she completed her studies.

She described her year in Leicester as “a wonderful experience”.

“I would like to express my sincere gratitude for having had the opportunity to pursue my studies in such a favourable environment. It has been a very fruitful year for me”, she said in a statement released by the Imperial Household Agency. “I hope to apply what I have learned at postgraduate school in the future”.

That sort of royal endorsement can only help raise the profile of the University of Leicester and British tertiary education in building on the high regard in which UK universities have been held by Japanese for many years.

“Japanese people in general have a great deal of interest in British culture, heritage and our language”, said Nigel Lee, international officer for Staffordshire University. “On top of that, young Japanese are choosing to come to the UK to study because of the job opportunities that then open up to them.

“In the same way that we are encouraging our British students to spend some time abroad—to study in Japan or China for the language benefits, the culture and all the opportunities that entails—we increasingly see the same way of thinking among students in other countries”.

Staffordshire University was one of 36 British universities and colleges taking part in the Education UK Spring Exhibition 2016. It was organised by the British Council and hosted in late March at the council’s offices in Chiyoda Ward. A further exhibition on studying in the UK will be held on 22 October at Akihabara UDX Gallery.

“We attended the event in October last year but this is our first time in Japan for the spring event”, said Lee. “Up until now, we have had little focus on East Asia and, of our 15,000 students, less than 100 are from this part of the world. But for us, we see great potential here”.

Staffordshire University has forged relationships with two Japanese institutions that are similarly keen to build ties with universities in English-speaking nations. The move follows the government’s declaration that Japan requires many more multilingual businesspeople if it is to thrive in an increasingly global marketplace.

Staffordshire has linked up with Nippon Sports Science University for exchanges on its sports programmes, and with Tokyo University of the Arts, where many Japanese undergraduates are interested in the ceramics for which The Potteries region of Britain is globally renowned.

Talks are also under way with other Japanese institutions to collaborate in another of Staffordshire’s traditionally strong areas: education.

“It can take time to build these relationships, but we have a long-term vision for what we want to do, and we’re very keen to build these local partnerships”, said Lee. “And by playing to our strengths, we feel we can do just that”.

Demand had been so high among British institutions wanting to take part that at least six were on the waiting list when the delegation left the UK, said Hal Parker, projects manager for education at the British Council in Tokyo.

“We are certainly seeing signs that it is recovering after around 10 years of declining figures”, he told BCCJ ACUMEN.

“In the 2014–15 academic year, the number of Japanese studying at UK higher education institutions was up 2%, following a similar increase in the 2013–14 academic year”, Parker said.

Short-term university courses, such as summer or spring courses, and junior year abroad programmes have seen “significant growth” over the past five years, he added.

“A lot of young people are feeling the strong push by the government to improve their English and to get overseas experience”, said Parker. “That message is being reinforced by their schools or universities and industry in general. And in a domestic market that is this competitive, having those skills and experience is going to make a candidate stand out”.

The introduction of new scholarships specifically for overseas studies, which are being heavily promoted on television, are also making life easier for Japanese students who wish to study in the UK, although the institutions admit that costs can be high.

British students can expect to pay £9,000 a year for tuition, with living expenses, accommodation and travel on top. That figure is higher for international students. A three-year engineering degree is likely to set a Japanese student back a total of £70,000, said Christopher Dean, assistant director of the international office of the University of Exeter.

“But that can still work out cheaper than a degree from a US university, which is typically over four years, or a master’s qualification, which takes two years—instead of one in the UK”, he said.

The University of Exeter is ranked seventh of the 127 universities in the UK and has around 35 full-time students from Japan every year. More are being accepted for a semester to improve their English skills.

“Typically, overseas students will choose the country where they want to study and then, when they have done the research, the institution where they want to be”, said Dean. “And British universities generally come high-up in the world rankings.

“We have learned that one of the things appealing to Japanese students is the system of internships that British universities use to give them hands-on experience in the sector that they are going to be working in, partly because that introduces them to the right people and can be a very good way into a first job”, he added.

The Japan market for the University of South Wales is “small, because it is a new market for us”, said Christine Hawdon, the university’s international recruitment officer. However, subjects such as art and design, the creative industries and psychology—including niche programmes such as art and music therapy—have proved attractive to Japanese students.

“I have met with the Welsh Government office while I have been here and I’m hoping to be able to use that to build new links with Japanese companies both here in Japan and with facilities in Wales”, Hawdon said. “Ultimately, I would like to see a real Japanese community on our campus in Cardiff”.

Primarily designed to give prospective students an insight into studying in the UK, the event also included an opportunity to speak with alumni of British universities.

“I had originally planned to go to a US university because my area of study—intercultural communication—is big there”, said former student Kota Hanzawa. “But when I began to look more closely, the universities with my course were all in rural parts of the US.

“At that point, I began to look at the UK and found courses in Warwick, Surrey, and at Birkbeck, the University of London.

“The more research I did, the more I realised that Birkbeck is ideal for me as it’s in the middle of London and I would be communicating—and therefore learning—all the time”, he said. “Another bonus was that I would be able to work as well as study”.

In addition to working for a food company, Hanzawa is part of a start-up called Bens Education Centre Ltd. He said he hopes to have a career that is connected to both Japan and the UK.

“This has been a fantastic opportunity for me and I have learned so much”, he said. “Now, I want to use those experiences to bring together companies in Japan and the West”.