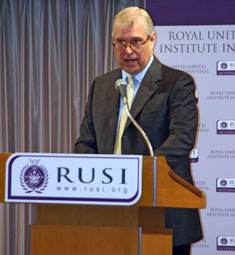 The Duke of York spoke in Tokyo on 1 October.

The Duke of York has called on Britain and Japan to embrace the challenges and promises of globalisation and to work more intensively together to make the best of the bilateral partnership that already exists and a historically long and successful relationship.

The duke was speaking at a conference in October titled “Rejuvenating UK–Japan Relations for the 21st Century”, jointly organised by the Sasakawa Peace Foundation and the Royal United Services Institute.

The two-day conference considered the state of the UK–Japan security partnership in the modern global context, as well as the possibilities of enhanced cooperation on the development and deployment of defence equipment, measures to counter non-conventional threats, and how the UK–Japan relationship fits into Tokyo’s close military alliance with the United States.

In his keynote speech, the duke pointed out that, since he was piloting a helicopter for the Royal Navy, there have been dramatic changes in the world—not least in the speed of communication and information dissemination among countries.

“I would begin by saying that the 21st century has become a different place in the 13 years that have unfolded, and we must therefore be cognisant of this when we look at security relationships”, the duke said.

Ties between Japan and the UK date back to 1600 and the arrival of British sailor William Adams. Thirteen years later, the first British diplomatic mission came ashore from the Clove, an event that is being celebrated in both nations as Japan400.

The height of the bilateral military alliance, according to the duke, was between 1902 and 1923, including the years when the two nations fought alongside each other in World War I.

“Despite being on the other side of the world and being culturally quite different—differences I believe we should celebrate—there are many similarities between our nations, probably more than we would regularly recognise”, he said.

“Quite apart from our obvious differences, we are both island nations stuck close to significant continents, constitutional monarchies, historical maritime powers, established democracies—there are other things people seldom refer to”, he said.

“I refer to our special relationships with the US … also our belief in a globalised, free-market economy and our common interest in countering nuclear proliferation”.

The signing, in July, of the Information Security Agreement as well as the Defence Equipment Cooperation Framework marks the start of a new defence and security outlook for London and Tokyo, the duke suggested.

And, he emphasised, Britain’s commitment to freedom of navigation in the region is unflagging, despite resource constraints. He underlined that point by mentioning the Five Power Defence Arrangements and the presence of HMS Daring on maritime manoeuvres this year.

The duke also pointed out that, while both Britain and Japan each have a “special relationship” with the US, when it comes to defence, that does not preclude closer military ties between Tokyo and London.

He called on Japan to take advantage of Britain’s position as the most “globalised” of all the European powers.

Many of the duke’s comments had been touched on the previous day by Prime Minister Shinzo Abe when he addressed the conference.

Describing the bilateral relationship as “a natural a priori partnership”, Abe added that the Royal Navy and Japan’s Maritime Self-Defense Force “are joined through the mission we share, of maintaining the maritime order”.

“Of course, the United States remains our ever-unchanging primary cooperation partner”, he said.

“This is certainly also true for the United Kingdom. On that basis, I would like to state my eagerness for Japan and the UK to exchange knowledge and share experiences with each other, and to walk forward together as partners who jointly accept responsibility for world peace and stability”.

The conference was also attended by Sir John Scarlett, who spoke the following morning at the BCCJ breakfast event on UK–Japan Defence Collaboration.

Taking the microphone, Sir John vowed not to worry those attending—but then set about doing precisely that.

“Intelligence officers are, by definition, gloomy, and we are here to make people wary”, Sir John told the packed audience. “We are not optimists as professionals, even if we are in person. It’s the politicians who are the optimists”.

And, while he agreed we may be living in deeply troubling times, Sir John admitted that his tenure as director general of the Secret Intelligence Service (MI6) during the tumultuous period from 2004 to 2009 would have paled in comparison with the pressure felt by his predecessors in 1914 and 1940.

An intelligence officer for 38 years, Sir John’s background is in Cold War affairs, and he was in Russia when the Soviet Union collapsed.

He was also involved in democratic revolutions in South Africa and in the Balkan Wars. He had taken over the chairmanship of the British government’s Joint Intelligence Committee precisely six days before the 11 September attacks on the United States in 2011.

That “major cataclysmic event” changed forever the way in which intelligence, security and defence experts work, he said.
Terrorism has become a global threat and there is a newfound need to examine regional issues to see how they feed into the overall global security situation.

Sir John, who now acts as an advisor to a number of multinational firms, went on to examine some of the causes of the upheaval that has afflicted the Middle East and North Africa in recent years, including the on-going instability in Egypt and the civil war in Syria.

He concluded that “the region is full of risk”, and that Iran and its alleged efforts to acquire nuclear technology will remain the focus of Western attention for the foreseeable future.

Pakistan and Afghanistan remain unpredictable in southern Asia, while North Korea—whose “language and behaviour are becoming more extreme and bizarre”—and the tensions between Tokyo and Beijing are causes for concern in Japan’s immediate vicinity.

“China’s actions in the East China Sea are worrying”, he said. “There is an assumption in the international community that China and Japan will not allow the situation [around the Senkaku Islands] to get out of control, and that is probably true—but it’s difficult to be certain”.

Sir John took part in the chamber event with David Bullas, head of the Asia–Pacific region for the UK Trade & Investment team focusing on defence and security. Two British firms with a strong presence in those sectors, Rolls-Royce plc and BAE Systems plc, also participated.

Bullas underlined the importance of the recent agreements reached between the UK and Japan on closer cooperation in defence and security.

“We have for a long time supported firms in their relationships with Japanese industrial partners and the Self-Defense Forces”, Bullas said. “But now we feel this is a real window of opportunity to take that cooperation to a different level”.

And while the campaign to provide the Eurofighter Typhoon fighter plane to the Japanese military may have been unsuccessful, he said, the hard work that went into the bid demonstrated to Japan that “there is a really credible alternative” to simply purchasing US equipment, and that the UK–Japan partnership is on the cusp of tangible benefits to both sides.

That message was echoed by Richard Thornley, president of Rolls-Royce Japan Co., Ltd. His firm has developed alliances with six Japanese firms to build the hugely successful Trent aircraft engines, as well as turbines, heat exchangers and an array of other components.

The two nations’ complementary skills and knowledge should be used to their industries’ advantage, he added, saying that, while Japanese firms can bring cutting-edge materials, fuel efficiency, miniaturisation and other technologies to the table, Britain has been able to prove its systems and weapons in combat, and has experience meeting international customers’ requirements and putting forward competitive bids.

Christine Zeitz, president of north-east Asia operations for BAE Systems, used the example of the Eurofighter to drive home the point about teaming up to produce cutting-edge defence equipment.

The result of collaboration among the UK, Germany, Italy and Spain, the aircraft has been adopted by each of those nations and sold to Austria, Saudi Arabia and Oman.

France pulled out of the project at an early stage to focus its efforts on the Dassault Rafale. To date, no Rafale aircraft have been sold overseas, and total sales are just one-fifth of those of the Eurofighter.