Japanese corporations hold Welsh engineering and technological prowess in high esteem, while consumers in Japan are keen on the high-end, niche products that are increasingly emerging from Welsh firms.

And, judging from the consumption of Welsh ales and ciders at the 12 June British Embassy Tokyo reception, the Japanese have a soft spot for Welsh exports that come in kegs and bottles. 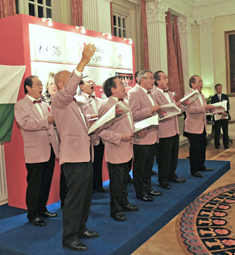 The Fujisawa Male Choir sang Welsh songs at the event.

The reception was held at the official residence of British Ambassador Tim Hitchens to mark a visit to Japan both by Edwina Hart, the Welsh government’s minister for Business, Enterprise, Technology & Science, and the Wales national rugby union team.


“There has been significant investment from Japan into Wales, with the first such investment back in 1972”, said Ambassador Hitchens. “And many of those early entrants are present there to this day”.

According to the ambassador, the three key attractions that draw Japanese to do business in Wales are the very warm Welsh welcome, the easy access to significant markets in the rest of the UK and in Europe, as well as the affordability of investing in Wales compared with other parts of the UK.

Standing beside the Welsh flag, Hart echoed the sentiments and underlined the importance of the “enduring and excellent relationship that has developed” between Japan and Wales. Hart and the rest of the Welsh government team were also keen to promote the eight firms that were taking part in the eight-day trade mission.

“Our aims can be summed up as [acquiring] more exports and more exporters”, Paul James, manager of International Trade Programmes and Contracts for the Welsh government, told BCCJ ACUMEN.

“There seems to be so much talk now about China and opportunities that might exist there, but we’re actually really trying to target Japan at the moment”, said James, who is on his third trade mission to Japan.

“We see this as a market with fantastic opportunities because there are more than 120mn people [in Japan], who are largely affluent and generally have pretty sophisticated tastes. The companies here like our technology and there is a business structure in place that is similar to what we have in the UK”, he explained.

“The last point is important because our companies can rest assured that deals and payments are going to be secure, while there is also protection of intellectual property rights in this country”.

Several of the firms that took part in the mission have experience in exporting to overseas markets in Europe or North America. Having got the hang of relatively straightforward markets that are closer to home, they are looking to stretch their wings in a more distant environment.

For the firms making their first foray into Japan, James’ team had arranged a series of introductory meetings with potential distributors or clients in their sectors. However, for the firms with some experience of doing businesses here, the task was more one of facilitating meetings with old clients, or building ties with new partners, he explained.

“I’ll be very pleased with any deals that are signed as a result of this mission, but we’re particularly looking for longer-term deals that will run over four or five years and keep these companies coming back”, he said. “The financial scale of the deal is less important right now than giving these companies a new string for their bow”.

One of the newcomers to the Japanese market was Clogau Gold of Wales Ltd. The “phenomenal” reaction the firm received when it recently started making its designs available on board Japan Airlines (JAL) flights indicates that there is a market here for its traditional and more contemporary designs.

“This is a fact-finding trip for me as I really needed to be here to experience the culture and to understand where we need to be aiming our brand in Japan”, said Aran Turner, manager of the firm’s international customer services.

The Clogau brand appeals to Japanese consumers because of its history and heritage, Turner said. Gold was first discovered in the Clogau Gold Mine in the hills of Snowdonia more than 150 years ago. The jewellery brand was founded in the early 1990s by the Roberts family to ensure that the gold still being excavated from Welsh mountains goes into fine handcrafted jewellery.

The firm won the Brand of the Year prize at the UK Jewellery Awards 2012. This, and the fact that the British Royal Family has been using Welsh gold for their wedding rings since 1923, are viewed most favourably by Japanese consumers.

“JAL customers certainly understood our brand and in the month that we [advertised on] the front cover of their in-flight sales magazine and had a double-page spread inside, we had one of our best sales months ever”, Turner said.

Aloha Telecommunications Ltd aimed to build bridges with Japanese firms in the data and telecom sector, while the chief executive officer of IQE plc, Dr Andrew Nelson, brought cutting-edge technology to Japan in the shape of advanced semiconductor wafers with a wide range of applications.

Meanwhile, Chepstow-based Reid Lifting Limited explored opportunities in Japan for its lightweight, portable lifting equipment. Its award-winning designs have proved popular across a wide range of industrial sectors, from construction to clean environments such as the Vatican.

“These are pioneering devices and this year we have won the Queen’s Award for Enterprise in two categories”, said Managing Director Nicholas Battersby.

“We have been around for a few years now and also sell [our products] in Europe. When I look at the market here, I see lots of potential”, Battersby said.

Meetings with distributors were positive while two potential end-users were “chomping at the bit” to put the systems to use.
“We can work with end-users from a distance, but we will definitely have to come back to work at the distributor level”, he said. “And we’re happy to do that as we start to consolidate relationships.

“I have high hopes for the Japanese market”, he added.

Experts in preservative chemicals used in the pharmaceutical and cosmetics industries, ISCA UK already works in other markets with some of the big names in Japan’s personal care sector, including Lion Corporation and Kao Corporation.

“We already have close ties with some of the very biggest companies in the industry and we hope that will translate into a presence and sales here in Japan”, Harris said. “We appreciate that it will be a long road but, once we have a foothold, we intend to be here for the long run”.

And that will probably mean opening an office to handle the Japanese side of the Newport-based firm’s operations, he said.

“That’s the sort of presence we want and I’m very optimistic about the market here for us”, he added.