Since 2002, the Foreign Chambers in Japan (FCIJ) has twice yearly conducted and published a survey of foreign business sentiment in Japan. The poll is designed to facilitate information exchange and to enhance activities for participating organisations.

The most recent survey—titled FCIJ Business Confidence Survey Fall 2017: Healthy Growth both for the Economy and Businesses—was conducted between 18 and 27 October. The respondents, from 17 foreign chambers of commerce in Japan, provided a total of 243 valid responses. The index used throughout this survey ranged from +2 (strong improvement) to -2 (strong decline).

Good mood
Respondents remain positive about the Japanese economy following the healthy growth noted in the survey conducted in October last year. Firms expect Japan’s economy to continue growing over the next six months, with the index displaying a rise to +0.67 from +0.40 in April. This is also shown in the 12-month forecast, which rose to +0.73 from +0.55.

The performance of firms reflected this economic buoyancy with both backward- and forward-looking indices showing improvement. Reported sales performance during the past six months grew to +0.77 from +0.70 in the poll earlier this year. Meanwhile, the sales forecast for the coming six months predicts a rise: from +0.87 to +0.93, the highest since April 2007.

That said, profitability growth slowed, having declined from +0.66 to +0.61 over the previous six months.

Nonetheless, the forecast index for the subsequent six months rose from +0.75 to +0.78, revealing the potential for minor improvement.

Going for growth
The majority of firms—62%—stated that the reason behind the changes in business performance were a result of their own efforts which, in turn, had determined their strategies.

Overseas firms are highly optimistic about business in Japan, as is reflected by the strong, positive growth of the various indices. Indeed, 81% of businesses are looking for further growth and 16% plan to maintain their current level of business. Only 2% indicated they plan to downsize, while one respondent was considering withdrawing from Japan.

Global impact
Respondents were asked to comment on a number of recent developments.

In terms of the Trans-Pacific Partnership-11 agreement, about which the remaining respondents were asked, just under half thought it would have no impact on them, while 41% anticipated a positive impact. Some 76% of this latter group of respondents do not expect changes in the North American Free Trade Agreement to affect their business in Japan.

Asked what the biggest challenges are in the Japanese market, the most cited issue, by a large margin, concerned labour, particularly the hiring and retaining of good staff.

Sales forecast for the next six months 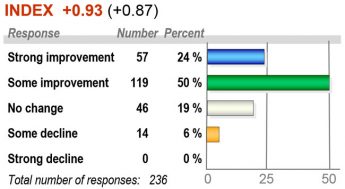 Firms positive but less upbeat than in last poll