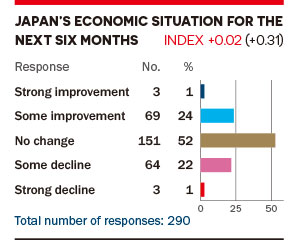 Results from a study, conducted by the Foreign Chambers in Japan (FCIJ), show dampened optimism regarding Japan’s economy.

Broken down by industry, the index for finance dropped significantly across question categories (Japan’s economy, past/future sales, past/future profitability). Many respondents cited yen exchange rate fluctuations as a primary influence on business, as well as global regulatory changes that have heavily influenced the financial services sector.

Profitability has been more stable than sales performance, however, with the past six months’ results showing a +0.01 rise since the previous survey. Some 58% of respondents attribute recent gains to their own efforts, several having focused on client retention and high-value offerings. But profitability forecasts for the coming six months reveal pessimism, with an index of +0.71 compared with +0.80 in the autumn survey. European firms present a more negative outlook than their US peers.

The spring survey includes two new questions, on childcare and pay raises. Childcare for working parents was cited as a recurring topic in 67% of responding firms. For local hires, 79% of firms said they would increase salaries by 1–6%, with 2.1% the average hike.

The biannual poll comprises responses from 17 local business organisations, with 61% of responses being from European chambers of commerce in Japan or business groups. Typically, a responding firm will have a Japan presence of more than 20 years, 40 employees, and an involvement in sales, trading or the service industry.

This survey is sponsored by Asian Tigers, Finnair and MOS Tax Corporation.

Feeling good about the future

But lack of staff is big worry