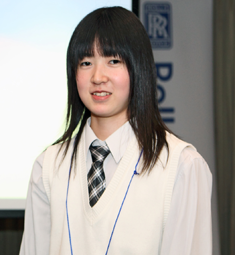 Chiho Ueno, of Soma High School in Fukushima Prefecture, was among the students at the workshop.

Thirty students and teachers from nine high schools in areas affected by the March 2011 earthquake and tsunami have taken part in a science workshop at Cambridge University, thanks in large part to support from firms such as Rolls-Royce Japan Co., Ltd and Barclays Bank PLC.

The students were given a research project to complete at the end of the five-day Young Scientist Workshop.

During their time abroad, they lived together at Murray Edwards College. The Japanese were partnered with British students who are also focusing on science, technology, engineering and maths in their studies.

Dr Eric Albone, director of the Clifton Scientific Trust, has been organising science workshops for young people from Japan and the UK since 2001. He has worked with schools in Kyoto since 2004 and the Tohoku region since 2011.

The goals of the programme, according to Albone, are fostering international ties and promoting valuable new skills in the sciences.

He said the projects had been “a tremendous challenge for the students, but also a lot of fun”.

“We do things on a shoestring, but we do the programme because it is so rewarding in terms of seeing how the students change”, Albone told BCCJ ACUMEN. “In just one week, they have been transformed”.

Over 100 students from the Tohoku region have participated in the four Cambridge workshops since 2011, with past projects including Tohoku-specific science subjects such as the effects of radiation.

The students are accompanied by their teachers who, while not taking part in the projects, return to their schools with new international experience to offer.

This year, students worked on projects involving 10 departments of the university.

One team, for example, worked in pharmacology and used electron force microscopy, while another focused on genetics and the study of chromosomes. Yet another team was assigned a chemistry project on gold and silver nanoparticles.

“The students were working in small teams with front-line scientists at Cambridge on real-life science projects, with the requirement to give a presentation on their findings at the end of the week”, he said.

Richard Thornley, president of Rolls-Royce Japan, said he was deeply impressed by the students’ achievements in such a brief amount of time, and by their ability to overcome linguistic and cultural differences.

“These projects involved some quite difficult research, and they had to give their presentations in both English and Japanese. So, I was really impressed by their level of understanding in a short space of time, and how they were able to work in multicultural and multinational teams”, Thornley said.

“Science and engineering make magic happen in the world”, he said. “We will continue to need talented scientists, researchers and engineers with unique and varied skills.

“That is why we are delighted to support the programme and we hope that the experience will benefit them throughout their careers”.

Rolls Royce—a partner of Japan’s IHI Corporation in Soma City—has a long history of supporting studies in the sciences.

The firm has been investing time and funds since former Chief Executive Officer Sir John Rose said there are only three ways to make a country wealthy: to dig something up, to grow something or to create something.

Barclays Japan has an ongoing programme for staff to volunteer in Tohoku communities.

Mitsubishi Electric Corporation and the Japan Science and Technology Agency also supported the workshop. It is expected that the students’ experiences during the project will encourage them to seriously consider studying in the UK in the future.

As well as carrying out research projects at Cambridge University, the students took part in pre-workshop activities organised in conjunction with the Rikkyo School in England, located just outside London.

Previous years’ workshops have also incorporated such a programme, which includes time for leisure and sightseeing.

The students visited the Royal Society (founded in 1660) and the Royal Institution (founded in 1799), both of which are dedicated to scientific education and fellowship.

They also went to University College London (UCL), where they gave presentations on their experiences in the aftermath of the Great East Japan Earthquake, to a packed audience comprising members of the general public.

This year, the university celebrates the 150th anniversary of the arrival of the Choshu Five, a group of students who defied the Japanese laws of 1863 to study abroad. At that time, interaction with foreign lands was restricted and it was illegal to leave the country.

On their eventual return to their home country, the five young men formed the core of a new government and led Japan’s transformation from an isolated state into one of the world’s most foremost technological powers.

One of the five students at UCL was Hirobumi Ito, the father of Japan’s Constitution and the first prime minister of post-Meiji era Japan.

Albone, of the Clifton Scientific Trust, said the continuation of this tradition of education exchange was deeply appreciated by both nations.

He added that he had received letters of gratitude in which students from the areas most affected by the tsunami and earthquake had said how much the study programme meant to them.

Chiho Ueno, a student at Soma High School in Fukushima Prefecture, was one of the 24 young people selected to take part in July’s workshop. She gave a moving speech at the send-off party, which was also hosted by Rolls-Royce.

“As you all know, the Great East Japan Earthquake occurred two-and-a-half years ago and many students’ families have been living in temporary housing since then”, Ueno said.

“Actually, I also live in temporary housing, as the nuclear disaster at Fukushima drove my family out of the home where we used to live”.

“When we were facing this terrible trouble, we received the heart-warming hospitality of the British people”, she said. “Your great consideration and support has brought us much hope. Thanks to your generous support, Japan has been recovering, little by little”.

The Clifton Scientific Trust is now planning the 2014 UK–Japan Young Scientist Workshop. It will, for the first time, take place at Tohoku University in Sendai, and there will also be a workshop in Cambridge for Kyoto schools.

For information on how to get involved, please contact Dr Albone at
eric.albone@clifton-scientific.org