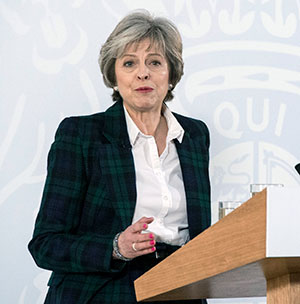 Prime Minister Theresa May has set out her Brexit objectives.

The new year got off to an inauspicious start for me. On New Year’s Eve, I paid my usual visit to our local shrine to exchange the lucky arrow that hangs above my front door. With the arrow exchanged and a quick prayer said for the health and safety of family and friends, I started to make my way home down the steep, dark steps of the shrine. Suddenly, I found myself rolling down them.

I have no idea how I lost my footing. Drink had been consumed, but not to excess. No bones were broken, thank goodness, but I scraped and bruised myself in an astonishing number of places.

People were very helpful—someone even called an ambulance, which I didn’t need. But here’s a strange thing: I made the short walk home more in shock than in pain and no sooner had I arrived than there was a ring at the door. Who could this be after midnight? It was the ambulance crew checking on whether I was all right. How on earth did they know where I lived?

Three weeks later, I found myself in the emergency room at the hospital where I’d had my by-pass surgery wired up to monitors and a drip after suffering from an irregular heart beat—another chance to remind myself how fortunate I have been with medical services here.

And now we find ourselves in the Year of the Rooster, according to the lunar calendar, which looks set to bring its own difficulties and challenges. It began on 28 January and promises to be altogether different from what preceded it: the Year of the Monkey.

Already we have seen some of the new challenges play out with the inauguration of the 45th president of the United States, Donald Trump. His inaugural address made for depressing reading with its dark echoes of the 1930s. Equally depressing were the mendacious claims that the inaugural audience was the biggest ever, despite photographic evidence that the National Mall was half empty. Indeed, the protests that followed the inauguration drew far bigger crowds. Yet Trump and his team seem incapable of avoiding self-aggrandisement.

On the opposite side of the Atlantic, Brexit continues to dominate the headlines. In January, Prime Minister Theresa May delivered a speech in which she set out her vision of what has been dubbed a “hard Brexit”. She made it clear that Britain will quit the single market when it leaves the European Union (EU).

There have been suggestions, from some quarters, that the UK could enter into some kind of arrangement allowing membership of the single market without belonging to the EU, but May has poured cold water on that idea. Her speech received a mixed reception from other political leaders in Europe, and she also faces dissent in the UK itself.

This is particularly true in Scotland, which voted overwhelm-ingly to remain in the EU in the June referendum. Nicola Sturgeon, Scotland’s first minister, has even raised the prospect of a new referendum on independence. Scottish voters rejected this idea in 2014, but the outcome might be quite different were another vote to be held in the wake of Brexit.

Then there is the matter of the timetable. May is still confident that she can trigger the start of formal Brexit talks in March. Invoking Article 50 then would see the start of two years of negotiations—a period some other European leaders believe is ambitious.

Throughout all this, Japan is watching carefully both Washington DC and the UK. In both cases, the stakes are high. Prime Minister Shinzo Abe must take comfort from the announcement that the US would come to Japan’s defence were the Senkaku Islands invaded by China, which also claims them. But his administration is unsure of what Brexit will mean for the significant number of Japanese investors in the UK, where already the financial industry is pushing ahead with plans to relocate some business operations elsewhere in Europe.