When then-Japanese Prime Minister Shinzo Abe announced on 28 August that he would be stepping down for health reasons, GR Japan was ready with a detailed briefing for its clients. In the brief, the government relations firm indicated that Chief Cabinet Secretary Yoshihide Suga was best placed to succeed Abe and outlined the significance of those developments for businesses and operations in Japan. When Suga was appointed prime minister on 14 September, GR Japan issued another client brief mapping out the changes in and implications of the new admin­istration’s policy direction.

Providing such insights and helping clients to act on them is now routine for GR Japan’s co-founders, Jakob Edberg and Philip Howard. By combining their experience in Japanese policy, politics and government—Edberg is a former policy director at the European Business Council and Howard a former diplomat in the polit­ical section of the British Embassy Tokyo—the duo have built GR Japan into the leading and largest government relations firm in Japan. 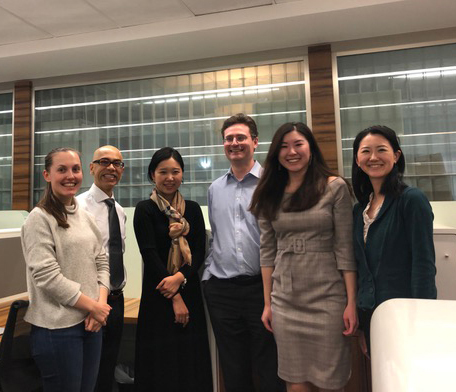 Members of the GR Group in the London office

The GR Group team now numbers about 70, including former members of the House of Representatives, former ministry officials, and others with first-hand experience in government and policymaking. This is the key to the effective­ness of the firm’s advocacy—the team’s direct expe­rience with and knowledge of Japan’s political machinery, including national and local policy­making processes, combined with sector special­isation and business acumen.

Fifty members of the GR Japan team work from its flagship Tokyo office, located near the Diet Building and the Prime Minister’s Office in Nagatacho. The firm also has offices in Osaka, London, Washington, DC and Seoul, making it one of the largest government relations con­sultancies in the Asia–Pacific region. UK and European clients are supported by a bilingual team of five in the London office.

This year, the firm celebrated its 10-year anniversary. Over those years, GR Japan has steadily built up connections throughout the upper echelons of Japanese politics, with ministers, vice-ministers and party leaders frequently taking time out to discuss topical issues and speak at its events.

Most recently, former Japanese Deputy Foreign Minister Koji Tsuruoka, Japan’s Ambassador to the UK from April 2016 to last November, joined the GR Japan team as senior adviser. Ambassador Tsuruoka was one of several experts participating in a recent webinar of the GR Group’s International Policy Forum, held two days after the selection of the first Suga Cabinet, at which the implications of the political changes for different areas of policy and business were analysed.

As Edberg, the firm’s chief executive, explained, “GR Japan’s expertise is in government decision-making, so our work naturally covers a wide range of sectors, including healthcare, energy and envi­ronment, and IT, to name a few”.

The firm is also retained by industry associ­ations, major international foundations and non-governmental organisations, as well as national and regional governments. Recently completed is a three-year public diplomacy pro­ject to increase understanding of the Japan–EU Economic Partnership Agreement among Japanese stakeholder groups, including policymakers, local governments and affected industries.

There may be many changes ahead for Japanese politics, but the GR Group knows what it wants to achieve. “We have a vision, warmly embraced by our colleagues, to be the best government relations firm in the world,” said Managing Director Philip Howard in an interview with ACUMEN. “We aspire to be the best at what we do, using our expertise and experience to help clients achieve their goals”.