Although its Tokyo headquarters sustained only minor damage from the earthquake and tsunami of 11 March 2011, GSK quickly realised that many others were considerably less fortunate. After first confirming that all employees were safe and determining the amount of damage, the focus turned to helping those most in need.

During the week after the quake, dozens of staff offered to help. The first bus of volunteers left company headquarters on 18 March, manned by 20 people—including medical doctors—and loaded with emergency bottled water, food, torches, blankets, stoves and batteries.

Due to their distinctively coloured jackets, the volunteers were soon dubbed Team Orange, as they provided evacuees with relief supplies, food kitchens, cleaning services and moral support.

The firm responded by rewarding volunteers with Orange Week: staff who had participated in recovery efforts were granted five days of paid holiday. 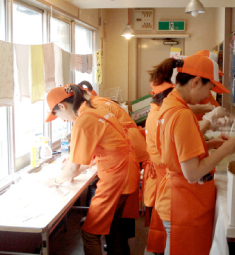 Fauchet visited Sendai and Koriyama to help relocate staff and their families, meet stakeholders and deliver items to companies and hospitals.

“After the earthquake, we spent five weeks in an unusual environment, and people discovered that, together, they could do the things that were being asked of them, that they were stronger together, and that we were all working together, all pulling in the same direction and all working for Japan”, said Fauchet.

In collaboration with the Japanese Red Cross Society, national government authorities and other organisations, GSK launched a project to provide mental and physical health services to residents of temporary housing.

“Kokoro no kizuna” (Knot of the Heart) also offers health consultation services by doctors and other specialists at evacuation facilities across the affected region. Just after the disaster, one of the first drugs urgently required was used to treat a rare and particular form of hypertension. As land transport was badly damaged, GSK chartered a helicopter to deliver the drug to hospitals in affected areas, while salespeople delivered other vital drugs throughout the region.

With power shortages in mind, GSK introduced another innovative plan that resulted in reducing energy at factories and offices nationwide, by an average of 36.8% from July to September, compared with the same period in 2010.

Money saved by this initiative will help fund more than 30 scholarships for Tohoku students to major in pharmacy.

Even as the urgency of shortages lessened, Team Orange kept going by planting flowers on a damaged road in Miyagi Prefecture, to help residents prepare for the annual Flower Festival. And in October, 149 employees of GSK’s Imaichi factory participated in three volunteer projects locally and in Tohoku.

So far, GSK has donated about ¥250mn in cash, ¥270mn worth of medical and healthcare products, and items such as trailer houses for temporary clinics valued at ¥30mn. GSK’s efforts continued in December with donations of blankets and other such items to help those in temporary housing beat the cold. The donations from GSK employees will buy 400 boxes of food which will be delivered to affected areas in Tohoku from 11 March.

GSK will also continue working to support affected areas and carry out activities to help communities, with the aim of developing society and improving the quality of life for people in Japan, not just through its products, but also through these community activities.