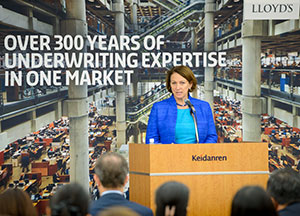 “An inclusive workplace, where the only hierarchy is the hierarchy of ideas, is the very foundation for the innovation we need as the world changes like never before”.

This was the recipe for growth and prosperity brought to executives of the Keidanren (Japan Business Federation) by Inga Beale, chief executive of Lloyd’s of London—the world’s only specialist insurer and reinsurer—at a keynote speech on 25 September.

Beale, the first woman in the role in the 327-year history of the firm, was in Tokyo to speak about the advantages to the workplace of diversity and inclusion, particularly the promotion of women.

Fostering business success through innovation is a core part of Lloyd’s corporate ethic, not least in its work in Japan, where it is a major supplier of reinsurance capacity to the domestic market, as well as a growing provider of local policies for specialist commercial risks.

Since 2013, the firm has branched out from its successful reinsurance business to provide warranty and indemnity to Japanese businesses that support domestic and cross-border M&A transactions.

“We bring the whole expertise of the Lloyd’s market in London and all those syndicates who specialise in different things and have done for many years”, said Iain Ferguson, president of Lloyd’s Japan Inc.

“A Japanese company that is struggling to find the specialist insurance cover it needs to protect and support its business ventures at home and overseas would do well to talk to Lloyd’s”.

“Lloyd’s has had a long and proud presence in Japan”, said Beale, the first Lloyd’s agent in the country having been appointed in 1868.

Today, the three dominant Japanese insurers—Sompo Japan Nipponkoa Insurance Inc., Tokio Marine Group and MS&AD Holdings—own more than 16% of the Lloyd’s market: the term given to the network of underwriting businesses operating under the Lloyd’s umbrella.

Lloyd’s has always specialised in pioneering policies, providing the first cover for earthquakes, satellites and the initial aeroplane take-off. It was the first insurer to develop a policy for cyber attacks, and it now covers 15% of the global market for cyber insurance, with 42 Lloyd’s syndicates writing cyber products.

The organisation’s multi-layered structure spreads risk, thereby allowing syndicates to support unusual ventures and giving entrepreneurs the economic protection they need to take a calculated risk. Each syndicate has its own capital, provided by parent firms or external investors, including individuals and private equity. The system is further underwritten by a central mutual fund. This reinforced structure “has a critical part to play in innovation and risk-taking”, according to Beale.

“Lloyd’s quantifies risks on new technology and puts a price on those risks”, she added. “For example, Tokio Marine, leveraging the expertise of its Lloyd’s syndicate named Tokio Marine Kiln, has just introduced standalone drone insurance to the Japan market”.

Lloyd’s stands ready to support Japanese innovation, yet, Beale said, new ideas only “spark” when diverse points of view and experience are given equal value in the workplace.

She cited a 2013 report by the Center for Talent Innovation, Inc. in the US that found publicly traded firms, which have two-dimensional diversity (employees with differing perspectives and additional skills, such as languages), “were 70% more likely to have captured a new market”.

So, diversity sparks creativity, which fosters innovation and growth. Yet, in Japan, women hold just 8% of leadership positions, according to the consultancy Grant Thornton.

“A staggering 66% of Japanese businesses have no women at all in the senior leadership teams”, said Beale, noting that, during her time in Japan, she had only had meetings with men.

“Japan needs educated women to stay in work after they have children”, she said, citing figures from the International Monetary Fund that show Japan could increase its gross domestic product 8% “if female workforce participation hits the same levels as in northern Europe”.

The answer is not to meet diversity targets simply by padding the boardroom with non-executive directors, as is commonplace in the UK, according to Beale. “The real benefit is when a business starts treating those women as equals, when you have an inclusive, not just a diverse, workplace”, she said.

Women must have the confidence to speak out at work, she added, advising female employees to “believe in your ability and be confident. If you know you are good at your job, own it”.

According to Beale, inclusivity is the cornerstone of corporate success. In Japan, global diversification is a well-established business model, as firms expand into new markets overseas. Lloyd’s provides specialist risk management solutions to support this process, including “warranty and indemnity, political risks and trade credit, and various other specialist covers”, said Ferguson.

“The Lloyd’s market writes business from over 200 countries and territories worldwide, so we are well placed to assist Japanese corporates when they do business around the globe. We offer that unique mix of specialist expertise and geographical spread”, he added.

In an ultra-competitive globalised economy, inclusion is the “foundation of the innovation that Japan will need to stay ahead of the rest”, Beale said.

Most residents of Tokyo assume that the greatest risk to the city comes from earthquakes or tsunami. However, new research by the Cambridge Centre for Risk Studies at the University of Cambridge Judge Business School shows that typhoons, a stock market crash or an oil price shock are even greater threats to the economy of the world’s largest urban area.

The research, commissioned by Lloyd’s, analyses, for the first time, the potential impact of major risks on the economic output of 301 of the world’s major cities.

An increasing part of Lloyd’s business is the calculation of fast-changing emerging risks, resulting from globalisation and rapid urbanisation radically altering the way we live our lives.

As wealth becomes ever more concentrated in vast mega-cities, our economies become more exposed to the impacts of both man-made and natural disasters. The Lloyd’s index cites the sub-prime mortgage crisis, Hurricane Katrina and the Great East Japan Earthquake as examples.

Ranking second in the index behind Taipei is Tokyo, where the amount of GDP at risk is calculated to be £100.7bn.

“An estimated 11% of the average annual GDP of Japan’s 13 largest economic centres is at risk in the coming decade”, said Beale. “Through this leading research we want to raise awareness of potential and emerging risks. Businesses and governments, together with insurers, must work together to ensure that this exposure—and the potential for losses—is reduced”.

A range of specialist covers also is offered, including, but not limited to, terrorism, political risks & trade credit, contingency, and warranty & indemnity. To find out more, contact the bilingual team at Lloyd’s Japan Inc.