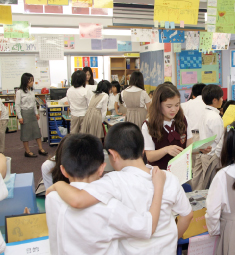 Wide choice for expats and locals

While concerns surrounding last year’s disasters in Tohoku and the current economic climate linger, expatriate parents in Japan face a perennial cause of anxiety: where to send the children to school.

Fortunately, there are a number of international schools offering curriculums and teaching standards that differ little from those at home, while support networks ensure the overseas educational experience is not a stressful one.

The British School in Tokyo (BST) operates two sites in Japan’s capital and prides itself on providing a world-class British education for English-speaking students of Tokyo’s international community.

While some BST students left following the disasters in March 2011, not only have they all returned but the school is set to welcome a record number of students—about 700—this September.

“Our student numbers fell by about 5% after last year’s disaster, but had recovered fully by the following September”, said BST’s Simon Lloyd. “Numbers this September will be the most we have ever had”.

The school—recently given an overall “excellent” rating by the Independent Schools Inspectorate, the organisation responsible for inspecting independent schools in the UK—in September will welcome as its new head David Christian, former principal of St Joseph’s International School in Singapore.

“Some parents choose BST because we offer a British education and follow the English National Curriculum, but many others choose us because we have very high academic standards”, he said. BST uses a database tracking system to ensure that the academic progress of every child between the ages of three and 18 is constantly monitored. “We work extremely hard to ensure that we recruit teaching staff of the highest calibre, and that their knowledge is kept relevant and up to date with regular trips to the UK for further training”, he added.

Founded in 1924, the Yokohama International School (YIS) is the world’s second-oldest educational establishment with “international school” in its name. The annual student intake is about 650 from more than 40 countries, with teaching staff representing 15 nationalities.

The school launched its Connected Learning Community initiative last year, incorporating a laptop programme for secondary-level students that aims to provide them with non-stop computing and network access on a common learning platform. The YIS also offers a Global Citizen Diploma to fully acknowledge graduates’ wide-ranging achievements, both inside and outside the classroom.

“We provide a solid academic programme—which is borne out by test scores consistently above global averages—but at the same time we emphasise the importance of balance in students’ lives”, said James MacDonald, head of school. “They are involved in a myriad of activities from sport and fine arts to community service.

“Additionally, we have an active Parent-Teacher-Student Association which, among other activities, has a mentor programme that matches families new to Japan with current ones to help them get acclimatised”.

Makuhari International School in Chiba Prefecture has recently entered its fourth year of operation, and expects to welcome 295 students in September, about 10% more than last year when some families—expats and locals—chose to leave Japan following the triple disaster.

“Some 22 nationalities are represented here, but our biggest percentage of students are Japanese returnees”, said Head of School Paul Rogers. “Our school was designed and planned for those who want the Japanese-style curriculum, but conducted in English and with an international feel”.

The institution provides education for children aged between three and 12 and, because students follow the Japanese curriculum, they have the option of entering a Japanese public high school or an international school, Rogers said.

Although its aim has always been mainly to serve the expatriate community, the Nagoya International School, which opened in 1964, has also seen a rise in the number of returnees and non-expat foreigners in recent years, according to the Director of Development Erik Olson-Kikuchi.

“The number of expatriate students has steadily risen and is expected to continue climbing due, in large part, to the expanding manufacturing industries and automotive sector in Nagoya”, said Olson-Kikuchi, adding that the school’s current intake is about 330 students from 32 countries. “The growth of Nagoya’s corporate sector has led to an influx of nationalities to the region”, he explained.

Enrolment has been climbing slowly since March last year, he added. “Fukushima has had no negative impact, in fact we have had an increase of enquiries from families wishing to leave the Tokyo area”, he said.

Although it only recently implemented the International Baccalaureate (IB) Diploma Programme in its senior school, the school already has achieved scores above the global average, Olson-Kikuchi said. “We also have just obtained an additional accreditation from the Council of International Schools, which reflects the continued internationalisation of Nagoya”, he added.

The Tokyo International School (TIS) this year boasts an intake of 330 students between the ages of four and 14, representing 54 nationalities—an incredible development since its inception 15 years ago. Founded in 1997 by international parents who wanted quality education for their children, TIS initially comprised just one 12-student class.

This expansion means that TIS will relocate to a new campus in the Tokyo suburb of Minami-Azabu in August next year. “As the school grew, different features, such as the IB Programme and our holistic approach to study started attracting different types of families”, said Aya Suzuki from TIS, before adding that, while the school may be relocating, its basic aim to nurture confident, open-minded, globally oriented and independent thinkers remains unchanged.

To instill such values, language education is naturally a prominent feature at the school; Japanese is taught in each class and Spanish is taught in middle school, Suzuki explained.

Language education is also a prominent feature in Toshima ward’s New International School of Japan (NISJ). Opened in 2001 with school entry offered to those aged between three and 15, it is the only international school in Japan that is fully bilingual in all subject areas. “The ‘new’ in our name is due to the style of school, not its age”, clarified Head of School Steven Parr.

Innovation is at the heart of its raison d’être; all NISJ students learn to play the violin using the Suzuki method (by ear) from elementary-level, and over half choose to study Mandarin Chinese.

“The school is child-centred and developmentally based, with no fixed goals by grade level”, said Parr. “Therefore, there is no limit as to how far a child may go in any particular area”.

Popular with parents because their children become bilingual, the school has a 23,000-volume library, PCs and interactive whiteboards in every classroom, and two form teachers in charge of fewer than 20 children.

Each year, about 120 students from 27 countries go through the YIS curriculum, which is based on the IB Primary Years Programme, the UK National Curriculum Key Stage 1 and Early Years Foundation Stage, as well as some US state education guidelines.

“We are committed to staying vigilant to maintain the highest quality and standards in education, safety and ethics”, said school head Yuko Muir. “We are constantly updating our curriculum based on continuing research of the best international practices”.