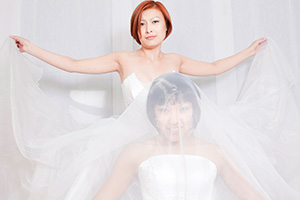 On 26 June, almost 42 years to the day after a riot at the Stonewall Inn in New York heralded what would become the gay rights movement, the US Supreme Court ruled that states across the nation could not ban same-sex marriage.

Opinion was divided (5–4 in favour), but sufficient to create a new human right and clear the way for hundreds, or perhaps thousands, of couples to embrace what Justice Anthony Kennedy, writing for the majority, said was a union that “embodies the highest ideals of love, fidelity, devotion, sacrifice and family”.

The ruling made news around the world, including here in Japan, where activists in the lesbian, gay, bisexual and transgender (LGBT) communities expressed the hope that it might encourage officials here to consider similar moves.

It also led to an unprecedented filing by almost 500 individuals in July with the Japan Federation of Bar Associations requesting the legalisation of same-sex marriages and claiming that Japan’s refusal to comply constitutes a violation of human rights.

The petition claims that the country’s failure to recognise same-sex marriage is also unconstitutional as it contradicts the principle of equality and individual dignity.

This lack of recognition, the petitioners claim, “exposes couples to a wide variety of disadvantages in life, thus robbing them of the right to pursue happiness as stipulated in the constitution”.

Some of the complaints cited in this regard include discrimination by landlords who refuse to let to same-sex couples, the denial of visitation rights in hospitals, and the refusal by some social and athletic clubs to accept partners in “family benefits schemes”. There is also the vexed question of inheritance rights.

Certain local authorities have begun looking at these issues. While none to date have broached the subject of marriage per se, some are considering measures that are “gay friendly”.

In March, for example, Shibuya Ward became the first local government in Japan to adopt an ordinance establishing same-sex partnership certificates. In July, Setagaya Ward announced that it, too, would start issuing certificates in the autumn.

These are steps in the right direction, but the certificates are not legally binding, so just how effective can they actually be? Other local authorities such as Yokohama City and Takarazuka City, in Hyogo Prefecture, have also spoken of measures to protect the rights of same-sex couples.

Meanwhile, same-sex marriage is a reality in the UK—except Northern Ireland, where the executive has stated that it does not intend to legislate for the practice.

Being a devolved issue, differences exist in legislation and timing, but politicians have been quick to put in place measures permitting same-sex marriage.

The Marriage (Scotland) Act 1977 and The Marriage (Northern Ireland) Order 2003 stated there was a legal impediment to marriage if the partners were of the same sex. Yet, just a decade after the latter, Queen Elizabeth gave royal assent to the Marriage (Same Sex Couples) Act 2013, which legalised same-sex marriage in England and Wales. One year later, in 2014, Scotland legalised the practice.

There will be many in Japan who are watching developments carefully and hoping that changes in legislation here can be made with similar speed. So far, the government opposition parties have largely welcomed the moves towards easing restrictions while, not surprisingly, the Liberal Democratic Party has voted against any such freedoms.