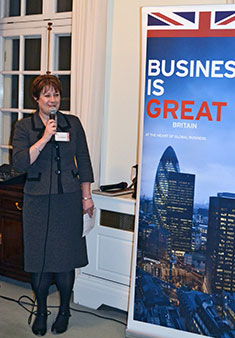 Before Damon Hill arrived in Tokyo in February, he admits his expectations for his initial foray into the Japanese market for the Barney & Taylor clothing brand were “quite low”.


Four days after touching down, he was taking a breather from a whirlwind of meetings with distributors and retailers, all apparently eager to stock the Manchester-based firm’s high-end leather clothing and accessories.

“I was always under the impression that it would take years to get business relationships in this market to bloom”, Hill told BCCJ ACUMEN. “I was worried that we are not known in Japan, that it would take time to build the trust required and so on.

“But I’ve found there is a strong appetite for what we do”, he said. “People here are very well turned out; they have an impeccable sense of style—and that fits in neatly with what we want to do.

“The companies we have been talking to here are very keen and, from my point of view, the mission could not have gone better”.

Within a matter of weeks, the visit to Japan paid off spectacularly.

“We have just signed a partnership with a Japanese company called Junichi, who we met on the mission, to be our representative in Japan”, Hill said.

“Junichi bring with them a great understanding of the Japanese marketplace and consumers, and they will act as a bridge between us and a distributor”, he said. “Basically, Junichi have become an extended arm of our own company in Japan”.

Barney & Taylor are still looking for the ideal distributor in Japan, but Hill believes the arrangement with Junichi K.K. will allow the company to identify and attain the “right level of distribution, which can be so difficult from afar”.

“Local intelligence is a powerful thing, so we are hoping that this partnership helps to secure a foothold and plant our foundations in Japan”, he said.

Barney & Taylor was one of 10 firms taking part in the seven-day UK Trade & Investment (UKTI) mission, organised by the trade teams representing north-western and eastern England.

David Moir, mission manager for east England delegates, was keen to dispel a few myths about doing business in Japan.

“There is still a strong sense that this is a tough market and that Japan works hard to keep companies out”, Moir said.

“We need to overcome the perception that it’s difficult to get into Japan, and to show firms just how rewarding the market can be once it has been cracked”, he said. “That is especially true in certain areas, such as high-end fashion, where British firms have a very good reputation”.

Of the businesses taking part, only two had previously sent representatives to Japan.

“The businesses that have come are at different stages in their development, in particular in their relationships with companies here in Japan”, said Peter Thompson, UKTI international trade adviser for the north-west of Britain.

“Some are just starting out and have come for more of a look-and-see; others are developing existing contacts; while some are trying to develop the business they already have”, Thompson said.

Working with the UKTI Japan team at the British Embassy Tokyo, trade officials were able to set up meetings with potential partners, distributors and even clients. Hertfordshire-based Flat Technologies Ltd., one of the participating firms, also used the opportunity to take part in a trade show.

“This is a very sophisticated market, but it is quality through and through”, Thompson said. “Our companies find that, once they have gone through the courting process, the marriage will be long-lasting”.

Another member of the mission delighted to discover that his worries about operating in Japan were unfounded was Andrew Lau, business unit director for Scientia Ltd.

“We have been able to talk with many universities and partners that work with universities, and the feedback has been very good”, Lau said. His Cambridge-based firm is the market leader in resource scheduling, space management and timetabling solutions for the government, higher education and the private sector worldwide.

Scientia’s Syllabus Plus suite of software tools, along with its smart timetabling and scheduling software, has already been translated into 17 languages and is sold in 32 countries. Lau holds high hopes for the Japanese market.

“It is early days still, but I do believe that coming here and meeting people face to face will lead to new opportunities for us”, he said.

During his time in Japan, Lau also flew to Naha for a meeting with key representatives of Okinawa University.

“This is the sort of thing that simply cannot be done over the phone”, he said. “It’s all about making the effort to explain the advantages of our solutions in person, and I’m confident that what we are able to provide will help to overcome some of the problems that institutions here are facing”.

Progress in forging new contacts had been so swift that Lau returned to Japan in March for a further series of discussions with interested potential customers, which has led to progress.

“We are currently in some late-stage discussions with a well known solutions provider for the higher education sector in Japan and hope to finalise a partnership deal very soon”, he added.

Dr Hamid Hashemi, director of education experts Mayfair Consultants, also had reason for optimism as a result of his first trip to Japan; he had secured his first contract within 36 hours of arriving.

“I see huge potential here”, Hashemi said. “I would say that education is one of the UK’s greatest assets and a source of pride for me personally, but there are very few British companies in the education sector here—which makes it even more attractive”.