But not for whistleblowing boss-turned-benefactor Michael Woodford

Michael Woodford grew up in Liverpool and joined Olympus Corporation as a medical equipment salesman. He rose swiftly through the ranks to head the firm’s UK and European operations before being appointed president and chief operating officer in April 2011.

The first Western “salaryman” to become the leader of a giant Japanese corporation, he was named chief executive officer in October of the same year.

Two weeks later, Woodford was fired. He had been asking questions about nearly $2bn in payments to three minor, “Mickey Mouse” businesses, and fees that were supposedly paid for advice on mergers and acquisitions. The Olympus board of directors could simply not give him an answer. 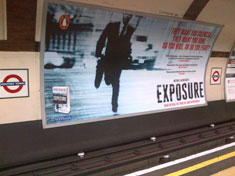 Woodford’s best-selling novel is promoted in a London tube station.

After the full story of Woodford’s bravery and whistleblowing activities came to light, The Sunday Times, The Independent and The Sun all recognised him as 2011 business person of the year.

In March 2012, he was named Person of the Year at the FT ArcelorMittal Boldness in Business Awards. This was the first time in history that four national newspapers all chose to honour the same individual.

In 2012, he published Exposure: Inside the Olympus Scandal, and a screenplay for the film version of his experiences is currently being developed by Film4.

Woodford, 53, lives in London with his Spanish wife, Nuncy, and their two children.

How has your life changed, both personally and professionally, since the Olympus scandal came to light?

Totally. I now spend my time speaking around the world, as I care passionately about sharing the lessons of the Olympus scandal and dedicating my time to my human rights and road safety charities. I’m busier than ever before!

In what way have those activities been coloured by your experiences at Olympus?

I have a more jaundiced view of human nature. Experience has taught me that most people only care for themselves and their immediate families and won’t get involved in things that are “difficult”.

But that also makes me feel thankful for the few people who did help me. I want to give back now, with my time and money, to help those in desperate need. In each of the last two years, I have given away a seven-figure sum to the charities that I support because that is what I care about.

I have been offered two board-level jobs, but that is not what I want to do any more. Life is too short. I did want it at the time [when I was at Olympus], but I don’t want to do it again. I have realised that the world is a big and interesting place and I don’t want to live by the confines of corporate life.

What changes have taken place in Japan as a result of the Olympus case?

Nothing has changed in Japan. I find the secrecy law that Prime Minister [Shinzo] Abe has passed profoundly disturbing. One cannot say that things will never change, but the behaviours of blind obedience and deference are deeply ingrained within corporate Japan.

I think it’s an issue for Japanese society. Japan is still very closed in its attitude toward the rest of the world and change cannot come from outside; it has to come from within.

Young people in Japan need to be promoted not based on a hierarchical system, but on ability and talent. There should be more opportunities for women. Right now, there seems to be a lot of rhetoric but nothing meaningful is happening.

In my opinion, Abenomics is just creating an asset bubble. There needs to be independence, a freedom of the spirit and a meritocracy, but change has to come from within.

What influence do you think Japan’s corporate culture and media had on the Olympus scandal and breaking the story?

Huge. I once asked a senior Japanese financial journalist what would have happened if I had given him the file that I gave to Jonathan Soble of the Financial Times. He smiled and said his editor would never have allowed him to write the story.

In the early weeks of the scandal, much of the Japanese media acted like they were the press office of Olympus. This is something I find desperately worrying when, in any society, there exists a powerful need to be held accountable.

If Japan goes the other way, such as with this secrecy law, then it will just make whistleblowers and journalists even more uncomfortable.

A free press—that is what matters most. It still shocks me that none of the mainstream media picked up the original story in FACTA [the Japanese economic monthly that first exposed inconsistencies in Olympus’ accounting]. That tells you everything you need to know about the relationship between the media and the powerful in Japan.

You are advocating more protection for whistleblowers, even compensation. Has there been any progress on this front?

I have been consumed by my membership of the Whistleblowing Commission, which issued a report on the issue on 27 November.

I was the president of a large multinational corporation, which made it much more likely that people would actually listen to me, but the real concern is how you make it easier to come forward in reporting wrong-doing for, say, a junior management accountant with three children and a big mortgage.

The commission’s work has been acknowledged as the UK’s most comprehensive review to date of whistleblowing policies and practices, and it calls upon the secretary of state to issue a code of practice to be adopted in all UK workplaces. Off-the-record discussions with ministers suggest that the government will be extremely receptive to the report’s findings.

Are you confident the commission’s efforts will genuinely protect whistleblowers in the future?

I believe most reasonable people will accept that whistleblowing is something to be nurtured, in that it can facilitate the early detection and prevention of wrongdoing.

After experiencing my life spiralling out of control, with the fear of losing everything, my motivation now is simply a desire to share the lessons of the Olympus scandal as widely as I possibly can, and in doing so to make people think, and hopefully make it a little easier for the next person who needs to blow the whistle.

Whilst Britain can clearly do better, it already has some of the best protection in the world for whistleblowing, and what I’m doing with the UK commission sadly won’t help anybody in similar circumstances in Japan.

Do you have any advice for potential whistleblowers who want to avoid the spotlight?

To be honest, if they are in a junior position in a Japanese company, then given the way that the law and society is, I would not advise them to do it. My experiences have made me sceptical and cynical.

If they are more senior, then I would, but they need to make sure that their voice is heard and that would mean talking to FACTA and the press from outside Japan.

What kind of reception have you received in the business world since moving back to the UK?

Many of the world’s largest companies now employ me as a consultant, to advise them on how not to let the same thing happen in their corporation. That is interesting to me, as I want to bring about change.

They have to demonstrate that they have a whistleblower line that is both independent of the executives and is known about by the people who work for the organisation.

One company in Japan even asked me to work for them, which was a positive surprise. But I suppose there will always be mavericks and independently minded people everywhere.

What is the status of the book and how is the film coming along?

The book is already a best-seller. It is being translated into Chinese and the German edition comes out in March. The movie is in development with The Ink Factory, a film production company set up by the sons of author John Le Carre, along with Film4, and there are rumours that Colin Firth is interested in the lead role!

Do you plan to come back to Japan? Would you feel any legal, physical or other threat if you did?

I have already been back five times since I was fired because I miss Japan. I have a strong affection for the country and its people.

I use the word “love” very carefully, but I really do love the Japanese people, and that feeling has only grown since I was dismissed, as it was the men and women on the street who touched and moved me. I don’t feel there is any great risk now, and I will definitely return to Japan.