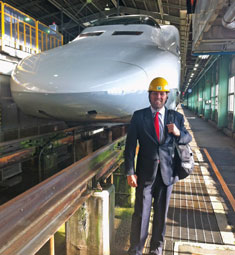 Spencer Dando has been working closely with Japanese railway firms.

The firm—based, coincidentally, in Newcastle upon Tyne—has already made significant inroads.

Established in 2002 and now employing more than 220 people around the world, the firm has developed wireless solutions that improve the connectivity of both trains and buses, giving passengers access to more reliable internet connections, media entertainment and real-time information while they are on the move.

There are also major benefits for firms that operate trains and buses, pointed out Spencer Dando, the firm’s regional director for the Middle East, Africa and Asia, as Nomad’s expertise gives them improved vehicle safety, increased efficiency and vehicle monitoring and maintenance.

“We have been working with Hitachi Rail Europe for a while and the first deal has just been announced”, said Dando, referring to the deal for Nomad Digital to provide an on-board server solution for the fleet of Hitachi Super Express trains that will make up the Intercity Express Programme and for Hitachi’s existing fleet of trains that operate on the high-speed line south of London.

“The Department of Trade and Industry invited us to speak in Japan, and from there interest developed”, he explained. “Japan remains one of the largest rail markets that is currently untapped by our solutions, while India, China and Russia are the others.

“With Japan being a world leader in technology and one of the largest markets for connectivity, we believe [the country provides] a very good opportunity for us”.

Dando estimates the firm, which controls 60% of the world market in this sector, has the potential to establish a strong presence in Japan as there is no competing solution of the technical level of Nomad Digital.

The firm’s innovative approaches and blend of three key assets—information technology and experts in the areas of telecommunications and railways—have won it a number of domestic and international awards, and placed it high in the past two Sunday Times Tech Track 100 league tables that rank Britain’s top 100 private tech firms with the fastest-growing sales.

Nomad understands the technical and safety requirements of train installations, and has worked in Japan to understand the specifics of Japanese regulations and customers’ requirements, Dando added.

“Japanese railways, especially the Shinkansen lines, have an enviable reputation worldwide for service, reliability and punctuality”, according to Damian Bryant, regional director for the Asia–Pacific region. “We believe that we can help Japanese rail operators raise customer service levels and customer experience even higher, with our technology”.

Cracking the Japanese market was never going to be a straightforward process, Dando admitted. But doing so was made possible thanks to a combination of Nomad being recognised as a world leader in the field, a track record of working with Japanese train builders in Europe and Dubai, as well as assistance from the UK Department of Trade and Industry team at the British Embassy Tokyo.

Describing the assistance as “invaluable”, Dando said, “The UKTI [UK Trade & Investment] team at the embassy acts as Nomad Japan and we would be lost without their support and presence.

“We could have tried by ourselves, but we now know that we would very quickly have discovered that it is too expensive and requires too much energy”, he added.

Nomad is currently engaged in trials with one of Japan’s major operators, and Dando sees plenty of opportunities here for the firm.

“[Japan] is a key market for us”, he told BCCJ ACUMEN. “We put stuff on trains, and they have lots of trains that currently do not have any competing solutions on them.

“The potential here is huge, because the railway industry moves so slowly and we have been working on this for 18 months, which gives us a good advantage”, he added.

As soon as the system is deployed on the first Japanese operator’s trains, Nomad intends to target the nation’s other train firms.
Ultimately, Dando said, if the business takes off, the firm will seek to establish Nomad Japan and corner a 50% share of the market here. 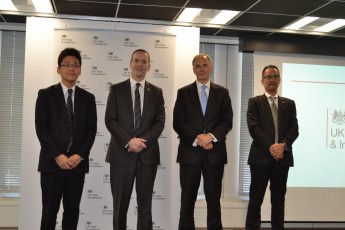