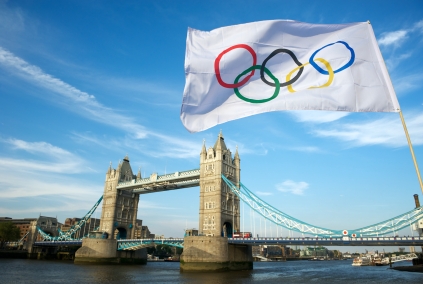 What a difference from the city’s last Olympics

As the host of two previous Olympics—in 1908 and 1948—London is the only city to hold one of the world’s greatest events three times. With the 2012 Olympic and Paralympic Games set to start on 27 July, there hasn’t been as much excitement in the London air since 1948—the last time the country stared austerity in the face.

The 1940 Summer Olympics—originally awarded to Tokyo but suspended due to the outbreak of WWII—were postponed until 1944, and given to London by the International Olympic Committee, only to be cancelled again as the war dragged on.

Then with only three years in which to prepare, the UK bravely agreed to host the Games in 1948. WWII aggressors Germany and Japan were not allowed to participate, while the Soviet Union chose not to attend.

Struggling to recover from six years of war, with much of Britain still in ruins—food and clothing rationed and housing in short supply—these became known as the austerity games. Britain finished 12th in the unofficial medal count, but it was the participation, rather than the winning, that really counted.

The public fiercely debated whether it was appropriate to hold such a major event while millions of people were still suffering, but the general hope was that the Olympics would help bring Britain and the rest of the world closer together in times of renewed peace.

This year, 10,500 athletes from 205 nations will compete in 302 events covering 39 disciplines. It is a substantial increase from the 4,000 competitors who participated in 1948, representing just 59 countries in 136 events.

In preparation for the 2012 event, east London’s Olympic Park site in Stratford has seen a burst of planning and building. Thirty-four purpose-built sporting venues have been constructed. They include the £537mn Olympic stadium, where most of the events will be held, and the Olympic Village, where athletes and officials will live during the 19-day spectacle.

For the 1948 “make-do-and-mend games”, Wembley Stadium, one of the few buildings to escape the war intact, was converted into an athletics stadium by placing 800 ton of cinders over the greyhound track. Male athletes slept in RAF camps and female participants were housed in London college dormitories. With organisers providing bedding, contestants brought their own towels.

Participants were fed a simple “working man’s diet”, bulking up their measly portions with whale meat, and spectators brought their own food from home—reducing the government’s responsibility to provide food and helping their overstretched budget.

The athletes housed at the Olympic Village this year each day will be served a total of 45,000 meals that will include 100t of meat, 19t of eggs and 330t of fruit and vegetables over the entire Olympic period. Some 14mn meals are expected to be served during the Games at all official venues.

About 20,000 media personnel will be attending the event. It was broadcast for the first time on TV in 1948 by the BBC, which paid £1,000 for the exclusive rights. While modern athletes have a reputation for extravagant sponsorship deals and endorsements, it is sobering to recall that their 1948 counterparts were allocated half a locker each, a mirror and a water bottle—and a pat on the back for their efforts.

Even though the Olympics are expected to boost the London economy by the equivalent of $80bn by 2015, and to generate 12,000 new jobs in the Olympic Park, the high cost of the Games in tough economic times has generated much criticism, and a great deal of debate regarding whether London is the right city to host the event.

No matter what the banks may say, the Olympics have given us an opportunity to embrace tradition and our “Britishness”. With a new found optimism and sense of national pride, we are made to explore our heritage and focus on what it means to be British—especially during times of hardship.

Maybe not that much has changed since 1948.