Lord Sebastian Coe, chairman of the London 2012 Olympic and Paralympic Games organising committee, offered Tokyo some advice on how to bid successfully for the 2020 event: focus on the why, not the how.

Coe’s moving 2005 speech, about how the Olympics inspired his own sporting career, is often credited for tipping the balance in favour of the UK capital’s bid to host the games. During a busy visit to Japan in late February, he chatted with numerous Japanese officials, including Tokyo Governor Shintaro Ishihara.

“The most important thing—and I think it distinguishes the cities in large part—is why do you want [the Olympics]? What do you want to do with [the games]? It’s as important, and probably more important, to ask that question than simply [to ask] how you are going to deliver it,” Coe told reporters at the Foreign Correspondents’ Club of Japan.

“Of course, for people like me, it will always be about using the games as a way of attracting more young people into sport”.

The meeting with Ishihara came on the busy Japan leg of a world tour, as London counts down to the opening ceremony on 27 July.

Coe, a double Olympic gold medal winner, also met Sports Minister Tenzo Okumura and Japanese athletes preparing for the games at the National Training Centre. He talked sport with Japanese high school students, and visited the National Olympic Stadium, the venue for some events in the 1964 games.

Tokyo submitted its formal bid to host the 2020 Olympics in February, after losing out to Rio de Janeiro in the competition to hold the 2016 games. This time, it is up against Madrid, Istanbul, Doha (Qatar), and Baku (Azerbaijan). 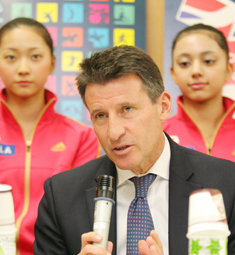 Lord Sebastian Coe addresses the media at the National Training Center, flanked by members of the Japanese rhythmic gymnastics teams

In a presentation to the International Olympic Committee in Singapore in 2005, Coe famously spoke of how he had been inspired as a child by watching on television the 1968 Mexico Games, at which two athletes from his local city of Sheffield won medals. He went on to become a household name in Britain when he clinched the 1,500m Olympic gold in 1980 and 1984, later parlaying his popularity into a political career, which placed him perfectly to spearhead London’s 2012 bid.

But Coe acknowledges that he carved out his own successful sporting career in a simpler age when there were fewer forms of entertainment competing for young people’s attention.

“When I started in sport, I was living in a country with three television channels, no mobile phones, no fast internet connection, no social network sites”, he said. “Life was fairly uncomplicated and sport played a bigger role in the lives of young people simply because it wasn’t in huge competition with other areas of activity”, he added.

Bringing sport into the lives of today’s young people will mean taking advantage of new media, Coe said. But changing attitudes and inspiring youth can also come in more direct ways, such as bringing a Paralympic champion into the classroom as the country prepares to host the Paralympic Games from August 29.

“When you take a Paralympian into a school of so-called able-bodied people and you explain to young children in there that the Paralympian can jump the height of the door frame in their classroom, it rather recalibrates the way young people see disability”, Coe said. “Paralympians are doing what 99% of the able-bodied population can’t get within a country mile of”, he added.

Coe studied and trained at Loughborough University early in his career and said he was delighted that Japan had picked the university as the venue for its pre-games training camp, alongside Team GB.

“Loughborough is an extraordinary place”, said Coe, who has retained close ties with his alma mater and plans to take up a position as pro-chancellor there after the London games are over. “It has helped develop the careers of many, many Olympians, particularly in track and field, but more broadly in other fields, such as rugby and cricket. The sports science course is one of the most over-subscribed degree courses anywhere in the country”.

“If you look at the contribution Loughborough University has made, both to individual competitors and also coach education and sport science and high quality coaching, it’s way, way beyond the United Kingdom. There’s hardly a country in the world that hasn’t been impacted in some way or another by that university”.