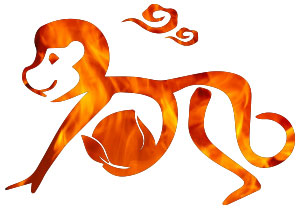 With the start of the lunar New Year on 8 February, we are now in the Year of the Monkey, the ninth of the 12 animals in the recurring 12-year cycle of the Chinese zodiac.

According to Chinese astrology, each year is also associated with one of the five elements: metal, water, wood, fire or earth.

The element and sign combinations recur every 60 years, and both the sign and element of your birth year are said to affect your personality and destiny. This year is that of the Fire Monkey.

People born in the Year of the Monkey are generally considered to be witty and intelligent with magnetic personalities. However, the combination of mischievousness, curiosity and cleverness can make them appear to be naughty; they are masters of practical jokes.

Most astrologers hold that a monkey year is one in which anything can happen: “Things will get accomplished, but largely through personal and individual efforts”.

That may be of some comfort to Prime Minister Shinzo Abe as he heads towards the Upper House election, expected in July. He must be hoping for some of the monkey magic to rub off as Abenomics lately has taken something of a bashing.

Recently released figures show that GDP fell 1.4% in the last quarter of 2015, and the Bank of Japan’s January move to introduce negative interest rates has also led to a rise in the yen and a fall in stocks. The Nikkei 225 plunged dramatically to below the 15,000-point level before rebounding but, even then, it closed at a level far lower than it had last year, at 19,033.

Critics say this is a clear indication that Abenomics is turning out to be a failure. Kyodo News recently reported on a survey that showed the support rate for Abe’s cabinet had fallen 7 percentage points to 46.7% compared with the previous month.

However, this may not be entirely due to dissatisfaction over Abe’s economic policy.

At the end of January, Akira Amari, minister of state for economic and fiscal policy, relinquished the post after allegations of graft made against him and his aides.

Meanwhile, in February, Kensuke Miyazaki of the Liberal Democratic Party resigned after admitting to having had an affair while his wife—also an LDP Diet member—was about to give birth.

Prime Minister David Cameron, too, must be hoping the stars are in alignment as he has signalled the countdown to the UK referendum, on 23 June, to determine whether the country remains in the European Union (EU).

Cameron made the announcement after his return from a marathon summit in Brussels, where he claimed to have negotiated “special status” for the UK in the EU. The unanimous agreement came after two days and nights of talks during which European leaders resisted the major reforms Cameron was seeking.

But, in the end, Cameron said he was satisfied and could now campaign to persuade the British people to remain in a reformed EU. He cited a seven-year “emergency brake” on welfare payments to EU migrants, and said that Britain would be “permanently out of ever-closer union”.

However, Cameron’s battles are really just beginning. While he may feel that he triumphed in Brussels, at home he faces the Eurosceptics of the Conservative Party and a hostile tabloid press that is largely calling for what is being termed a Brexit.

Opinion polls are divided and suggest that the British public is precariously balanced on whether to stay in or to leave the EU.

One of Cameron’s closest friends and allies, Michael Gove, justice secretary, has said he will support the UK leaving the EU, as has Boris Johnson, mayor of London. Meanwhile, leading figures from some of the country’s largest FTSE 1000 companies have signed a letter supporting Cameron’s position.

The Year of the Monkey is a time for taking risks, a year when “inventive minds, sheer guts and bravado will win out”. Cameron will be hoping that his Brussels “special status” deal will fit the bill.