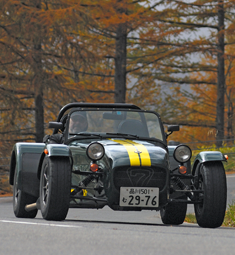 The Caterham Seven was made for mountain driving.

Caterham Cars was set to unveil a new addition to its line-up at the Frankfurt Motor Show on 10 September.

The latest vehicle, being built together with one of Japan’s largest car manufacturers, is certain to provoke new Japanese interest in the marque and to be equally at home on the roads of Europe.

The concept behind the new Caterham Seven is the result of constant prodding over the past two decades by Justin Gardiner, brand director of Caterham Cars Japan.

“When Caterham first offered me this job back in 2006, I said that we should make a kei car [a light car which is a Japanese category of small vehicles] because it would be perfect for the Japanese market”, Gardiner said. “And that is something that I have been saying firms like Rover, MG and Lotus should be doing for 20 years now”.

A kei car is defined by the Japanese government as having a maximum engine displacement of less than 660cc and being within strict size dimensions, in return for which the vehicle excise tax, the automobile weight tax, and the annual road tax are levied at lower rates.

Additionally, there is no need to ensure parking in much of Japan, and insurance premiums are significantly reduced.

This makes them so popular with Japanese consumers that more than 40% of vehicles sold in the country carry the familiar yellow plates marking them as kei cars.

Similar tax breaks are available in other countries, too. The UK provides tax breaks on vehicles that emit less than 100g of CO2 per kilometer, which puts the low-emission kei car in the same bracket as an eco car.

Another benefit is that the vehicle’s clean engine makes the car exempt from central London’s notorious congestion charge.

All these factors support Gardiner’s belief that the new working relationship with Suzuki Motor Corporation—which has experience and know-how with kei cars and builds the bestselling Wagon-R series—has so much potential. 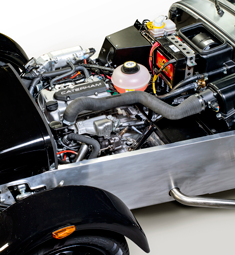 The new Caterham is fitted with a smaller, 660cc engine.

“For Caterham, this is very much a case of us going back to our roots, when we made the car as light as possible and put a small engine in it”, he said. “And I am certain that it will sell in this market”.

Founded by Graham Nearn in 1973, the Caterham Seven is a direct evolution of the Series 3 Lotus Seven that was designed by Colin Chapman. The car earned a reputation among enthusiasts as one of the most iconic sports cars of the 20th century and was one of the pioneers of kit cars that allowed drivers to construct their own vehicles.

In April 2011, Tony Fernandes, the owner of AirAsia and Queens Park Rangers Football Club, added the auto firm to his portfolio.

With the support of both Caterham and Suzuki, Gardiner worked on developing the car with renowned engineer Aki Musashino, who learned his skills in garages in the East End of London and now restores Formula 1 racing cars.

While the instantly recognisable body of the Caterham Seven remains, the new car has been fitted with a Suzuki 660cc engine, out of which Gardiner has been able to coax 154kph.

Similarly, the gearbox, axles, differential and rear brakes are all from a Suzuki van. They are being shipped from Hamamatsu Port, near the firm’s Shizuoka headquarters, to Caterham’s factory in Dartford, Kent.

The new car was developed under the strictest secrecy over two years, although a Japanese magazine came close to spilling the beans after one of its journalists spotted Gardiner putting a prototype car through its paces at the Fuji Speedway race track.

Fortunately, the magazine leapt to the wrong conclusions and reported that the Caterham–Suzuki alliance was to build a new version of the Suzuki Cappuccino, a two-door roadster that was hugely popular with owners but only in production for seven years from 1991.

“From the outside, the car looks the same as any Caterham”, said Gardiner, who purchased several Suzuki kei cars on Yahoo Auctions from which he salvaged engines, gearboxes and axles for the first prototype. “The difference is that the regular version weighs 550kg, but this one is down to 400kg”, he said.

That power-to-weight ratio enabled the prototype to sail past Porsches on the bends at Fuji Speedway, although Gardiner admits the German cars’ power enabled them to catch him up again on the straight stretches, with the braking and handling both “marvellous”, he added.

“The size of the vehicle is completely appropriate for Japan, and its speed enables it to dart through the traffic here”, he said.

“The Germans and Italians do love to drive fast on the motorways of Europe, but the dedicated Japanese driver prefers to test himself on the tight roads of the mountains”, he said. “That is the mark of a driver in Japan—because any fool can go fast in a straight line—and that means this Caterham is perfectly designed for Japan”.

The kei Caterham will be available for order from October, and will be priced at around ¥3mn. Gardiner anticipates he will be able to double his present monthly sales figure of five cars.