British Airways has been flying the flag into Japan for 70 years—and has big plans for the service that it provides in the air and on the ground in the decades to come.

Demand is high among both business and leisure travellers flying between Japan and Britain, said Moran Birger, regional manager for the UK’s leading airline for Japan, South Korea and Thailand, while an ambitious £4.5bn investment programme over the next five years is designed to take British Airways to new heights.

“Business is very good”, said Birger. “And that, I think, is demonstrated by the decision last year to add extra flights between Tokyo and London with our joint venture partner, Japan Airlines, so that there are now four flights every day on the route”.

British Airways operates two of those daily flights, one from Haneda Airport and the other from Narita International Airport, providing a good mix of business and leisure travel options, he added.

“We are responding to the demands of the market by adding these flights and the growing capacity demonstrates the popularity of the route” Birger said.

Wi-Fi rollout
Business travellers like being able to fly into Haneda, because of its convenient access to the heart of Tokyo, while Japanese tourists choose British Airways because they enjoy British courtesy and service, he said, meaning that the flight is an important and integral part of their vacation.

And with the enhancements that are in the pipeline, there will be even more reasons to fly with British Airways, Birger believes.

The airline plans to purchase no fewer than 72 new aircraft in the coming few years, including variants of the state-of-the-art Airbus A350 and Boeing 787-10s. At the same time, 128 of its long-haul jets will be undergoing extensive refits that will equip them with the latest seats and entertainment systems.

Wi-Fi is being rolled out later this year—the airline has been assessing the very best capabilities before installing the service—and power points will be made available on all aircraft.

Some £600mn is being lavished on the airline’s Business Class, including a collaboration with London-based The White Company to provide luxurious pillows and duvets for seats that morph into completely flat beds.

On-board meals are also undergoing a revolu­tion, with the addition of more options throughout the aircraft.

On the ground, British Airways has introduced The First Wing for first class passengers. This dedicated walkway, from check-in to the lounges at Heathrow’s Terminal 5, has all the luxuries that a traveller could expect but also the added bonus of a dedicated check-in area and security screening, meaning that a passenger can go from the terminal entrance to sipping champagne in the departures lounge in a matter of minutes. 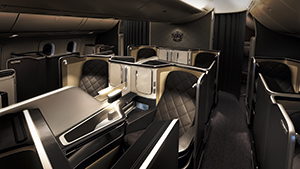 The first-class section on a British Airways 787

Looking ahead
More in-flight changes are planned for 2019, including a new business class seat and cabin layout that gives every seat access to the aisle and use of the entertainment system from gate to gate.

It is all a far cry from March 1948, when the first flying boat in the livery of British Overseas Airways Corp.—the predecessor of British Airways—took off from Poole in Dorset for a seven-day journey that included stops in Alexandria, Karachi, Bangkok and Hong Kong before arriving in Japan. The first British Airways aircraft touched down at Haneda in 1973.

“Japan is an extremely important market for us and, in the last 70 years, we have learned a great deal about Japanese passengers’ needs”, said Birger. “We also believe there is great scope for development of this route as well, and we anticipate Japan opening up even further to tourism in the coming five or 10 years—helped, of course, by the Rugby World Cup next year and the Tokyo 2020 Olympic and Paralympic Games.

“So we are not just celebrating the last 70 years; we are very much looking forward to the next 70”, he added.